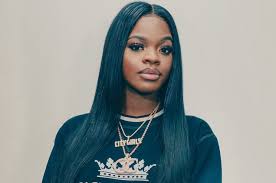 JT of City Girls Has Just Been Released from Prison, She Celebrates By Dropping Music – “My First Day Out”

Rapper JT is one half of the hip-hop duo City Girls.

(CNN)JT is free.The rapper, born Jatavia Johnson, is one half of the Miami rap duo City Girls and newly home from prison.Johnson had been open about the two-year sentence for credit card fraud she began serving in 2018 and is now celebrating her release just as publicly.”B***H IM RIGHT ON TIME FOR THE SEASON CHANGE #firstdayout #jtfree,” the caption read on a photo posted of her late Tuesday on her official Instagram account.

The City Girls account featured the same photo, and shortly after came the release of the single, “First Day Out.”

“Now I’m up, but I could write a book about the rainy days,” Johnson raps in the new song. “I don’t gotta throw shade to get a fan base.”The rapper was released on Tuesday, according to the City Girls Instagram account. Yung Miami (Caresha Brownlee) is the other half of City Girls.The duo has been on the rap scene since 2017 and garnered national attention after Drake featured them in his hit single, “In My Feelings.”