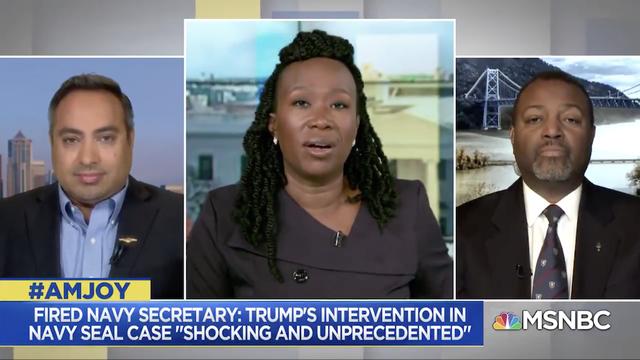 Reid, who hosts “AM Joy,” tweeted video of her issuing the “very big correction” later during the segment around noon on Sunday.

“I want to make a quick correction. This is a pretty big correction. Earlier in the segment as we were talking about former Navy Secretary Richard Spencer, we mistakenly showed the wrong image of white supremacist Richard Spencer,” she said in the clip.

The MSNBC host went on to add that the network is “very, deeply sorry for that mistake.”

The photo mishap came during a portion of the segment when Reid and other panelists on the program were discussing an op-ed the former secretary penned in The Washington Post earlier this week, in which he takes aim at President Trump for repeatedly involving himself in the case of Chief Petty Officer Edward Gallagher.

In the op-ed, the secretary called Trump’s attempts to intervene in a military review of Gallagher, who had been accused of multiple war crimes, a “shocking and unprecedented intervention in a low-level review.” The op-ed came three days after the official was ousted from his role over his handling of the controversial case.

The photo mishap did not go unnoticed on Twitter.

White nationalist leader Richard Spencer also commented on the mix-up, saying: “On some deep, unconscious level, America wants me to be in charge of the U.S. Navy.”

Spencer is one of the country’s most prominent white nationalist leaders. He is known for his efforts in helping organize the deadly “Unite the Right” rally in August 2017 that led to the death of counter-protester Heather Heyer. According to the southern Poverty Law Center, he has also been credited with coining the term “alt-right.”

A Substitute Told Fifth Graders That ‘Homosexuality Is Wrong.’ She Was Escorted Out After 3 Students Spoke Up