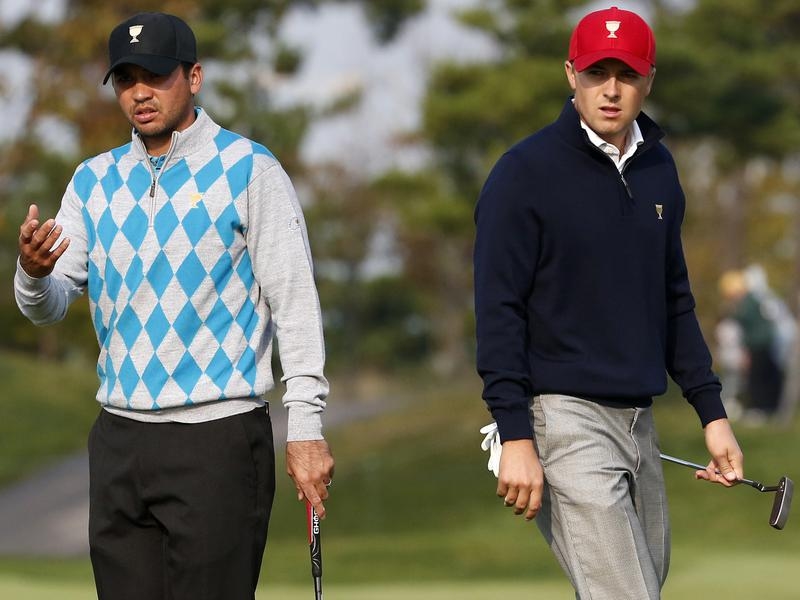 Even when he’s not playing, Tiger Woods lords over a golf event. He doesn’t make a swing, says little publicly, and rarely shows any kind of demonstrative emotion. But...
by Zach Freeman October 2, 2017 541 Views 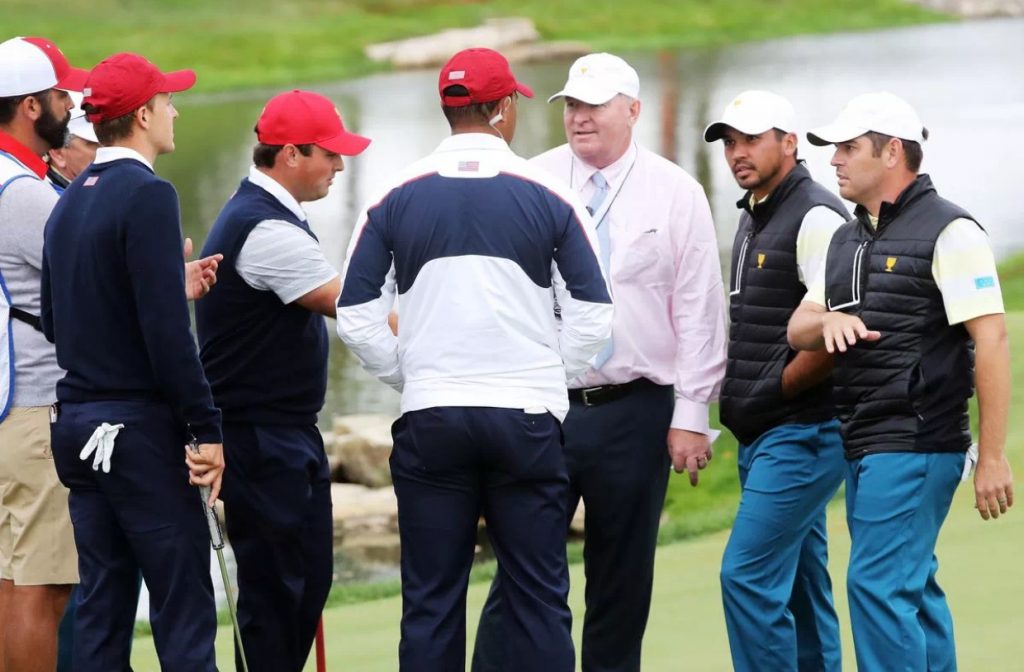 Even when he’s not playing, Tiger Woods lords over a golf event. He doesn’t make a swing, says little publicly, and rarely shows any kind of demonstrative emotion. But his presence changes the dynamic of these team events, and we’ve seen that for the second straight year at this week’s Presidents Cup. When he’s following a match, or walking through the crowd, more eyes are often on the assistant captain than the actual play.

So it must have felt just a tad intimidating for walking rules official Andy McFee on Saturday afternoon when not only Jordan Spieth got up in his kitchen to argue a ruling, but also the Big Cat himself. McFee is a bit of legend and well-known official at this point, so it was going to be tough arguing him out of a call. And he promptly rebuffed Woods, who came charging in from off the green, with an extremely eyes-emoji line to the 14-time major winner. The folks from Skratch isolated the audio:
Ok, so it’s not the most brutal rejection but that he dared blow off the Big Cat at all made this noteworthy. So what was all the drama about?

The match between Spieth and partner Patrick Reed against Jason Day and Louis Oosthuizen was all square at the 12th hole. They were playing the four-ball format, which means all four play their own ball from the tee box and in, and the best of your team’s two smashes up against the best of the opponent’s two scores.

The International team of Oosthuizen and Day were going to make a birdie on the 12th, at worst. It’s a short drivable par-4. Day hit his drive, then pitched an approach shot to two feet for the birdie. Oosthuizen hit his drive over the green and, theoretically, could get in for eagle from off the green and the win. Day’s ball had them in the hole for birdie though, no matter what.

Reed’s birdie try failed but Spieth was left with the US team’s best chance to halve the hole from about 12 feet. But first came Oosthuizen’s longshot eagle putt from off the green. Oosty hammered the ball, knowing that they were already in for birdie and well, the ball can’t go in the hole if you don’t get it there. It missed the cup and with it racing by and toward the water, Spieth decided to stop it with his putter and pick it up for his opponent. The putt did not matter at that point – he’d missed the hole and Day was already in for birdie.

Spieth added that not only was he just trying to save his opponent some time by stopping the ball and tossing it to him, but he was also trying to shut up his home crowd, which was exhorting the ball to keep rolling toward and into the water – something you might call “unsporting” in the genteel world of golf. Spieth was just trying help in a couple different ways.
The rule broken by Spieth’s harmless mistake

By stopping the ball, Spieth broke Rule 1-2, which includes the language that a player “must not take an action with the intent to influence the movement of a ball in play.” In a fantasy world, Oosthuizen’s ball could have done a u-turn and climbed back up the hill and gone into the hole but Spieth was “exerting influence” when he touched it.

McFee, who is a veteran with these things, saw it and was all over it immediately. The move meant Spieth was disqualified from the hole, and the USA’s shot at birdie vanished. That would put the Internationals 1-up with six holes to go and while this Presidents Cup is not in doubt, the unstoppable USA pair obviously wanted their damn point (they would comeback and get it over the final six holes).

So you can see why the result was a prolonged discussion, with Spieth bringing Tiger in from off the green and International captain Nick Price also getting involved. Tiger had asked McFee to re-phrase the way he was putting it over the comms line, and that’s how we got to the official telling the 14-time major winner to buzz off.

Oosthuizen and Day thought the ruling made no sense and didn’t want to win the hole that way. They had already moved on toward the next tee box when McFee jumped in before Spieth could putt. Both came back onto the green to get in the discussion, exhorting the official to just let Spieth putt or let them also concede the hole.

Spieth appreciated it but said it was basically out of their hands and into the official’s that point.

Once it was clear the USA had lost the hole, the Internationals also tried to then auto-concede the next hole, the 13th. As Spieth and Reed walked up to the tee box, Day and Oosty started to walk off, saying they would just concede a hole right back to make things all square again with five to play. It was a nice gesture but the US pair said it wasn’t necessary and just wanted to play on up the 13th.

It’s a dumb rule, but the outcome was appropriate (and still dumb)

This is yet another instance where the rules of golf fly right in the face of common sense. It’s hard to get angry at McFee for stepping in to enforce it when he saw a clear violation. That’s his job.

You also don’t want players negotiating around a rule, or rendering the ruling meaningless. The Internationals coming on the green to say just let him putt was nice, but deals between opponents, even if it makes sense, would seem to be a slippery slope that you don’t want to start down. Just let the official make the call and have that power.

The solution is re-writing the rule so there’s a common sense out when something like this happens next time. Spieth was adamant that this has to happen during a bunch of matches at these things and McFee just spotted his and jumped on it. That may be the case and while there should obviously be a rule protecting a player from an opponent “exerting influence,” there needs to be some sort of out-clause or corollary for this instance when it’s clear the ball in play does not matter.

It would put everyone in a more comfortable position, including the rules official who had to stiff-arm the most accomplished and intimidating force on the property this week.

Are You Ready for a Cyber Monday?!? Check out these Savings Ahead of Time!