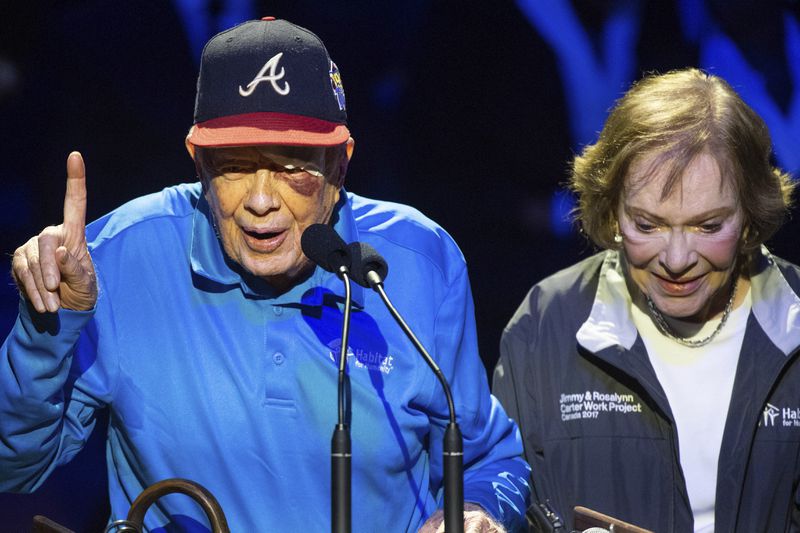 Former President Jimmy Carter sported a bandage over his left eye Monday as he helped build a home with Habitat for Humanity in Tennessee just one day after suffering a fall. Watch the latest video at...
by Raquel Jayson October 7, 2019 182 Views

Former President Jimmy Carter sported a bandage over his left eye Monday as he helped build a home with Habitat for Humanity in Tennessee just one day after suffering a fall.

Carter, 95, needed 14 stitches above his brow after falling in his Plains, Ga., home early Sunday. But the oldest living U.S. president didn’t let the injury keep him from helping the nonprofit Christian housing organization.

“I had a No. 1 priority and that was to come to Nashville and build houses,” Carter told a crowd at a charity concert Sunday evening in Music City when addressing his brief hospital visit.

Jimmy Carter got a black eye and 14 stitches to the head after a weekend fall at his Georgia home. But the 95-year-old ex-president still made it to a Habitat for Humanity concert tribute in Nashville. https://t.co/gZ9S8BS9uO

He stayed true to his word Monday, participating in his 36th building project with Habitat for Humanity.

Carter, whose birthday was Oct. 1, appeared at the build site with his left eye swollen and bruised. He had a white bandage above his eye. His wife, former First Lady Rosalynn Carter, 92, joined him.

Photos and video showed Carter drilling screws into pieces of wood as he began work on one of the 21 homes scheduled to be built in a Nashville neighborhood.

Before construction began, Carter led a morning devotion for a group of several hundred volunteers.

Carter said God gives us life and freedom. “With our freedom, every one of us can make a basic decision. … ‘What kind of person do I, myself, choose to be?'”

He said every person “can be a complete success in the eyes of God.”

Carter, who served as the 39th commander in chief from 1977 until 1981, has suffered health issues over the last several years. He broke his hip after a fall in his home this past May and underwent successful surgery. He also survived a grim cancer diagnosis in 2015

It’s Confirmed That Jamie Foxx And Katie Holmes Are No More!