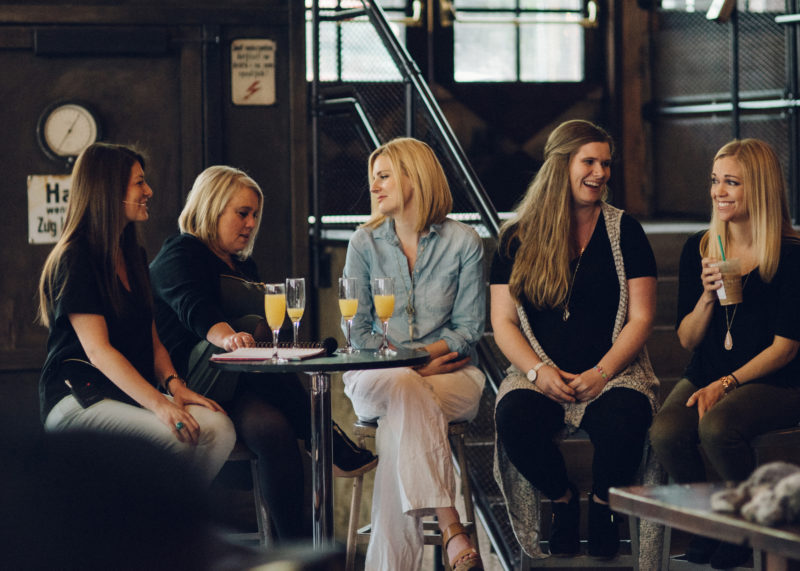 It’s Called, “Bar Church” And It’s Literally A Bar Set Up And You Can Get A Beer! Read As The Pastor Projects What Church Is Soon To Look Like

It’s called Bar Church and yes, you can get a beer at worship if you want. But don’t get stuck there. Go beyond the surface and think about what church...
by Raquel Jayson November 13, 2019 211 Views

It’s called Bar Church and yes, you can get a beer at worship if you want.

But don’t get stuck there. Go beyond the surface and think about what church might look like in 20 or 30 years. Think about the idea of people gathering for spiritual conversation and connection in places that aren’t churches. Think about the reality that more and more Americans – particularly young people – have no connection to the institutional church.

Think about the idea of “third places” – places where people of faith build relationships with the local community by really listening to what the people who live there want and need. Think about what might happen by creating such a place — even if it is nothing like people think of as Sunday morning church.

Seattle – full of young adults and located in what’s considered to be one of the most secular parts of the country – is in some ways serving as a testing ground for what religion of the future could look like. It’s a fluid mix of evangelicalism and “no religious affiliation” and immigrant congregations and experimentation. Here, faith communities are starting businesses (coffee shops, event spaces and more) and using square footage in ways that builds connections — for example, through creating co-working spaces and art galleries.

Bar Church (“Low Bar, High Spirits,” its website promises) meets twice a month in the Ballard neighborhood of Seattle — a walkable neighborhood northwest of downtown that’s dotted with restaurants and coffee shops, boutiques, a pie bar, a yoga studio and a gourmet ice cream store with a line out the door night and day. It’s nestled next to a tattoo parlor and just down the block from where the vibrant Ballard Farmers Market sets up each Sunday — a mecca of fresh produce, seafood, eggs, wine, artisanal cheese and Washington berry jams.

Zach Brown, left, a firefighter, said the more Bar Church veers towards traditional church or Bible study, the less he is likely to attend.

Bar Church, which is not a Presbyterian congregation, becomes a church when someone from the team opens the door and sets a sign out on the sidewalk. The rest of the time, the building is used as private event space called Cathedral — rented out to help cover costs and with some of the profits donated to charity. Bar Church gathers here two Sundays a month for a reflection on the topic of the day, once a month to work on a service project (such as making brown bag lunches for people who are homeless) and once for brunch.

The founders of Bar Church are two couples in their early 30s: Derek Luckett and his wife, Natalie, and Nate and Amy Stone, all of whom had connections to Eastlake Community Church in Bothell, Washington, an evangelical megachurch that experienced a rift when its founder, Ryan Meeks, said the church would be “open and affirming” to LGBTQ+ people.

Derek Luckett said they started Bar Church about two and a half years ago – meeting at first at the Queen Anne Beerhall – in an effort to create community that’s more closely connected to the way many young people live today.

“The church model of sitting in rows and facing that person who talks to you and coming back the next week and doing it again” doesn’t resonate with a lot of people, he said. At Bar Church, “some days everybody grabs a mimosa. Other days it’s mostly coffee. … We practice church in a more normal way, as we practice life. Can we open up a conversation (in church) in the same way we have conversations in life?”

Zach Brown, 34, has come to Bar Church a few times, but still isn’t sure what he thinks.

At first, “I was a fan of it because they didn’t talk about anything church-related,” Brown said. “I think that’s changed in the last few months, so my attendance has been down a bit.”

Nate and Amy Stone, some of the co-founders of Bar Church, talked about unplugging from technology has brought their family closer and freed up more time.

Brown, a firefighter, spent his childhood in Chicago, then lived in Oklahoma before moving to Seattle. He grew up Lutheran, but said, “When I turned 21, some life events made me question stuff,” so he pulled away from church. In the West, “religion is not as central to life as it is in the Midwest,” Brown said.

He’s still not interested in traditional church. He sees the Bible as “a very interesting historical document,” and is giving Bar Church a try because he wants to build deeper relationships and community, and is interested in discussing some of the social issues Bar Church has taken on, such as identity or tribalism or, on this day, about unplugging from social media. The more Bar Church veers towards traditional church talk or Bible study, Brown said, the more likely he is to step away.

Across the nation, the numbers of religiously unaffiliated are rising everywhere, from the cities to the rural areas, according to Robert P. Jones, founder and chief executive officer of the Public Religion Research Institute. “It’s Kansas, it’s Oklahoma, it’s Kentucky,” Jones said an address last spring at Louisville Presbyterian Theological Seminary. “It’s being felt everywhere.”

Christopher B. James, an assistant professor of evangelism and missional Christianity at the University of Dubuque Theological Seminary, has written a book, “Church Planting in Post-Christian Soil,” in which he examined new churches begun in Seattle from 2001 to 2014. He looked in part at what Seattle – where close to four in 10 adults are religiously unaffiliated – has to show the rest of the country.

One of the approaches James studied was the idea of a neighborhood incarnation of community. That’s not a classic church plant. This is something new, a sort of “third place” shaped by a deep identification with its immediate neighborhood.

James talks about the concept of “belonging before believing” — of building relationships first, intentionally “creating spaces in which Jesus followers and the interests of the community could be practicing together, even if they’re not necessarily on the same page as far as doctrine or affiliation.”

As part of his research, he spoke with Ben Katt, the founder of Awake Church, who described the idea of creating “a Christian community in and for the neighborhood.” To get started, Awake held backyard barbecues and block parties to form connections, in time acquiring a storefront space on Aurora Avenue, providing a place of hospitality and welcome in a neighborhood where prostitution and homelessness and drug use are part of the landscape.

At Aurora Commons, people can cook in the kitchen. Women-only programs are offered for women who work in the sex trade, including a clinic where people can receive services ranging from contraception to wound care. “Chaplains of presence” are available for conversation, support and encouragement — or just to sit with someone. People can play the piano or write poetry or make art. In time, trust and relationships form.

With these kinds of third place incarnations, “a key thing … is space for human connection and dignity and belonging,” James said. There’s also a “blurring of the lines between sacred and secular space.”

Another reality: third-place communities tend to be evolving, contextual, not necessarily permanent. With these kinds of experiments, “we’re not going to know what’s going to stick to the wall for quite a while,” James said, “let alone how we create financial models for what will stick to the wall.”

In some places, congregations are also looking for new ways to use their physical assets. Valley and Mountain is a United Methodist spiritual community that began in 2010 in Rainier Valley with a focus on listening, liberation and radical hospitality. A few years later, Valley and Mountain partnered with a local artist collective to lease space in a building and to open the Hillman City Collaboratory, which describes itself as a “social change incubator” and provides co-working space for more than two dozen social change organizations, as well as an urban farm, a drop-in center for homeless people and more.

Valley and Mountain has now opened a second site, made possible when an aging United Methodist congregation in the Ravenna neighborhood decided to end its life as a worshipping community and give its building to Valley and Mountain — the end of an old way of being, the start of something new.

It’s not just Seattle. In Dubuque, one of James’ neighbors owns a brewery, and began holding a monthly event in his home called New World Brewing, with the idea that “we’re brewing a new world, one conversation at a time.” This is not a form of Theology on Tap, James said, but the idea of creating community around conversation about things like gardening or urban cycling or local elections.

New World Brewing been going for a few years now, typically drawing 25 to 40 people. It’s a space “where you can be your own authentic self,” and hierarchy is left at the door, James said. “That’s not church. That’s not going to become church. But that is replacing the narthex that has been absent from our society for a long time.”

In medieval churches, “narthexes were actually spaces between the world and the church,” where people could bear witness to what Christians believe, he said.

His friend’s intention in hosting these gatherings was to “get out of the church-exclusive bubble” and to say “this is the kind of place where I would love Christians to be present along with others, to be building friendships, to be speaking to these issues from their identity as followers of Jesus. … This is classically what mission has always done.”

Back at Bar Church, Nate and Amy Stone led a discussion on unplugging from technology — starting off by asking everyone to silence their phones and put them on a table off to the side. On this particular Sunday, the crowd of about 20 was all young, all white, many of them couples.

During a talk on unplugging from social media, people were asked to leave their phones on a table.

The Stones talked about what the research shows about Americans’ increasing use of social media, and their own decision, as parents of young children, to unplug regularly — turning off their phones at night and the television off five days a week. “It’s the best thing we’ve ever done,” Amy said. They’re working out more, reading more, talking more. “It’s the quickest way to give yourself time,” Nate said.

In a number of ways, this was not typical church. There was no mention of Jesus or the Bible until near the very end — when Nate referred to Jesus’ pattern of going away from the crowds to reflect and pray. It was not conversational either — the Stones talked for more than an hour, but didn’t ask those who’d come to share from their own experiences.

In the crowd were three friends who’d come to Bar Church together for the first time that day. Each was 28 years old and relatively new to Seattle. They’ve trying out congregations where they might fit in — church shopping together.

A group of young women visiting Bar Church for the first time talk to Nate Stone after the service.

What did they think?

“I like that it’s smaller” and “a little more laid back,” said Laura Dukovich.

By meeting in a bar, “it’s the idea in Scripture of being in the world but not of it,” said Dawson. Maybe, she suggested, a place where life and church can intersect.

Pastor claims he was fired for being gay