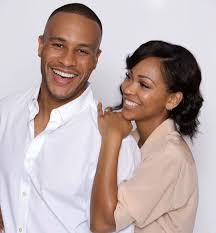 Is Motherhood In The Future For Megan Good?

Meagan Good Reveals She Froze Her Eggs Meagan Good, 38, and husband DeVon Franklin, 41, recently visited The Dr. Oz show to open about their marriage, their faith and their fertility journey....
by Jasmin Williams September 17, 2019 237 Views

Meagan Good, 38, and husband DeVon Franklin, 41, recently visited The Dr. Oz show to open about their marriage, their faith and their fertility journey. During the couple’s visit, which airs on September 13, they talked with Dr. Mehmet Oz about the journey they’re on to eventually have a child, including Meagan’s efforts to get in her best shape in preparation for their efforts to conceive a child.

“That’s a part of why I did the 30-day challenge as well, because I wanted to really set an affirmation into the world and say, ‘Okay. I’m preparing myself for things that I want career-wise, but I’m also preparing myself for having children,’” she said. “And again, for me it was really about how do I say to myself, like this is every part of me getting ready for that? So yeah, we’re in a place now where we’re looking to do it.”

And while the couple is ready to try, they revealed that months earlier, at the top of the year, they took the advice of Dr. Oz and decided that Meagan would freeze some of her eggs.

“As I’ve come on the show and we’ve been friends for years, you always encouraged us to freeze eggs. And so we did that,” Devon said. “At the beginning of the year, we froze eggs and we probably wouldn’t have done it without your urging. So thank you.”

Dr. Oz told them that he was proud of the couple for deciding to be open about that decision, and DeVon said the process, as well as the journey they’ve been on, taught him a lot about waiting and preparing.

“Before we got married, we spent a long time waiting and that waiting actually laid a foundation because in marriage  — we’ve been married for seven years. So we’ve had this dialogue about having kids. And I’ve wanted kids and she wasn’t ready and then there were times we were talking about it. Because we had the foundation of waiting in patience and preparing, it actually gave us the tools we needed to be successful in marriage. I think a lot of times we’re rushing. We’re in an Instagram society. We all want it now, but there’s a lot of value in just taking time, committing to the process, and letting the process take us where it wants us to be.”

As DeVon noted, he and Meagan have been married since 2012. During an interview alongside Intruder co-star Michael Ealy with Steve Harvey back in May, she opened up about feeling like she was ready to grow their family after years of waiting.

“I’ma say this, and it’s funny because I usually don’t talk about it because I was one of those people who knew I would be a mother later in life,” she said. “And we talk about it a lot. Like, [Michael Ealy] basically tried to convince me to start like last year. But now I think I’m in a place now where I’m actually ready.”