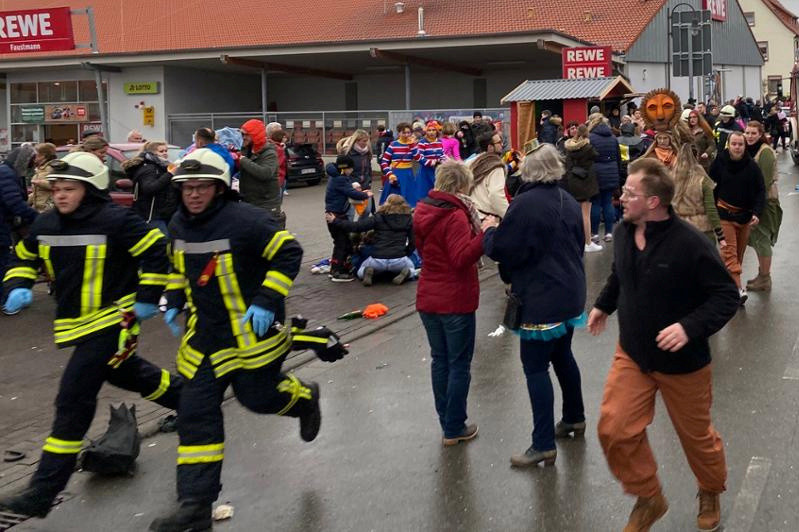 AT LEAST 15 people have been injured after a car mounted the pavement and crashed into crowds at a German carnival parade this afternoon. The driver was arrested at...
by Zach Freeman February 24, 2020 128 Views

AT LEAST 15 people have been injured after a car mounted the pavement and crashed into crowds at a German carnival parade this afternoon.

The driver was arrested at the scene of the carnage which left at least multiple people needing emergency medical treatment.

According to eyewitnesses, a silver-coloured Mercedes estate drove into a large group of locals on the pavement at around 2.30pm local time n the town of Volkmarsen, 15 miles west of Kassel.

One said the driver careered more than 30 metres into the crowds until the car eventually stopped.

The driver was still accelerating when police pulled him from the vehicle, news crews from broadcaster Hessenschau reported.

It is not yet known whether the shocking incident was the result of an accident or some kind of sickening attack.

Paramedics are now at the scene treating the injured – said to include several young children.

Dozens of ambulances and police units were called to the scene, as well as an emergency helicopter.

Volkmarsen is a town in the central German state of Hesse, in the north of the country.

Carnival celebrations – featuring floats – take place in Germany every year in the week before Ash Wednesday.

Today’s shocking incident comes a week after a far-right terrorist shot nine people dead, then killed his mother and himself in the German town of Hanau.

All his victims – which included a 35-year-old pregnant mum-of-two – came from migrant backgrounds.

The gun maniac’s body was found next to his dead 72-year-old mother in the early hours of Thursday morning.

Tobias Rathjen, 43, is believed to have bought a Glock 17, 9mm pistol legally online with a gun licence he had owned since 2013.