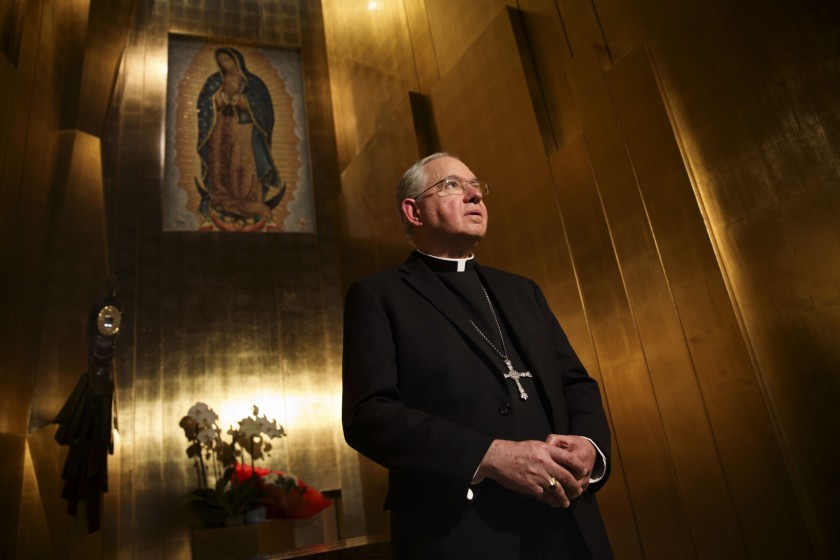 Los Angeles Archbishop José Gomez, the highest-ranking Latino in the U.S. Catholic Church, was elected president of the U.S. Conference of Catholic Bishops on Tuesday, marking the first time that a...
by Zach Freeman November 12, 2019 201 Views

Los Angeles Archbishop José Gomez, the highest-ranking Latino in the U.S. Catholic Church, was elected president of the U.S. Conference of Catholic Bishops on Tuesday, marking the first time that a Latino bishop has held the position.

Gomez’s election, which kicked off the second day of the bishops’ fall meeting in Baltimore, was regarded by many observers of the Roman Catholic Church as a fait accompli, a historic milestone set in motion in 2016 when he was selected as vice president of the national conference.

One of 10 nominees, Gomez garnered 176 votes cast both by bishops attending the conference and American bishops in Rome. His victory projected on the screen behind him, the prelate stood and thanked his counterparts, who greeted him with a standing ovation.

The bishops also elected Archbishop Allen H. Vigneron of Detroit as their next vice president. The vice president traditionally becomes the group’s president in three years, at the beginning of the next term.

Gomez, born in Monterrey, Mexico, has in recent years grown into a high-profile and authoritative voice in the American church, advocating for immigration reforms that would include a path to citizenship for immigrants living in the country illegally. The soft-spoken 67-year-old will begin his three-year term as president just as his tenure as vice president comes to an end.

Gomez’s ascendance comes amid Latinos’ shifting relationship with the Catholic faith: Latinos in the U.S. are no longer majority-Catholic, according to a Pew Research Center survey released last month. Some 47% describe themselves as Catholic, the survey showed, down from 57% a decade ago. At the same time, 23% of Latinos say they are religiously unaffiliated, up from 15% in 2009.

“This is huge,” Father Thomas J. Reese, a senior analyst at Religion News Service, said of the election. ” Having a Mexican American as the president of the bishops conference sends a real message to Hispanics across the country, showing that not only are they part of the church, they are part of the leadership of the church at the highest level.”

Gomez will take up his new position as spokesman for U.S. bishops at a time of bitter division over the Trump administration’s immigration policies, he added. The head of the largest and perhaps most diverse archdiocese in the country is himself a naturalized U.S. citizen.

Gomez, the first Latino archbishop of Los Angeles, succeeded Cardinal Roger Mahony in 2011 after he was relieved of public duties over his mishandling of clergy members’ sexual abuse of children.

The archbishop’s elevation comes as the U.S. Supreme Court this week reviews several appeals court rulings that have blocked President Trump’s 2017 order ending the Deferred Action for Childhood Arrivals program. More than 700,000 DACA recipients, known as Dreamers, currently live in the U.S, according to the National Immigration Law Center. They arrived on average at age 7, have lived here more than 20 years and are the parents of 256,000 children who are U.S. citizens.

L.A.’s archbishop is at once a conservative and a progressive: staunch in his opposition to abortion and same-sex marriage while tenacious in his advocacy for immigrants and the poor.

He is conservative in matters of Catholic doctrine. As the archbishop of the San Antonio archdiocese, Gomez emerged as a leading advocate for doctrinal conformity, determined to stave off what he saw as creeping secularism in the church.

But in 2013, Gomez publisheda book that voiced his support for a path to citizenship for the estimated 11 million immigrants living in the country without legal status. His advocacy aligns with efforts by Pope Francis to raise awareness about the challenges immigrants face.

“The fate of these young adults should never have been in the courts in the first place. And it would not be, if our leaders in Washington would simply set aside their political interests and come together to fix our nation’s broken immigration system,” Gomez wrote in a column on DACA last week.

In the U.S., he said, “we should not have young people living under the threat of deportation, their lives dependent on the outcome of a court case.”

“The issues at stake are legal, but they are also humanitarian, economic, and moral,” he added.

Gomez has called immigration the “reality of my own family,” his ardor for the cause culminating in passionate sermons, visits with migrant children separated from their parents at the border andfervent columns. He has assembled an immigration task force that includes representatives from the dioceses of Orange and San Bernardino.

When a gunman targeting Mexicans killed 22 people at a Walmart in El Paso in August, Gomez took a public stand against white supremacy. “A line has been crossed in our nation,” he wrote.

In September, Gomez led the Mass in Recognition of All Immigrants, during which he told his congregants that “this nation has been a beacon of hope, a refuge for peoples who have no place left to turn.” And on Monday night, his archdiocese hosted a rosary and Mass in solidarity with Dreamers, praying for them on the eve of the Supreme Court hearing.

American bishops oppose “enforcement only” policies and support comprehensive immigration reform, a stance that stems from their belief that migration is a humanitarian issue rather than a politically partisan cause.

Immigrants today are the main force preventing a sharp decline in U.S. Catholic Church membership, which some estimates put at about 70 million.

“Basically the bishops are handing him a megaphone that he can use on issues like DACA, family separations and other issues that affect immigrants,” Reese said.

Catholics, like the general U.S. population, are divided over immigration, notably along ethnic lines. About 77% of Latino Catholics favor allowing immigrants who are living in the U.S. illegally an opportunity to become citizens, compared with 55% of white Catholics, according to the Public Religion Research Institute.

Gomez has said that those who are here illegally must be held accountable by imposing fines — and perhaps community service — and they must educate themselves about the country’s laws and government. Deportation, he believes, is a punishment that doesn’t fit the crime.

As a boy, he regularly traveled across the border, moving between his home in Monterrey and his uncle’s house in San Antonio. He would go fishing with his father at South Padre Island, using his passport and la mica, a border-crossing card needed to make the journey at the time.

His family has lived in Texas since 1805, he said, when the area was still under Spanish rule. His grandparents were married at the cathedral in San Antonio in 1917.

“This is a major milestone not simply because of where Archbishop Gomez comes from, but who he is,” said John Carr, director of the Initiative on Catholic Social Thought and Public Life at Georgetown University. “In a wounded church, he can be a healer. In a divided nation, he is a bridge builder.”

Carr, who served as an advisor to the U.S. bishops on public policy for two decades, said he sees Gomez as “a pastor and teacher, not a culture warrior.”

“He defends the lives of unborn children and the dignity of undocumented immigrants because they are all children of God, not to advance a political or ideological agenda,” he said.

Another Murder-Suicide: NYC Man shoots ex-girlfriend, her new boyfriend, then himself in murder-suicide