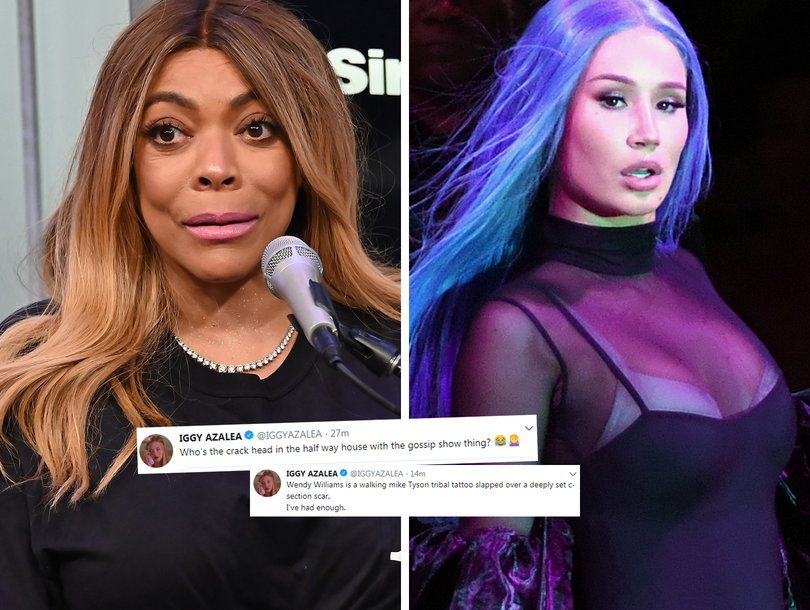 “Who’s the crack head in the half way house with the gossip show thing?” the rapper posted… among other insults. Iggy Azalea and Wendy Williams on have the claws out again. During...
by Raquel Jayson September 18, 2019 306 Views

“Who’s the crack head in the half way house with the gossip show thing?” the rapper posted… among other insults.

Iggy Azalea and Wendy Williams on have the claws out again.

During her latest “The Wendy Williams Show“, the 55-year-old TV host threw shade at the “Fancy” rapper, 29, as she asked the audience “Who’s the Australian girl with the fake body?”

And Azalea was quick to take to Twitter to respond as she posted “Who’s the crack head in the half way house with the gossip show thing?” with a retweet of “Your breath stink from talking sh*t, you want a mint?”

And in a since-deleted tweet, she wrote “You would have thought after crying publicly all summer, walking around in a wig that looks like it hasn’t been brushed in a week, talking to papz clearly high as hell etc etc she would mind hers but her she is… baby!”

FYI: Wendy got her tattoo to cover a tummy tuck scar. “I don’t particularly like that one, but I’d rather have that than the cut,” she previously explained.

Fans lit up Twitter with support for Azalea as one wrote “When she said you had a fake body, I felt the need to zoom in on her boobs and remind her what the real tea is.”

“Bruh has she seen herself. She better start considering a fake body lol,’ a user chimed in. “I don’t see how somebody who had plastic surgery done would be so critical on other people and calling their bodies fake. @IGGYAZALEA you go girl!” added another.

The verbal battle wasn’t the first time these two ladies have come for each other.

Back in November 2018, Williams shared a similar sentiment on her daytime show when she asked “Isn’t she from Australia? When did she develop a “blaccent”? She probably bought that at the same place she bought her booty and her boobs. Oh please, that is a coin well spent.”

But Azalea was just as quick to clap back then too, as she tweeted a GIF of Williams in a Statue Of Liberty costume famously fainting on set.

The since-deleted tweets included “Imagine having to f**k Wendy Williams… I guess I just feel like if you’re pushing 60 without ever having lived an entire year on this planet where we could deem you attractive, you should keep it a whole lot cuter on certain commentary.”