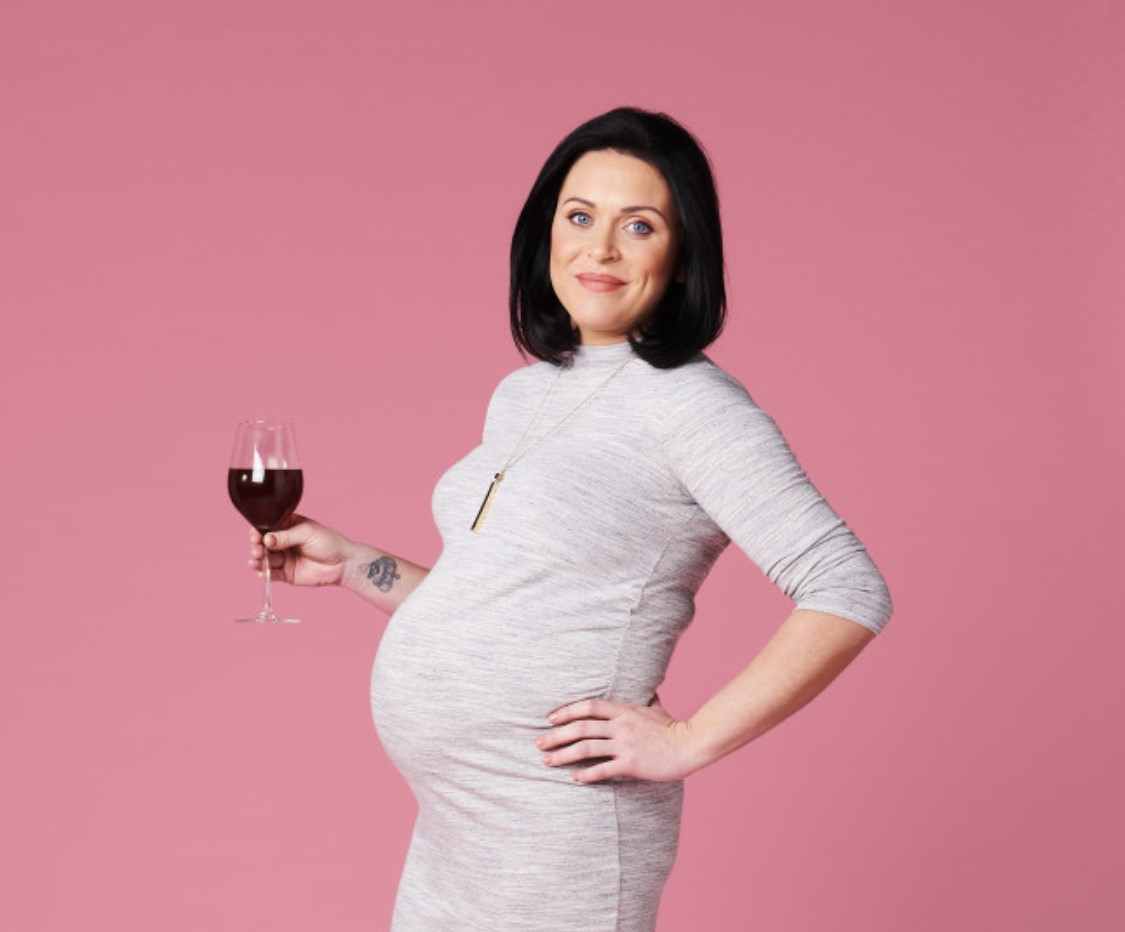 I drunk beer and wine through all FIVE pregnancies… it’s my body, my choice

“SITTING in our local pub with my girlfriends, a waitress comes to take our orders and notices my big baby bump. “‘Orange juice for you?’ she asks pointedly. ‘No...
by Raquel Jayson February 11, 2020 282 Views

“SITTING in our local pub with my girlfriends, a waitress comes to take our orders and notices my big baby bump.

“‘Orange juice for you?’ she asks pointedly. ‘No I’ll have a wine like my friends,’ I reply with a scowl.

Zola is a mom-of-four who is currently seven months pregnant with her fifth child.

She’s drank wine, beer, or Champagne during all her pregnancies, so this isn’t the first time she’s faced horrified looks or comments from strangers.

Older women have shouted at her in public, bar staff have refused to serve her and she even admits she sometimes hides in the bathroom so her 13-year-old daughter can’t lecture her about her habit.

But, despite this, the 33-year-old hairdresser from Scarborough, North Yorkshire, has told Fabulous Digital she’s sick of people attacking her boozing and claims she’s fit, healthy and her kids are just as smart as the next.

“Ella, my eldest, has told me I’m bonkers though.

“If I open a glass of wine at home she lectures me about pregnancy and drinking.

“I have to sneak my tipple to the bathroom in case she spots me.”

I remember going to the pub with my baby bump showing and being refused service when I asked for a second small glass of Prosecco. Zola 33

“In December 2011 I discovered I was pregnant with my third baby.”I remember going to the pub with my baby bump showing and being refused service when I asked for a second small glass of Prosecco.

“I was horrified. I felt judged and convicted of something that wasn’t a crime.

“I knew then snooty judgements were not going to prevent me standing up for my rights.”

A recent report from Bristol University claims women who booze during pregnancy have less brainy children and are at greater risk of having underweight babies, but on hearing this, Zola rolls her eyes.

“I refused to be criticised and shamed by people for enjoying a glass wine during my pregnancy,” she says.

“If I want a glass of wine I will have it and no one can tell me otherwise.”

Drinking Alcohol When Pregnant – What the NHS says…

Experts are still unsure exactly how much – if any – alcohol is completely safe for you to have while you’re pregnant, so the safest approach is not to drink at all while you’re expecting.

Is it safe to drink alcohol when pregnant?

The Chief Medical Officers for the UK recommend that if you’re pregnant or planning to become pregnant, the safest approach is not to drink alcohol at all to keep risks to your baby to a minimum.

Drinking in pregnancy can lead to long-term harm to the baby, with the more you drink, the greater the risk.

How does alcohol affect my unborn baby?

When you drink, alcohol passes from your blood through the placenta and to your baby.

A baby’s liver is one of the last organs to develop and does not mature until the later stages of pregnancy.

Your baby cannot process alcohol as well as you can, and too much exposure to alcohol can seriously affect their development.

Drinking alcohol, especially in the first 3 months of pregnancy, increases the risk of miscarriage, premature birth and your baby having a low birthweight.

Drinking after the first 3 months of your pregnancy could affect your baby after they’re born.

The risks are greater the more you drink. The effects include learning difficulties and behavioural problems.

Drinking heavily throughout pregnancy can cause your baby to develop a serious condition called foetal alcohol syndrome (FAS).

Drinking less heavily, and even drinking heavily on single occasions, may be associated with lesser forms of FAS. The risk is likely to be greater the more you drink.

Chief Medical Officers for the UK and the NHS recommend that if you’re pregnant or planning to become pregnant, the safest approach is not to drink alcohol at all to keep risks to your baby to a minimum.

They state that drinking in pregnancy can lead to long-term harm to the baby, with the more you drink, the greater the risk.

Despite this, figures from a study in 2019 show 41% of women in the UK drank alcohol during their pregnancy.

So are British women too selfish to give up the booze when they are expecting? Or have the ‘rules’ and ever-changing ‘guidelines’ made expectant moms, like Zola, decide it’s ‘their body’ and ‘their choice’?

“I am so sick of the pressure put on pregnant women to be ‘perfect’ and the forever changing ‘rules’,” Zola exclaims.

“It’s got to stop and it’s time people stopped judging.

“I am not afraid to admit I have always enjoyed the odd glass of wine throughout all my five pregnancies.

“All my babies have been fit, healthy and above birth weight.

“When I fell pregnant with my first daughter Ella, now 13, in January 2006 I was 19. I was honest with my midwife and told them I enjoyed a glass of wine with friends or to chill out in the bath.

“She was born in September 2006 after a 12 hour labour and weigh 7 pounds 7 ounces. She was healthy.

“She passed all her developmental phases with flying colours and is now great student,” Zola says proudly.

I am not afraid to admit I have always enjoyed a weekly glass of wine throughout all my five pregnancies. All my babies have been fit, healthy and above birth weight.Zola33

“I’d still have a glass of white or red at home or with friends.

“Ashton was born in September 2008 after 6 hour labour and weighed 9 pound 12. Like Ella he was healthy and strong.”

“I had breast fed Ella for six months and did the same with Ashton, but no, before you ask, I didn’t stop drinking and I didn’t ‘pump and dump’,” Zola is quick to add.

“Wine was my treat, my moment for me to relax, unwind and help my body recovery from the pregnancies.

Zola went on to have Dawson, now eight, and Summer-Rose, now three, they both were happy healthy babies weighing 8 pounds 8 ounces.

“I breast fed them all and still enjoyed a glass of wine or champagne on birthdays, Christmas or special occasions.

My friends all know I drink responsibly. They know my kids are healthy. They know I am a great mum.Zola 33

“I was healthy throughout all my pregnancies – I  swam, walked the dogs and did yoga but, particularly during Summer’s pregnancy, I noticed more people shooting me disapproving looks.

“An older lady once came up to me and berated me for drinking.

“I listened politely and continued to enjoy my drink.

“Summer’s a thriving three year old now, smashing all her developmental ‘milestones’ just like my other children.

Despite criticism from strangers, her daughter and bar staff, Zola says her friends and parents support her decision to drink.

“None of my friends have questioned my decision to enjoy a wine. They know I drink responsibly. They know my kids are healthy. They know I am a great mum,” she says.

“Many of them have enjoyed a glass or two of wine throughout their pregnancies too, so I’m not alone.

“I discovered I was pregnant with my fifth child in August last year.

“When I had my first midwife appointment we went through the usual pregnancy checklists.

“She asked me how many units of alcohol I drink and I told her honestly and openly one or two.

“I have never hidden I enjoy a glass of wine or a beer.

“As a mum of four I haven ever had any problems and this pregnancy is making me glow.

“I’m fit and healthy, the day before I did the pregnancy test I was jogging with my mum.

“I swim weekly and stay fit walking the kids to school.

“I cook our meals from scratch at home but cannot give up soft cheeses which pregnant women aren’t meant to.

“I think that’s naughtier than the glass of wine but no one bats an eyelid when I’m knocking back the brie.

NATIONS WITH MOST BOOZING DURING PREGNANCIES

TOP 5 countries for alcohol consumption at any point during pregnancy are:

“Over Christmas I had champagne, a couple of lagers and my usual red or white wine,” she adds.

“I never get drunk and it helps me relax.

“My pregnancy scans are all normal.

“My family knows I enjoy a tipple and they support me.

“I am separated from my husband and we are great co-parents.

“He has never had an issue with me enjoying a wine.

“As a mum of soon-to-be five I know I am doing the right thing for my body and my baby.

“Throughout history women have drunk during pregnancy.

“My grannies both enjoyed a drink with their babies and we’re all healthy.

Pregnant women are now filled with anxiety every time they leave the house for fear of being judged. It’s time pregnant women pushed back. I refuse to be shamed for my weekly tipple.Zola 33

“Of course, I have read stories about babies being born with Fetal alcohol Spectrum Disorders (FASD).

“I don’t drink to excess and my four other children are proof I am not doing any harm.

“I am not dependent on alcohol. I drink socially and limit it to one or possibly two glasses a week.”

In 2017 a study published by the Lancet Global Health showed four in 10 British women drink during pregnancy.

According to Babycentre UK  while drinking during pregnancy is not encouraged, they say if you do decide to drink while pregnancy, one or two units of alcohol once or twice a week is okay as long as it’s not enough to get drunk.

“I know pregnant women are being put under huge amounts of pressure.

“We’re criticised for everything from our size, to what we eat, how we dress, whether we do or don’t exercise.

“Social media has become a competition to have the tiniest pregnancy belly and the snap back instantly.

“Pregnant women are now filled with anxiety every time they leave the house for fear of being judged.

“It’s time pregnant women pushed back. I refuse to be shamed for my weekly tipple. It’s not illegal and I know I am a wonderful mother. My children are my world and they are all healthy.

“I know many people will read this and accuse me of being irresponsible. The reality is I am not.

“By all means have your option but don’t you dare criticise me.”

No proof of safe limit for booze

Heavy drinking during ­pregnancy can be harmful to an unborn child.

Alcohol in pregnancy is also linked with the risk of miscarriage, premature birth or stillbirth, restricted growth in the womb, and an increased risk of illnesses in infancy and childhood.

Fetal Alcohol Syndrome (FAS) is the most well-known condition.

It can cause heart defects, facial abnormalities and poor growth as well as severe developmental problems.

While Fetal Alcohol Spectrum Disorder (FASD) is milder, it can still mean learning and behaviour difficulties or physical problems.

Of course, that doesn’t mean that every baby will be affected.

The more a mum-to-be drinks, the greater the risk of serious problems.

The snag is where to draw the line.

Many women enjoy an occasional glass when they are expecting and, by and large, their babies don’t come to any harm.

Science can’t say for sure how much is safe.

So, in the absence of a proven safe limit, experts come down on the side of caution and advise women to avoid alcohol entirely during pregnancy.