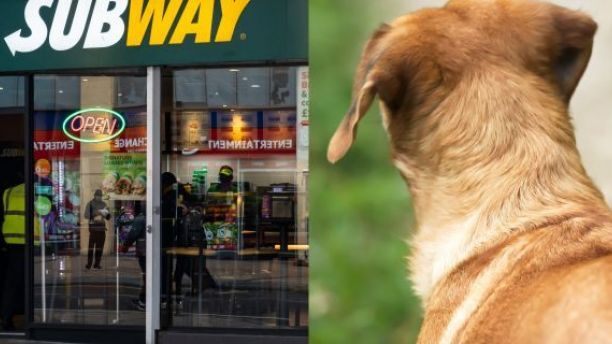 A HUNGRY stray dog dubbed “Sally” has visited Subway every night for a year sitting patiently outside waiting for food, staff have revealed.

He filmed the adorable animal gazing through the glass door at the end of the day after the store had closed.

It patiently waits as he gathers a few pieces of ham and bacon before heading to the back door.

He then hands the meat to the grateful canine who snaffles them up.

Giovanni explained: “This stray dog has been coming to Subway every night for the past year.

“We always feed her. Her name is Subway Sally.”

When he woke up the next morning after uploading the clip to TikTok, he found it had more than 10million views, CBS reports.

I live in a very poor town and more often than not people can’t pay for pet food.”Subway Employee Giovanni Luhman

And another said: “Please make her the mascot of that Subway, take shifts on taking her home and caring for her.”

Giovanni told his followers he can’t take Sally home himself because he has cats.

And he said he hasn’t taken her to a shelter because the closest one – which is 20 miles away – has a high death rate.

But she never wants to go with them and Giovanni suspects she has a regular place to sleep and puppies to care for.

Sadly, he said she’s not the only stray in the area.

The animal lover revealed: “I live in a very poor town and more often than not people can’t pay for pet food.”

He told CBS he’s been inspired to start a local pet food drive “to help low income families in hopes that their pets won’t end up on the streets because they can’t be taken care of”.

Wow! A Lime Green Puppy Has Been Born. One Of Seven In His Liter