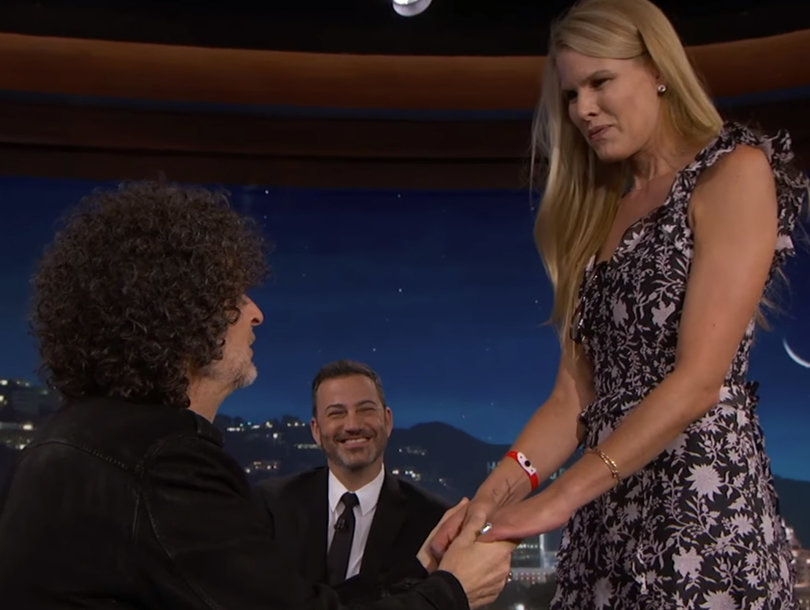 Beth has always refused because she “thinks it’s a jinx” to remarry. Howard Stern asked his wife Beth Ostrosky to remarry him on Wednesday’s “Jimmy Kimmel Live“. During his interview,...
by Raquel Jayson October 10, 2019 284 Views

Beth has always refused because she “thinks it’s a jinx” to remarry.

During his interview, the 65-year-old shock jock confessed to host Jimmy Kimmel that he has repeatedly asked his partner of over 20 years — they got hitched in 2008 — to walk down the aisle again, but Beth has always refused because she “thinks it’s a jinx” to remarry.

And to show how “embarrassed” Beth gets when asked, Howard pulled her on stage and got down on one knee to pop the question.

“Darling, you know you have given me the best years of my life. I love you so much. You do so much for animal rescue and you know how I feel about you. I’m gonna say now in front of my best friends,” Howard said as he pointed to the studio audience adding, “My sweet love, will you marry me again?”

But to his surprise, this time, Beth said, “Yes.” Howard appeared excited as he jumped up and gave Beth a kiss before she sheepishly went back to her seat.

The couple first married at Le Cirque restaurant in New York City with the ceremony officiated by “Riverdale” actor Mark Consuelos. Howard was previously married to Alison Berns from 1978 to 2001. The is the first — and apparently second — marriage for Beth.

Congratulations are in order again for Howard and Beth!

DJ Khaled Plagued by Panic Attacks After Family’s Home Invasion: ‘It Messed Me Up’