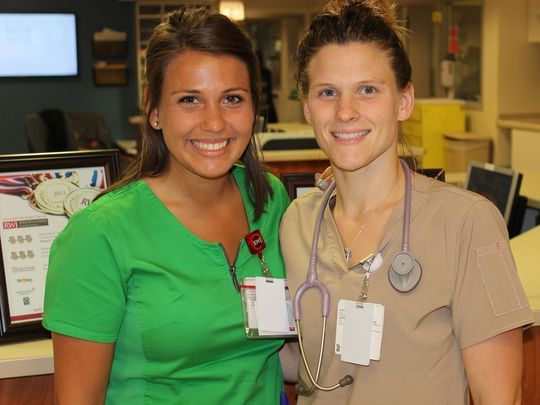 How a nurse saved a life on a plane

A nurse on the job for only nine months sprang into action aboard a JetBlue flight Monday when there was a medical emergency. Courtney Donlon was asleep on her flight...
by Katricia Brown May 24, 2017 455 Views 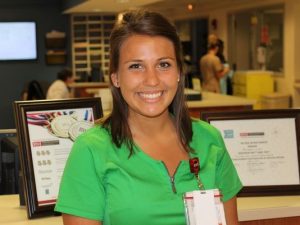 A nurse on the job for only nine months sprang into action aboard a JetBlue flight Monday when there was a medical emergency.

Courtney Donlon was asleep on her flight from Fort Lauderdale to Newark when she was awakened by an announcement from a crew member asking whether any medical professionals were on the flight.

Donlon, 22, stood up and began putting her newly acquired registered nurse’s license to good use. A nurse in the respiratory care unit at Robert Wood Johnson University Hospital in New Brunswick, N.J., since September, Donlon helped save the life of a fellow passenger who went into cardiac arrest on the flight.

“I stood up and went over to the flight attendant. As soon as I identified myself as a nurse, they let me start assessing the woman in distress,” she said. “I introduced myself — told her I was Courtney and I worked at Robert Wood Johnson and what kind of floor I worked on so she would start to trust me a little bit. I told her she was in good hands. From there, I assessed her pain.”

Her nurse’s training kicked in immediately, she said.

“Also, I was trying to think a step ahead — if she loses consciousness or a pulse and I have to give CPR,” Donlon said. “I was thinking how do I make what I do have here work.”

Donlon knew her resources aboard the plane were limited. She had only a stethoscope, blood pressure cuff, oxygen, defibrillator and aspirin to begin treating the 57-year-old woman.

“She had shooting pain that went up her left arm up her neck and down her shoulder blade,” said Donlon, who grabbed the defibrillator. “That’s really characteristic of a myocardial infarction — a heart attack — in women.

“For a heart attack, there is a common acronym called MONA and it stands for Morphine, Oxygen, Nitroglycerine and Aspirin. What they had available to me was a small tank of oxygen with a mask and I was pretty sure I could get aspirin from someone on the plane.”

Developing a strong bond with the woman, Donlon asked more about her medical history, discovering this was the first time she had experienced this type of pain. The woman, like Donlon, had fallen asleep on the 6:30 a.m. flight but woke up in pain and short of breath.

“She didn’t have any prior heart conditions, but it turns out the pain actually had started the day before, but she thought it was discomfort like maybe she slept wrong on her neck or maybe she pulled it in the garden or from carrying a heavy purse,” she said. 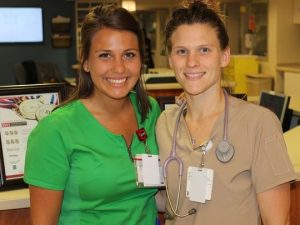 Courtney Donlon, left, with her sister Nicolle Black, comes from a family of nurses. She, her sister and mother work at Robert Wood Johnson University Hospital. Donlon helped save a woman who was having a heart attack on a flight Monday, May 22, 2017. (Photo: Courtesy of Peter Haigney, Robert Wood Johnson University Hospital via (East Brunswick, N.J.) Home News Tribune)

“When I needed aspirin, the flight attendants checked with the captain but quickly approved asking the passengers for it,” Donlon said. As soon as they made the announcement, people were so helpful, jumping up and looking in their makeup bags and pill pouches to get the aspirin she needed. And she chewed it as it would make it act faster.”

Donlon said the pain was coming and going for her patient and she felt it crucial to keep her calm.

Donlon convinced the pilot that the plane needed to make an emergency landing so the woman could be brought to a hospital. She woke up one of her friends, also a nurse, to keep monitoring the woman while she spoke with the captain.

After hearing from Donlon that it was “a dire situation,” he obliged, landing the plane within 20 minutes in Charleston, S.C., where the woman was given assistance at a nearby medical facility.

“I got off the plane and onto the tarmac with her. She was nervous,” Donlon said. “I gave a report to the paramedics. She asked me to get off with her and hold her hand until she was with the paramedics. She was travelling alone. And we really created a trusting relationship — a bond. She felt safe, I hope, that she was under my care.”

Though it was not the relaxing flight home she had anticipated after her weeklong vacation in Las Vegas, Donlon, who was flying with two friends, Valentina Centeno and Shannon Scariff, was happy to be of service.

“We took the red eye the night before at 10 p.m. in Vegas, landing at 6 a.m. in Florida, and at 6:30 a.m., we were on the next flight,” she said. “This was not what I expected, but I thank God I was in the right place at the right time and there was someone that could get her help. And because of my background here at Robert Wood Johnson, I felt very confident and comfortable to step up and take control of the situation even though I’m a relatively new nurse.”

Donlon added that her friends are fellow nurses who were supportive during the event.

A day later, Donlon was back at work in the busy respiratory care unit at Robert Wood Johnson University Hospital. A 2016 graduate of the nursing program at Caldwell University, Donlon’s nursing instincts come naturally — both her mother and sister are nurses and a younger sister is studying to be a nurse.

“I think even with the adrenaline going through me, I have seen this and heard about this my whole life,” Donlon said. “I have seen my mom take control before and my sister take charge in the field. If you don’t step up, it’s kind of a bystander thing and in my family, they have always been the ones to step up and try to give care, so I felt it was natural for me to do so. … I can’t lie — I was nervous at first being on a plane with limited supplies, but once I realized I was the most qualified person on the plane and someone had to be the confident one, then I could take to the role pretty easily.”

Though Donlon does not know her patient’s status, she is hoping to be in contact with her.

“Maybe she will reach out to me,” she said. “I’m going to give it some time before I reach out because her condition was very serious and I want to make sure she can rest comfortably.”