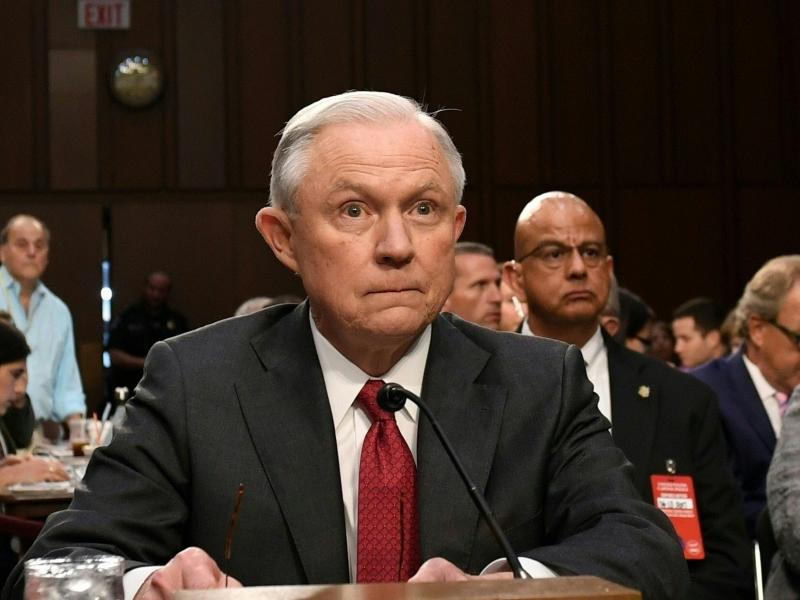 Houston restaurant faces boycott after saying it was an ‘honor’ to serve Jeff Sessions!

Jeff Sessions’ recent outing to a Houston restaurant has caused a furore. Photograph: Mike Blake/Reuters It seems the moment a member of the Trump administration walks into a restaurant,...
by Joy Smith August 13, 2018 395 Views

It seems the moment a member of the Trump administration walks into a restaurant, they’ve already put it in a potentially business-threatening bind. In June, the Red Hen restaurant in Virginia refused to serve the White House press secretary, Sarah Sanders, and was besieged with protests, boycotts and threats, forcing it to close for weeks. Now a restaurant in Texas has proudly served the attorney general, Jeff Sessions, and faced much the same fate.

Sessions, who has recently been defending anti-LGBT hate groups and was one of the most steadfast supporters of the family separation policy, went for dinner at a Houston Tex-Mex restaurant, El Tiempo Cantina over the weekend. After dinner, he posed for a photo with co-owner Dominic Laurenzo and the restaurant later posted the image on their Facebook page with the caption: “We had the honor to server [sic] Mr. Jeff Sessions, Attorney General of the United States. Thank you for allowing us to serve you.”

The restaurant was immediately inundated with protest from anti-Trump Houstonians, who posted their outrage alongside the hashtag #BoycottElTiempo.

The restaurant’s Yelp page also received a number of one-star reviews referencing the Sessions photo. One poster wrote in a one-star review how the incident is likely to have affected many of the people who work at the restaurant: “Their staff, mostly Hispanic, is SUPER sweet and hard working. What a slap in the face for them …”

Dominic Laurenzo had previously expressed pro-Trump sympathies. In 2016, he allowed a pro-Trump music video to be filmed at one of his restaurants, telling the Houston Chronicle that he was planning to vote for Trump in the general election.

This time, the restaurant attempted to do damage control and distance themselves from the administration. Roland Laurenzo, Dominic’s father with whom he co-owns the restaurant, wrote a Facebook post saying he did not support Sessions’ stance on immigration.

“El Tiempo does not in anyway support the practice of separating children from parents or any other practices of the government relative to immigration,” he wrote. “The posting of a photograph of the Attorney General at one of our restaurants does not represent us supporting his positions…The man came to dinner and he was served without us even thinking about the political situations. We were preoccupied with the secret service and catering to their wants and needs.”

The apology did little to stem the anger, and hours later the restaurant closed down all of its social media accounts. The statement did serve to widen the pool of outraged patrons though, with Sessions supporters also turning on the establishment. One Yelp poster wrote, in a one-star review, “This restaurant let Marxist activists threaten and bully them into apologizing for serving the attorney general. Shame on them! BOYCOT [sic] THIS PLACE!”

After two days, the restaurant’s monthly-average rating had fallen, from four stars in July to two and a half stars in August.

“We have gotten so many complaints and comments. And threats, death threats. This has been extremely shocking to our family,” said Roland Lourenzo in an interview with local station KHOU11.

The saga mirrors the decision by Stephanie Wilkinson, the owner of the Red Hen restaurant in Virginia, to ask Sarah Sanders to leave her restaurant. Wilkinson said after Sanders’ visit that many of her staff did not want to serve someone defending the child separation policy and Trump’s attempted ban of transgender people in the military. Afterwards the restaurant was besieged by pro-Trump protesters who hurled eggs and excrement at the building. Trump supporters continue to post one-star reviews of the restaurant on Yelp, although the site is now moderating reviews for political affiliation.

It was once the case that visits from a high-ranking politician would boost a restaurant’s fortunes. When then president Obama visited La Hacienda, a Mexican restaurant in Nashville, in 2014, it immediately led to a boost in customers and a new dish was added to the menu honouring the occasion. Now it seems a restaurant’s best hope if a White House official wants to eat there is to hope no one notices, at least if they want to avoid protesters.

Domestic dispute leads to death of boyfriend in chase!