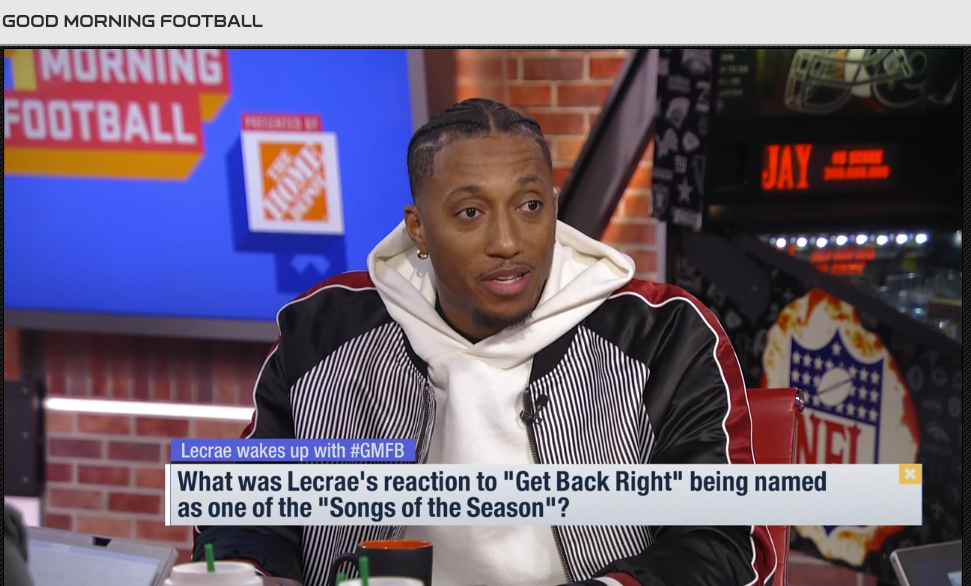 Click here to watch Lecrae’s announcement on the NFL Network Today, the NFL announced two-time Grammy award-winning emcee LECRAE as the third artist to be featured in its “...
by Raquel Jayson January 9, 2020 396 Views

Today, the NFL announced two-time Grammy award-winning emcee LECRAE as the third artist to be featured in its “ Songs of the Season ” series. Lecrae’s “ Get Back Right,” which is off his album, Let the Trap Say Amen (a collaborative album with award-winning producer, Zaytoven ) , will be heard throughout the NFL playoffs across several telecasts. See below for song and sample broadcast clips:

“Throughout my entire career, I have always hoped that my music would inspire and uplift,” Lecrae said. “It is an amazing honor to partner with the NFL and its Inspire Change initiative to combine our platforms to change the communities we call home.”

Songs of the Season is a multi-tier, season-long initiative that will highlight stars and emerging artists of all genres. The series showcases musicians that deliver a song to be integrated in all NFL promotions during the season. Songs have debuted during in-game broadcasts and have been released to all digital streaming platforms (DSPs) worldwide.

A best-selling author, entrepreneur, speaker, thought leader, philanthropist, and Co-owner/President of Reach Records, Lecrae has been recognized for his social justice/restorative work in the community. He has partnered on several major projects to develop Atlanta’s English Avenue , an area known for its rampant drug trafficking and violent crime statistics. He also serves as a member of the Board of Advisory for Peace Academy , the first school in the English Avenue area to be opened in more than 20 years. In addition to the restoration of community through academic ventures and real estate acquisitions, Lecrae is promoting healthy families continuing two media campaigns – “Man Up” and “This Is Fatherhood” – encouraging male urban youth to remain responsible and active in their children(s)’ lives.

“The ‘ Songs of the Season ’ initiative is just one of the ways we shine a light on the great work NFL players and clubs continue to do as it relates to social justice,” said ANNA ISAACSON , NFL Senior Vice President of Social Responsibility. “An award-winning musician and adamant social justice supporter such as Lecrae is a perfect pairing for ‘Songs of the Season’ and will help amplify the great work being done in our communities.”
All revenue generated from Songs of the Season will support Inspire Change grant recipients as part of the NFL’s social justice initiative with focus on the following priority areas: education and economic advancement, police and community relations, and criminal justice reform.

Lecrae is currently in the studio recording his 9 th studio album, Restoration , and writing “I Am Restored,” a follow-up to his best-selling book, Unashamed .

Authenticity has been the hallmark of Lecrae’s career. With seven studio albums and multiple mixtapes, Lecrae is now nearing the 2 million mark in sales. He won a Dove Award for Album of the Year in 2019 for his collaboration with Atlanta producer Zaytoven, Let the Trap Say Amen and has been the recipient of multiple honors including: Billboard Music Award, multiple BET Hip-Hop nominations, Soul Train Music Award, and Dove Awards and even an Honorary Doctor of Music to go along with his two Grammy wins.
You can follow Lecrae on all social media platforms @Lecrae .

Is The Brutal World Of Bare-Knuckle Boxing Too Violent To Come To America: Bones Breaking And Teeth Flying Into Audience

School Shooting: A Teacher Is Dead, An 11 Year Old Shooter Is Dead And 6 Injured