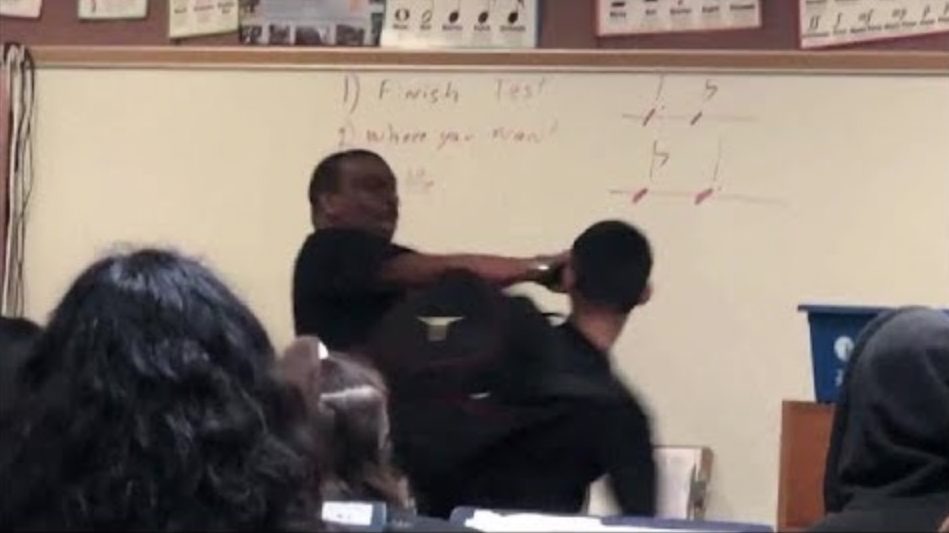 64-year-old Marston Riley is Los Angeles high school music teacher who was caught on camera punching a teenage student earlier this month. On Friday, the Los Angeles County District Attorney’s Office announced in a news release that Riley was charged with one misdemeanor count of corporal injury to a child.

The charge comes after Riley was arrested on Nov. 2 at Maywood Academy High School in California after repeatedly punching a 14-year-old boy in class, People reports. In the cellphone video, captured by another student and shared by local news outlets, Riley and the teenage boy, who has not been identified, can be seen arguing in the front of a classroom.

Students told KTLA that Riley allegedly asked the boy to leave the classroom because he was not wearing a proper uniform. The student can be heard responding to Riley by repeatedly saying a racial slur at the black teacher. The brawl escalated further after the student allegedly threw a basketball at Riley. After standing quietly at first, Riley is later seen striking the boy, who was seen on the ground wrapping his arms around Riley’s leg. The altercation ended when a woman in a yellow safety vest broke up the fight.

Authorities confirmed the student was treated for “moderate injuries” at a local hospital before he was released while Riley was arrested on suspicion of child abuse, according to the Los Angeles Sheriff’s Department inmate records. He was kept overnight and released on $50,000 bail, People reports. He is scheduled to be arraigned on Jan. 4.

“We are extremely disturbed by the reports of the events that occurred at Maywood Academy High School,” the Los Angeles Unified School District said in a statement. “We take this matter very seriously and do not condone violence or intolerance of any kind. Los Angeles Unified is cooperating with law enforcement in investigating this incident.”

“The incident we saw does not reflect the values of Maywood Academy High School and the wonderful teachers and students who make up the Maywood community,” he said. “We will continue our work to make each school a safe and welcoming learning environment for students and to provide teachers and staff with the support they deserve.”

Following his arrest, a former coworker of Rileys, Cecilia Diaz Jimenez created a GoFundMe page for the teacher, claiming this isn’t the first time he’s been attacked by a student.