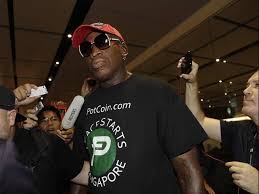 Former NBA star Dennis Rodman said he hopes the agreement signed Tuesday by his dictator pal Kim Jong Un and President Trump is not a “gimmick” or publicity stunt. Moments after...
by Katricia Brown June 12, 2018 877 Views

Former NBA star Dennis Rodman said he hopes the agreement signed Tuesday by his dictator pal Kim Jong Un and President Trump is not a “gimmick” or publicity stunt.

Moments after Trump and the North Korean leader signed documents outlining their framework for future peace talks, the basketball great — who traveled to Singapore for the historic summit — called Kim “a great guy.” 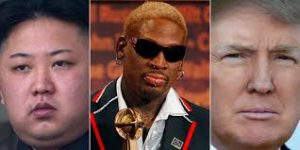 “I just hope that this is not a gimmick. I hope this is very serious,” Rodman told The Post at the Regent Singapore hotel.

“And I hope this is going to bridge some gaps between the countries and I think that they can do a good job. And I think that Trump will realize that Kim Jong Un is a great guy, inside, and put politics aside. I think they’ll begin a great friendship.”

He openly wept as he discussed his tortured relationship with North Korea and its brutal dictator. The heavily pierced and tattooed Rodman, 57, explained that the humid, 90-degree weather got the best of him.

“It was hot,” the hoops legend laughed.

Rodman went on to say that he took so much criticism over a controversial 2014 trip to the Hermit Kingdom that he gets weepy even thinking about it. Rodman at the time sang “Happy Birthday” to Kim and seemed unaware of that nation’s awful human rights record. He had also visited North Korea twice in 2013.

“No, it was just, it’s a tough subject for me to always talk about because at the time I felt like I was so, I was backed in a corner at that particular time and no one helped me to try to say what I was trying to do in North Korea,” Rodman said.

“And some of the things I said when I was under the influence back then that took it in the wrong context. And I think that people see now that I do care what’s really going on and that’s why I’m over here.”

On this trip to Singapore, Rodman has stayed committed to his sobriety — sipping only ginger ale — though he was spotted enjoying cigars poolside at the Regent Singapore.

During the all-important summit, the basketball star sidelined himself at the hotel, only voyaging downtown Tuesday morning for his television hit with Cuomo. “I don’t want to be involved in the politics of this agreement,” Rodman said. “That’s between two governments: the Korean government and the American government.”

Instead, Rodman says he’ll continue to play the role he’s played for the last five years, which is trying to “keep peace with sports.” “I will go back to North Korea, I’m not worried about that,” he told The Post.

He said he expects the citizens of the Hermit Kingdom will see him as a “trustworthy individual” when he returns. “And I’ve said to people all along, those people have never showed any animosity, any aggression, any antagonizing ways that have proved me wrong,” he added. “And I’ll always be kind to those people because they’ve been kind to me.”