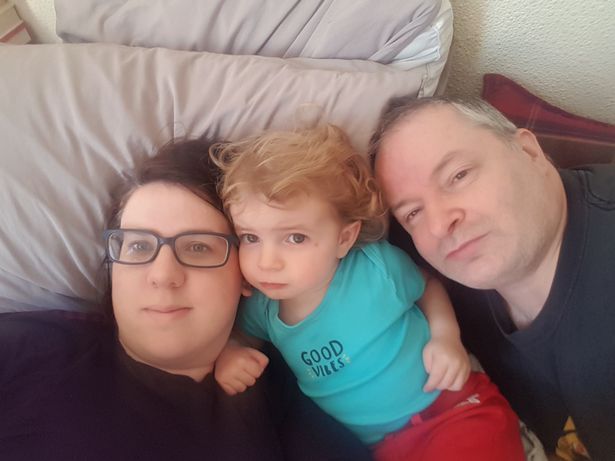 Her Boyfriend Went For A Jog And Didn’t Return: She Found Him Dying In The Street

A GRIEF-STRICKEN mom discovered her partner dying in the street after he failed to return home from a jog. Laura Rudd, 34, launched a frantic hunt for Nigel Glanville,...
by Zach Freeman February 18, 2020 230 Views

A GRIEF-STRICKEN mom discovered her partner dying in the street after he failed to return home from a jog.

Laura Rudd, 34, launched a frantic hunt for Nigel Glanville, 50, heading out to look for him with their two-year-old son Noah.

But Nigel had collapsed with a heart attack and died near their home in Grimsby, North East Lincolnshire on February 8.

Heartbroken Laura has now launched an appeal to stop the law treating unmarried partners like “second-class citizens” when their loved one dies.

Laura, 34, told Manchester Evening News: “I found the ambulance when I went out to look for him with our little boy, Noah, and from there, our world came crashing down.

“I lost the love of my life and our little boy lost his daddy at an age when he is far too young to grasp what that means.

“He just thinks his daddy is hiding and keeps asking when he is going to come home.”

On Valentine’s Day, Laura had to register Nigel’s death and organise his funeral.

She also discovered that even though she and Nigel were together for nine years, the law does not recognise them as a couple.

Laura had to register him as a single man and could not be his next of kin, registering as “the person organising the funeral”.

Laura, who worked as a teacher in Franklin College and the Grimsby Institute, said: “It was a truly low point in the worst week of my life.

He just thinks his daddy is hiding and keeps asking when he is going to come home.

“According to the law, I don’t count. I even had to register him as ‘single’.

“It was a spit in the face for nearly a decade spent together, simply because in the eyes of the law Noah and I aren’t even recognised.”

Laura blasted the “soul destroying” discrimination against unmarried parents when a partner dies.

If the couple were married or in a civil partnership, she would have be entitled to financial support to help cover the cost of his funeral and raise Noah.

Six months ago, the couple bought a house together in Wilberfoss, East Yorkshire and were planning on getting married.

Laura said: “Times have changed and people are not getting married like they used to. Many people who are together are choosing to delay getting married until they are financially stable or choosing not to do it at all.

“There are millions of people across the country who have the same relationship that Nigel and I had, and I just hope that they never have to feel the unnecessary pain that I have been through.

The couple had a life insurance policy but Laura has been unable to access any other financial support.

She says the law treats many couples struck by tragedy as ‘second-class citizens’.

Laura said: “Words cannot describe just how angry I am about it all.”

Laura has launched a petition to put try and pressure on the government to change the law.

Laura’s Equality in Grief appeal intends to address two issues: being able to register someone as part of a cohabiting couple when registering a death and giving cohabiting couples with children the same rights and access to financial support as married couples, such as the bereavement payment.

Laura said: “It won’t bring Nigel back to us, but if it means no one else has to go through this then it will be worth the effort.”