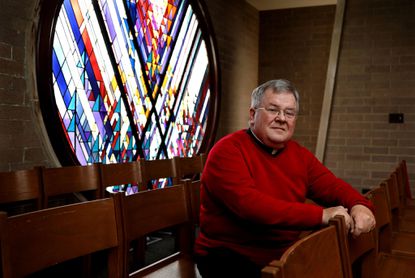 On the Sunday morning after the deadly riot at the United States Capitol, Father William Corcoran put on his black suit and clerical collar and stepped into St. Elizabeth Seton church in the Chicago suburb of Orland Hills to celebrate the 7:30 a.m. Mass.

When it was time for the homily, he stood in front of the “celebrant’s chair” on the altar and removed his mask so that he could be clearly heard. He looked out at the 140 or so masked parishioners who sat in the sanctuary, which was still ornamented for Christmas.

He had a feeling this might not go well.

At the 5 p.m. Mass the day before, nine people had walked out as he delivered the remarks he prepared to say again now. He spoke without notes both times but figures he came close to the version eventually published in the church bulletin, which began like this:

“On this Feast of the Baptism of the Lord, we drink in the last goodness and glories of the Christmas season, and begin ordinary time on Monday.”

So far, so good. Then came the next sentence.

“Goodness and glory,” he continued, “are not two words that we would use describing our past week when we saw an angry and violent mob seize our United States Capitol and interrupt Congress in its duty of certifying the State Elector votes for President and Vice-President. Such an action has left many of us angry, and hurt. Since then we have entered a typical moment of finger pointing, blame, and holding people responsible for what happened. Such finger pointing is not new. In the very story of creation Adam points his finger at Eve for tempting him with the apple, and Eve points to the snake as the cause for all the trouble. Finger pointing often leads to avoidance of responsibility.”

Those words alone would have shaken some parishioners. The most remarkable part, however, was still to come.

“I too want to engage in finger pointing,” said Father Bill, as he’s known in the parish, “and point to myself, and accept personal responsibility in part for what happened in the Capitol this past Wednesday.”

Corcoran went on to name the many times he failed to speak out about Donald Trump’s ugly behavior. Like when the president talked about grabbing women. When he mocked a disabled reporter. When he dissed John McCain.

“As President Trump has lied about so many things,” he told the congregation, “I have never spoken out, and fear we are teaching the young that truth and facts do not matter.”

Each time he was startled. Saddened. “Awful,” is how he described it later.

And each time he knew he was doing what he had to do.

Corcoran’s struggle with speaking out reflects the struggle many Americans have faced during Donald Trump’s tenure. If speaking out against the president hurts people you care for, do you do it? Do you do it at the risk of being misunderstood or vilified? If you do it, how do you do it, and when?

Corcoran is approaching 65 and he’s been a priest for nearly 40 years. He grew up as the older brother to four sisters in a South Side German-Irish neighborhood where people identified by Catholic parish. His was Little Flower. He has spent eight years as pastor at St. Elizabeth Seton, a large congregation he describes as middle to upper-middle class.

Corcoran sees one of his jobs as “keeping people together.” Until recently, he worried that denouncing Trump’s behavior would divide the congregation unnecessarily. The Capitol insurrection changed his mind.

“To remain silent now, in the face of this violence,” he says, “was to give tacit permission that this is how we settle some things.”

After he spoke out, Corcoran received calls and emails from several upset parishioners. Some said they come to church to find peace and instead they’d found confrontation. Some had questions: Why hadn’t he condemned the looting that sprang from last summer’s racial justice protests? Why doesn’t he speak out more against abortion?

“One that struck me very hard was someone who didn’t feel welcome or that, because they support Trump, they don’t belong here anymore,” he says.

In the past week, as he talked to distressed parishioners, he has questioned himself: Could he have called out the violence without naming Trump? Should he have waited a couple of weeks when feelings weren’t so raw? He keeps coming back to one word: no.

Still, he’s “sorrowful” over the hurt felt by those who walked out.

“The people who walked out are my parishioners,” he says. “I’m obligated to care for them as well.”

But maybe, he thinks, caring for them means speaking the truth.

“When you lance a boil, it’s messy, it’s painful, it’s smelly,” he says. “But it lets the poison out. We need to let some poison out of the system for the process of healing.”

Corcoran has taken consolation from the many parishioners who are relieved that he finally spoke up. Some have thanked him for being courageous, a word he waves away.

“I didn’t think it was courageous,” he said. “I thought it was necessary.”