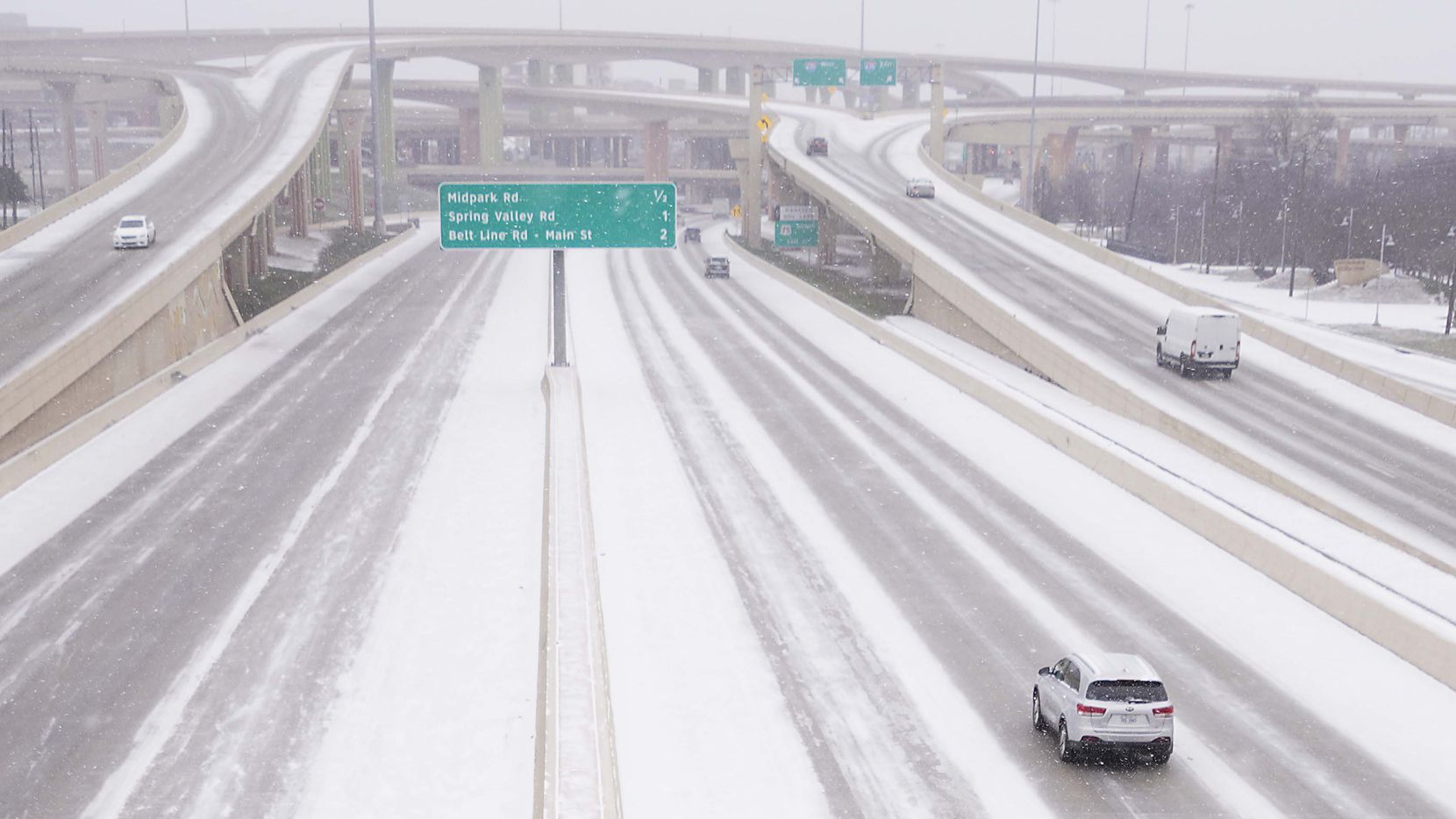 Nearly 170 million people are under winter weather advisories Monday, with icy roads, power outages, and dangerously low temperatures threatening to snarl traffic and paralyze cities from coast to coast.In the nation’s heartland, at least 11 people have died in weather-related vehicle accidents since cold temperatures took hold of the country. Nine died in three separate incidents in Texas Thursday, one person was killed in Kentucky, and another died in a wreck in Oklahoma Sunday.

At least 9 dead in crashes across Dallas-Fort Worth area due to winter stormsAlmost 3 million customers were without power in the US as of early Monday morning, with the majority of outages reported in Texas, where rolling outages started overnight amid high demand.The severe winter weather has sparked emergency declarations in at least seven states, including Alabama, Oregon, Oklahoma, Kansas, Kentucky, Mississippi and Texas — which has borne the brunt of the cold weather.Officials in Harris County, Texas, warned residents during a press conference Sunday night to stay indoors.”The window to prepare for this historic storm has closed as the time to hunker down is here,” Harris County Judge Lina Hidalgo said, adding that the dual threat of ice on the ground and extreme cold weather is going to pose “serious challenges.” 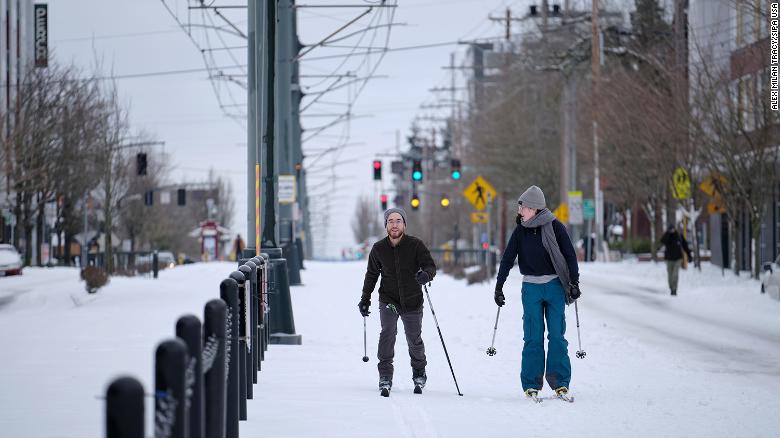 The Houston area has been hit especially hard. Both airports are closed and city police responded to more than 130 traffic accidents Sunday night, Police Chief Art Acevedo said in a tweet.A 10-car pileup on Interstate 45, south of downtown, was just one of many incidents on icy roads.”Please avoid traveling until this severe weather event subsides,” Acevedo said. 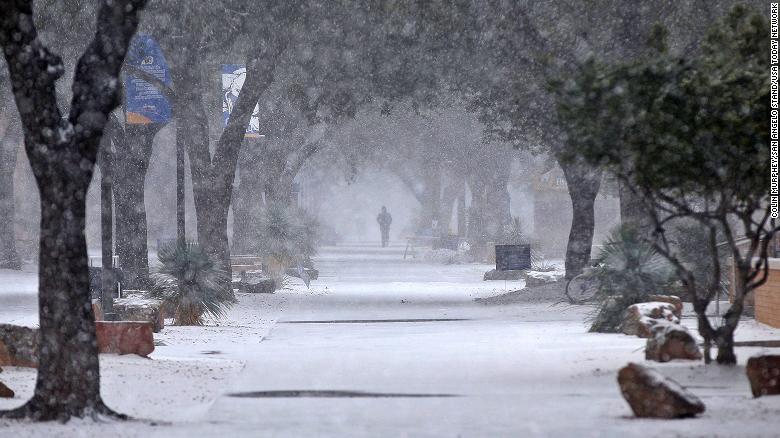 A pedestrian walks through the snow on the Angelo State University campus in Texas Sunday.Houston Mayor Sylvester Turner, who declared a state of emergency earlier in the day, echoed the chief’s orders”Please stay off the roads tonight and through tomorrow. This is serious! The roads are dangerous!”On top of the danger icy roads pose, the mayor also cautioned residents that the weather could cause rolling blackouts.Icy roads in Texas have already proved deadly.

A pile-up in Fort Worth on Thursday, involving more than 130 cars, killed nine people and injured dozens more, with at least 65 people seeking treatment at local hospitals following the crash.A nurse driving home from work in the Houston area was rescued by other motorists when her car hit a patch of ice on Friday, CNN affiliate KTRK reported.Zoe Schmidt of Cypress said her car spun around, ran off the roadway, flipped several times and landed in the middle of a feeder road. Jason Muniz said he called 911, then held Schmidt’s hand as two other men used a saw to cut her out of the car.”The last thing I remember, coherently, is them pulling me through a broken glass window,” she said.The men wrapped her in blankets and kept her warm until an ambulance arrived. She spent the night in a hospital and was released the next day with a dislocated shoulder and a black eye, KTRK said. She’s reached Muniz through social media to say thanks and hopes to “pay it forward one day.”

Early Monday morning, more than 2 million customers were without power in the state, according to PowerOutage.US. The Electric Reliability Council of Texas (ERCOT) started rolling outages early Monday, a tweet from ERCOT said.”This is typically done through rotating outages, which are controlled, temporary interruptions of electric service. This type of demand reduction is only used as a last resort to preserve the reliability of the electric system as a whole,” the ERCOT said.

They had previously asked consumers and businesses to reduce their electricity use as much as possible through Tuesday.”We are experiencing record-breaking electric demand due to the extreme cold temperatures that have gripped Texas,” said ERCOT President and CEO Bill Magness.”At the same time, we are dealing with higher-than-normal generation outages due to frozen wind turbines and limited natural gas supplies available to generating units. We are asking Texans to take some simple, safe steps to lower their energy use during this time.”Houston and surrounding areas are under their first ever wind chill warning. Every county in Texas, Oklahoma and Arkansas is currently under a winter storm warning.

Cold snap from coast to coast

Below freezing temperatures are forecast to affect more than 245 million people in the lower 48 states over the next seven days, with more than 50 million Americans expected to experience temperatures below zero.The cold air is so widespread that you could travel nearly 2,000 miles from the Rio Grande on the Mexican border to the St. Lawrence River on the Canadian border entirely in winter storm warnings or watches.

Winter storms stretch from coast to coast, impacting 100 million peopleThere is the potential for more than 240 cold temperature records to be broken by Tuesday evening, and some records have already been shattered.The heaviest snow in the East is expected to fall from the Mississippi Valley, through the Ohio Valley and Great Lakes. A total of 6-12 inches is expected by Tuesday evening from Arkansas to Upstate New York.Oklahoma City has gone a record five days without climbing over 20 degrees Fahrenheit — they are not expected to top that temperature until Thursday, for a stretch of nine days.”This cold snap is forecast to result in record low temperatures that are comparable to the historical cold snaps of Feb 1899 & 1905,” according to the National Oceanic and Atmospheric Administration.

Two die in separate Colorado avalanches on Valentine’s DayDangerous wind chills have been recorded in eastern Colorado and western Kansas, according to the National Weather Service in Pueblo, Colorado. Reports of wind chills ranging from -42 degrees near Yuma, Colorado to -25 degrees near Norton, Kansas occurred late Sunday evening.Such low temperatures on exposed skin will allow frostbite to set within 5-10 minutes. The cold will stay this far south for the next few days where air temperature will be 20-50 degrees below average for this area and including the whole central US through Wednesday.Along with the unusual, widespread cold comes snow events that could also break records.Seattle has already reported more than 11 inches of snow over the weekend, the most since January 1972, almost 50 years ago. Over 50 inches of snow has fallen in parts of Wyoming over the last few days.Cities in the south, including Dallas and Oklahoma City, have the potential for their biggest snowfall in a decade, and between two snowstorms this week, have their snowiest weeks on record.