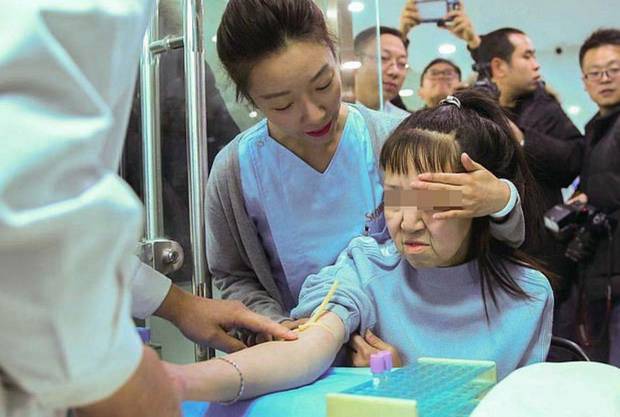 Girl, 15, with rare condition that left her looking older than she was gets a ‘new face’

INSECURE and ashamed, 15-year-old Xiao Feng spent most of her childhood trying to hide her face. She looked more like a 60-year-old grandmother than the sprightly teenager she is,...
by Raquel Jayson January 21, 2020 265 Views

INSECURE and ashamed, 15-year-old Xiao Feng spent most of her childhood trying to hide her face.

She looked more like a 60-year-old grandmother than the sprightly teenager she is, due to a rare condition that caused her to rapidly age.

The disorder was slowly ruining her life – as she was forced to quit school after being constantly taunted by bullies.

However, Xiao’s life finally took a turn for the better earlier this year – when top plastic surgeons from Sunline Plastic Surgery Hospital in Shenyang, in north-eastern China, gave the youngster the face she had always dreamed of.

She was able to afford the staggering £56,000 operation with the help of strangers through crowd-funding.

And she stunned a crowd onstage at her home when she finally unveiled her new look on 20 January.

Xiao said: “Thank you to everyone who helped me. Thank you, Mr Guo, and all the hospital staff for giving me a new future.

“If angels really do exist, they are the nurses at Sunline hospital; if there really are Buddhas, they would look like Director Shi and the experts who have gifted me a new life.”

Xiao, from Liaoning’s Heishan County, was diagnosed with a genetic disorder known as Hutchinson-Gilford progeria syndrome as a child.

The condition, which was inherited from her mother, manifests in symptoms resembling early ageing – and there is currently no known cure.

The experts have gifted me a new lifeXiao Feng

Despite her otherwise lofty ambitions, stigma brought on by Xiao’s condition forced her to quit school.

She described herself as looking like a 60-year-old “grandmother”, and penned an emotional letter to Chinese philanthropist Guo Mingyi, 61, asking for help.

After several weeks of negotiations and fundraising campaigns, Sunline Plastic Surgery Hospital announced it would be performing Xiao’s operations and waiving 70 percent of her £56,000 bill.

The remaining 30 percent was provided by Mr Guo’s NGO, which held a successful online fundraising campaign to make the operation possible.

After staying in the hospital for a week, Xiao underwent a three-part cosmetic operation which lasted eight hours from 8.30am local time on December 29.

A team of medics removed her wrinkles before reconstructing her nose and lips, the privately run facility reported.

Hospital director Shi Lingzhi said about the series of procedures beforehand: “We’ve done many regular wrinkle treatment surgeries, and most of the steps she will go through are the same.

“But the major difference is in her skin, which is very loose and lacks elasticity.

“We will need to transplant skin from other parts of her body to her face, such as from the outside of her thigh.”

Three weeks after her surgery, Xiao and her completely changed face were revealed on stage together with her tearful parents.

The teenager, who revealed she was “nervous” about the operation because she was worried it would hurt, is now unrecognisable compared to photos of her former self.

Xiao’s mother, who also has the condition, said of her daughter’s disorder: “This sort of psychological stress is impossible for ordinary people to understand.

I also dreamt of being pretty one dayXiao Feng’s Mother

“I also dreamt of being pretty one day, but I couldn’t make it come true.

“Now that my daughter has been given this chance, she’s helping me live my dream, and is also fulfilling her own dream.”

Director Shi said Xiao would have follow-up treatments at the facility in order to further refine her new face.

The hospital has also said in a surprise announcement that it would help treat Xiao’s mother, following a similar model by waiving a portion of her medical bills.

What is Hutchinson-Gilford Progeria syndrome?

Hutchinson-Gilford progeria syndrome is a genetic condition characterised by the dramatic, rapid appearance of ageing beginning in childhood.

Affected children typically look normal at birth and in early infancy, but then grow more slowly than other children and do not gain weight at the expected rate.

They develop a characteristic facial appearance including prominent eyes, a thin nose with a beaked tip, thin lips, a small chin, and protruding ears.

This condition does not affect intellectual development or the development of motor skills such as sitting, standing, and walking.

This condition greatly increases the chances of having a heart attack or stroke at a young age.

These serious complications can worsen over time and are life-threatening for affected individuals.

However, the teen’s mother has yet to reveal whether she is willing to go under the knife.

Xiao said her immediate goal was to return to school in the hope of one day becoming a doctor or nurse.

Liaoning Vocational College of Medicine has said it would be supporting Xiao’s education, offering her a place in one of its medical programmes.