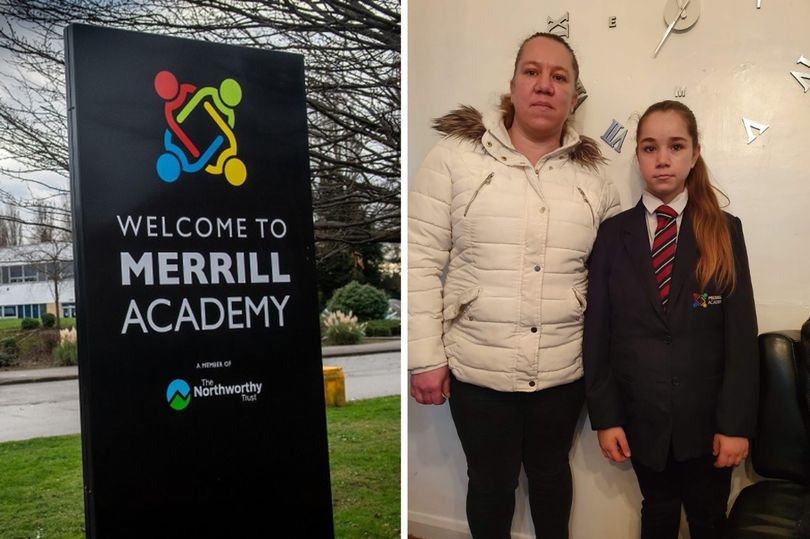 A FURIOUS mom pulled her daughter out of school after cops were called to a row over her $6 trousers. Michelle Doyle said teachers at Merrill Academy sent Libbi...
by Raquel Jayson February 25, 2020 266 Views

A FURIOUS mom pulled her daughter out of school after cops were called to a row over her $6 trousers.

The single mom says she went into the school to complain, but was told to leave by the head teacher.

She claims police arrived at her home saying the school had accused her of “aggressive and threatening behaviour”.

The 42-year-old admitted she swore but denied threatening any staff, and she now says she is so angry she won’t let her daughter go back.

Miss Doyle said: “The school is a pure joke. My daughter has been wearing these trousers since September but suddenly she’s not allowed them.

“It’s really upset her. I went to the school with a friend to ask for an explanation but they wouldn’t give me one. The head teacher then came out and said I needed to leave the premises.

“I was so angry when they escorted us off the premises that I said ‘the school’s s***’ and that my daughter ‘won’t be coming back’.

“I’m so angry about it that I’ve decided to pull Libbi out of the school. I’ve already started applying to get her into Noel-Baker or Chellaston Academy.

“In the meantime, I’ll provide her with some lessons at home.”

Miss Doyle said the trousers worn by Libbi were perfectly smart and that she couldn’t believe the school’s stance.

She said: “Libbi’s really shook up by this. Pupils are made to queue up at the school entrance so teachers can check they’re dressed properly.

“It’s ridiculous. It wasn’t nice for Libbi when she was refused entry in front of everyone.”

A spokesperson for Merrill Academy said: “Due to the nature of the parent engagement with staff, this is now a police matter. Therefore, we cannot comment any further.”

Derbyshire Police told the Sun Online: “An officer was at the school that day on an unrelated matter and was asked by staff to hep diffuse the situation.

“The officer later visited the child’s home to offer further advice. We have now left the matter in the hands of the school.”

Last year we told how parents were furious when a strict head changed the school uniform four weeks into the new term.

Heworth Grange School in Gateshead sent out letters telling parents the new $8.99 polo shirts with the school logos they bought during the summer holidays were being replaced by plain white shirts and tie.

Our healthy little girl, 7, died one minute into routine surgery to have her tonsils removed