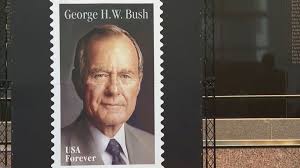 The stamp features a striking image of Bush, who served as president from 1989 to 1993, in a gray suit, white shirt and star-spotted blue tie. America’s 41st president died last year at the age of 94. He is buried at the family’s gravesite at his presidential library in College Station.

Here’s a closer the stamp and what’s planned for the ceremony.

Wednesday’s ceremony is set for 11 a.m. in the Fymire Auditorium at the Annenberg President Conference Center.

Among those attending will be:

The ceremony is free and open to the public, but an RSVP is encouraged. Go to USPS.com/GeorgeHWBush for more information.

Wednesday will mark the first day of issuance for the commemorative stamp, which was designed by Phil Jordan.

The featured image is a portrait of Bush that was painted artist Michael J. Deas and is based on a 1997 photograph of bush taken by Timothy Greenfield-Sanders.

When can I buy it?

The stamp will be available for sale starting Wednesday at Store.USPS.com for 55 cents. A sheet of 20 stamps will cost $11.

It’s a forever stamp so it can be used any time after purchase, regardless of the future price of stamps

Teen runs away with a sex offender she met at church!

Kids home while mother shot after answering knock at the door!