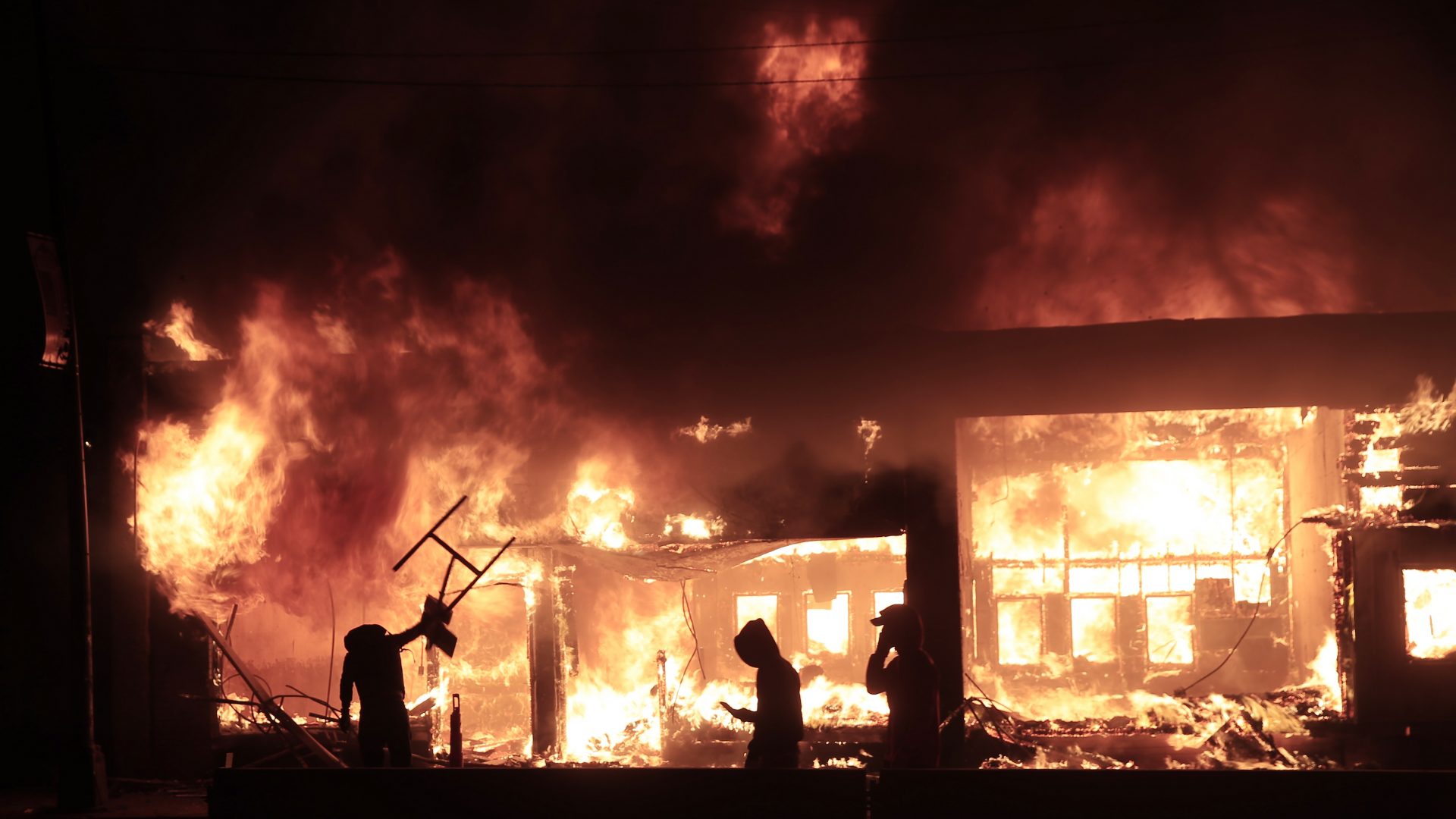 VIOLENT protests have spread across the US as anger over George Floyd’s killing mounts – as a Federal Protection and 19-year-old were shot dead and the Army put on...
by Zach Freeman May 30, 2020 525 Views

VIOLENT protests have spread across the US as anger over George Floyd’s killing mounts – as a Federal Protection and 19-year-old were shot dead and the Army put on standby.

Chauvin was arrested and charged with third-degree murder and manslaughter. He is due to appear in court in Minneapolis for the first time on Monday.

Days of looting and arson in the Minnesota city has escalated into nationwide protests against police brutality.

A 19-year-old man was killed after shots were fired into a crowd during protests in Detroit on Friday night.

Police said the shots were fired from an unknown suspect in a vehicle. An officer was not involved in the shooting.

One died from his injury.

A state of emergency has been declared in Georgia.

The Pentagon has ordered the Army to put several active-duty US military police units on the ready to deploy to Minneapolis.

Soldiers from Fort Bragg in North Carolina and Fort Drum in New York have been ordered to be ready to deploy within four hours if called. Also soldiers at Fort Carson, in Colorado, and Fort Riley in Kansas have been told to be ready within 24 hours.

Meanwhile the White House was briefly locked down yesterday as protesters faced off with the US Secret Service and burned American flags while chanting “No justice, no peace”.

Others scaled the walls of buildings and vandalized them, spray-painting building with phrases like “F**k 12”, an anti-police slang term.

Federal agents were seen arresting at least one person in front of the White House.

The Secret Service was forced to close entrances and exits.

A crew of three men, believed to be Fox News journalists, had their mic stolen and were showered with water by masked demonstrators outside the White House.

Protesters momentarily shut down the White House as:

In Minneapolis, where protests continue to rage, there were reports tonight that tear gas and rubber bullets had been used by police to try to disperse the crowd.

It comes as protesters ignored an 8pm curfew imposed by the city.

The Minnesota Department of Public Safety said shots had been fired at officers in Minneapolis.

Minnesota National Guard is preparing to deploy 1,700 soldiers to the streets to maintain law and order amid violent demonstrations.

He said the Guard deployment was the largest in state history but admitted “there’s simply more of them than us”.

He said those on the streets “don’t give one damn” about the stay-at-home order.

Mr Walz said he believes “white supremacists” and “cartels” are “blending in” with the crowds.

A spokesman for Minnesota Department of Public Safety said: “We’ve got intel reports that have been confirmed but I cannot say we have confirmed we have cells of white supremacists.”

Governor Brian Kemp said that up to 500 members of the Guard would be deployed immediately to protect people and property in Atlanta.

Demonstrators yesterday climbed the CNN sign at the network’s headquarters in Atlanta and unfurled a Black Lives Matter flag.

Protesters also set ablaze an American flag, cheering as windows were broken near the entrance of the center.

The initially peaceful rally in downtown Atlanta quickly became violent when a police vehicle was set on fire.

At least three people were arrested and one officer was shoved to the ground, police said.

“Officers have been subjected to water bottles, eggs, and other items being thrown at them,” said a spokesman for the Atlanta Police Department.

“However we remain hopeful this activity will cease and there will be no need for further arrests or clashes with protesters.”

She said: “The only way we get what we really want is through non-violence. Let’s do this the non-violent way to deal with the evil of our time.”