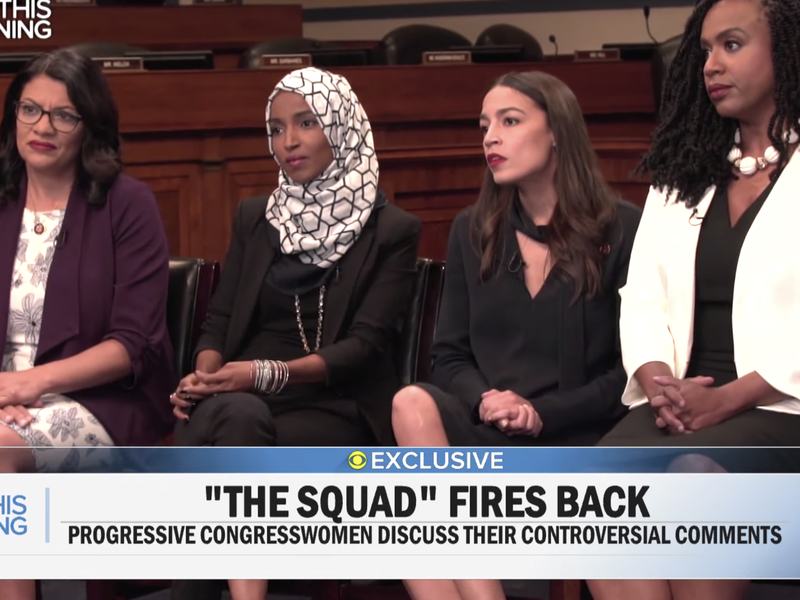 In an extraordinary rebuke, the House voted to condemn President Trump’s attacks against four congresswomen of color as “racist.” The measure, which passed mostly along party lines Tuesday night,...
by Raquel Jayson July 17, 2019 556 Views

In an extraordinary rebuke, the House voted to condemn President Trump’s attacks against four congresswomen of color as “racist.” The measure, which passed mostly along party lines Tuesday night, exposed deep partisan rifts. Only four Republicans voted in favor.

In a Cabinet meeting earlier Tuesday, the president again defended his original tweet telling the progressive lawmakers to “go back” where they came from. The four freshmen lawmakers apparently targeted by the president are Rashida Tlaib, Ilhan Omar, Alexandria Ocasio-Cortez and Ayanna Pressley. Together they are known as the “Squad.” They sat down with “CBS This Morning” co-host Gayle King

In a Cabinet meeting earlier Tuesday, the president again defended his original tweet telling the progressive lawmakers to “go back” where they came from. The four freshmen lawmakers apparently targeted by the president are Rashida Tlaib, Ilhan Omar, Alexandria Ocasio-Cortez and Ayanna Pressley. Together they are known as the “Squad.” They sat down with “CBS This Morning” co-host Gayle King Tuesday on Capitol Hill for their only joint interview, where they shared what it’s like to feud with the most powerful politician in the country.

Below are excerpts from that conversation:

On Trump’s racist tweets: “This is a distraction”
KING: Quoting the president yesterday, you all are people who hate our country with a passion. You hate Jewish people. And you love enemies like al Qaeda. You hear those statements coming from the president of the United States to describe you all and you think what?

OCASIO-CORTEZ: I think that America has always been a story and America has always been about the triumph of people who fight for everyone versus those who want to preserve rights for just a select few. And there is no bottom to the barrel of vitriol that will be used and weaponized to stifle those who want to advance rights for all people in the United States.

PRESSLEY: We can talk about and spin out on hate, about hateful words which are a predictable prompt by the occupant of this White House. And I call him that not because I don’t have respect for the Oval Office.

KING: But it sounds like you don’t have respect for the Oval Office when you call the President of the United States the occupant.

PRESSLEY: No, because he is only occupying the space. He does not embody the principles, the responsibility, the grace, the integrity of a true president and so for that reason, I’m not dishonoring the office. He does every day … This is a distraction, this is a disruption on our leading and legislating and governing on the issues of care and concern and consequence of the American people.

KING: What did you think when you heard the tweet?

TLAIB: For me, I’m hearing about this from folks saying did you see what the president just said at the same time that I’m getting text messages from people saying, “Rashida, what can we do? I heard ICE is now knocking on doors without warrants.” I’m trying to represent my district, a very diverse district with 20 different ethnicities. And I’m trying to fight on their behalf, trying to make sure that they have a voice here. At the same time, I’m dealing with the biggest bully I’ve ever had to deal with in my lifetime and trying to push back on that and trying to do the job that we all have been sent here to do, which is centered around the people at home. This is a distraction. This is a person that really wants to vilify, demonize not only immigrants, but even communities of color as many of my sisters here have been talking about. It is very much a distraction, getting us unfocused.

OMAR: The insinuation of that question in itself is a distraction … I think he wants you to focus on that, and you should be asking why is it that we are being criticized. What is it that we bring to this body?

TLAIB: I’ll tell you what we bring.

TLAIB: We’re an extension of a movement in our country that wants Medicare for all, that wants us to end mass incarceration. That wants us to push back against the attacks on communities of color. I mean, I think all of us have incredibly strong residents in our district that have spoke volumes in electing people like us.

OMAR: And we are a disruption to the business as usual that’s been Washington. Right? We were elected for that purpose.

PRESSLEY: Each of us represent very different districts and each of us bring our unique and our authentic voice to this body. We govern in our own way. What we are are four women who have an alignment of values, shared policy priorities. There is no insurgency here. There’s nothing conspiratorial.

KING: There is no insurgency here?

PRESSLEY: There is no insurgency, and there’s nothing conspiratorial. What we are are four lawmakers who happened to land in the same place on the same issue time and time again.

Tlaib on “impeach the motherf*****”: “I’m real. This is who I am.”
Soon after being sworn in earlier this year, Tlaib sparked controversy when she told a crowd of supporters, “We’re going to impeach the motherf****er.” She refused to apologize for the remark and told King she still does not regret her words.

KING: Do you think that kind of language is helpful and what did you hope would come of that? On your first day?

TLAIB: No. I mean, I, from day one I truly believed that he has committed impeachable offenses but even me personally–

KING: But even if you believe that the fact that you called him–

TLAIB: But I didn’t do it on the House Floor. And I’m gonna be unapologetic in myself. 70% of Americans curse. I’m real. This is who I am. I’m rooted in where I come from and it’s very common for me and for many of my residents to say things like that. But for folks…

KING: So you don’t regret, for folks–

TLAIB: Absolutely not. I’m unapologetic about it. I’m definitely, definitely going to push forward in saying we have to impeach him.

Ilhan Omar doesn’t regret comments criticized as anti-Semitic
Rep. Ilhan Omar drew criticism from both parties earlier this year when she suggested some politicians’ support for Israel is motivated by money. Omar apologized after intense backlash.

OMAR: Oftentimes there are things that you might say, might not hold weight for you, but to someone else, right, the way that we hear and consume information is very different than how the next person might.

KING: So you don’t regret your words either?

OMAR: I do not. But I have gotten the, I am grateful for the opportunity to really learn how my words made people feel and have taken every single opportunity I’ve gotten to make sure that people understood that I apologize for it and I never really want them to-

KING: Would you like people to, would you want to make it clear that you are not anti-Semitic?

OMAR: Yes, I mean and that — nothing I said, at least to me, was meant for that purpose.

On disagreements with party leadership: “Why would I learn a broken playbook?”
The group of freshmen congresswomen has won over liberal fans with their support for ambitious progressive proposals like the Green New Deal, and their calls to impeach President Trump. But their views haven’t always aligned with party leadership or their colleagues.

KING: AOC, I’ve heard people say, ‘You’re new here. Shouldn’t you wait and get the lay of the land to understand how Washington works.’

OCASIO-CORTEZ: I think, one of the things that’s funny, and I’m not laughing at you. I’m laughing at the sentiment because–

KING: You’ve heard that sentiment? I’m not the first person that said that to you.

OCASIO-CORTEZ : Oh, absolutely not. But not just me, but the entire freshman class I would argue, regardless of ideology, was sent here because Americans are sick of how Washington works. So why would I learn a broken playbook, where lobbyists have taken over this place? Where they influence all the bills. Where we vote on things because that’s how things have always been done here. Americans are not getting wage increases. Our government is continuing to sow dysfunction. Why would we operate business as usual when business as usual is not serving the public?

Woman gets a chance to live her modeling dreams out at 51yrs old!