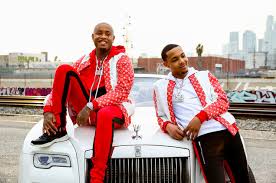 G Herbo and his ex-girlfriend and baby mama, Ariana Fletcher, have a tumultuous history. In April, months after the two broke up, Herbo was arrested for battery charges after Fletcher alleged...
by Alycia Pascual-Pena October 9, 2019 375 Views

G Herbo and his ex-girlfriend and baby mama, Ariana Fletcher, have a tumultuous history. In April, months after the two broke up, Herbo was arrested for battery charges after Fletcher alleged that he “beat the f**k out of me.” Upon his release, the Chicago rapper went on Instagram Live to claim that she had fabricated the story and he had only gone to her home to retrieve jewelry that she had stolen from him. In May, he was charged with one count of misdemeanor battery for dragging Ari by her hair. Reports stated she was left with scratches on her body.

There hasn’t been much public drama between the former couple since this altercation. Herbo has been dating Fabolous‘ step-daughter, Taina Williams, for months and Ari has been on-and-off with boxer, Gervonta Davis.

Amid all the emotional celebrations, some footage of Herbo and Ari’s son in the presence of Taina must have surfaced because Ari took to Instagram to express her anger about it. It appears Herbo disregarded Ari’s explicit request by doing this. “NOW IM TAKING IT ALL THE WAY THERE,” Ari wrote in the expletive-filled caption for a photo that has since been deleted. “I try to be a cool ass baby mama, let you get my son even tho you don’t ever even get him foreal for whatever reason… I be being so cool with you and you really done pushed me past my mf limit now, MY SON B*TCH? IS YOU ON DOPE? Cause when I just checked you and this b*tch the other day y’all swore that wasn’t my baby but this CLEAR AS F*CKING DAY MY SON! You dumb broke crybaby b*tch. I asked you not to have my son around this lame a** h*e…”

JT of City Girls Has Just Been Released from Prison, She Celebrates By Dropping Music – “My First Day Out”

The cutest video you’ll see today! WATCH a 2 Year Old Boy Recite His Positive Affirmation on His Way to School