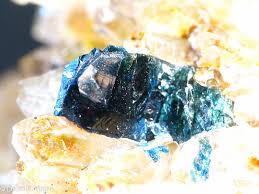 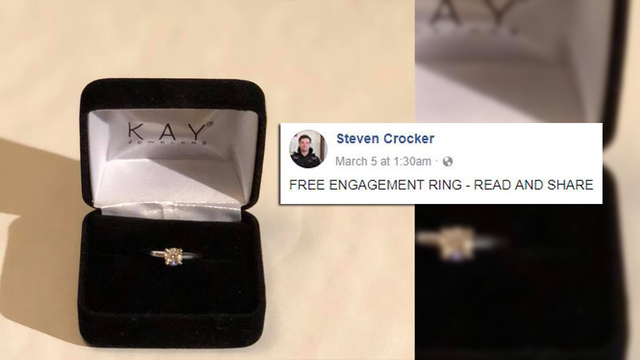 VIRGINIA BEACH, Va. (FOX 13) – True love is hard to find and, for many, so is an affordable engagement ring to signify that love.

A Virginia Beach man hopes his heartbreak can make that significance possible for a yet-unknown couple.

Steven Crocker posted a photo of an engagement ring on Facebook with the caption “FREE ENGAGEMENT RING – READ AND SHARE.”

Crocker explained in his post that he finds himself — for reasons that will go unmentioned — with an unused engagement ring.

He tried to sell it, he explains in his post, but has not been offered anything near the price he paid. So instead of taking a major loss, Crocker wants to turn the ring into a karmic gain and, hopefully, the missing piece to someone else’s love story.

“It’s not about the money, for me, it’s about love, and I’d hate to see a good ring go to waste,” Crocker wrote in his post. “So I’m going to give it away.”

He presents a proposal of a different kind to anyone who reads his post.

Crocker will give the ring to someone who cannot afford it, monetarily, but who wants desperately to take the next step and propose to their partner.

“I want to give it to a guy or girl who is so in love with their significant other and wants to take the next step but cannot afford a ring,” Crocker writes. “I’ll send it anywhere in the US where someone is head-over-heels.”

He admits the chances of scammers contacting him for a chance to claim the ring are high. He says he’s willing to take the risk for the possibility someone will be able to propose to the love of their life.

“I am very aware of the possibility of being scammed for a free ring, but since this is about love I’m going to try to look past that,” Crocker writes.

He says interested applicants should email him the story of their true love.

“Show me pictures of you and your significant other, tell me how you fell in love, tell me their favorite color; whatever you think will convince me of sending this ring to you,” he writes.

Once he’s satisfied the internet has sufficiently spread his message and those interested have sent in him their love stories, he will gather some friends to help him “pick a lucky person.”

“It’s not the fanciest ring in the world but it can potentially make someone very happy for the rest of their life,” Crocker said.

The ring is a size 3.5, but he notes it can be resized. The diamond is a half-carat in 14K white gold.

Crocker added he has no ill-will toward the woman for whom the ring was originally intended, calling her a “phenomenal person” and saying the gesture is larger than the details of their relationship.

Is it over with Usher and second wife Grace Miguel ???