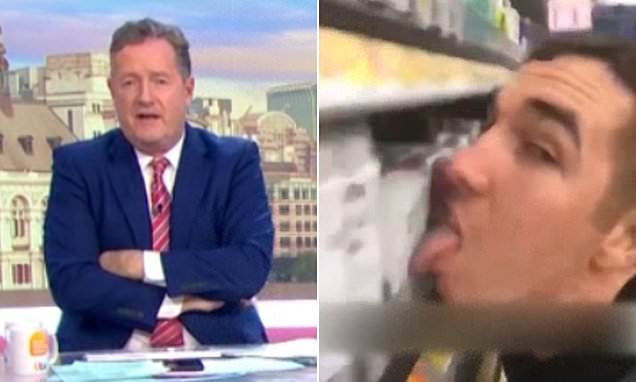 Piers Morgan has called for help to find and arrest a man who licked a line of products in a shop. In the disgusting video shared widely online, a...
by Raquel Jayson March 24, 2020 140 Views

Piers Morgan has called for help to find and arrest a man who licked a line of products in a shop.

In the disgusting video shared widely online, a man with an American accent tells the camera: ‘who is scared of coronavirus’ before licking a long line of products on display in a supermarket.

The Good Morning Britain host rolled the clip on his show to publicly shame the sicko and to stop people anywhere else in the world from getting a similar idea.

The controversial presenter also said that the man in question should be denied healthcare if he contracts the bug himself.

‘This is of somebody in America, who went to a supermarket knowing the coronavirus is attacking everyone in the United States and he did this and posted it online.

‘What I would like to happen to him is I’d like him found, and I am sure they will get him.

‘I would like him put in prison, immediately. And then I would like him deprived of any healthcare should he then get the virus having tried to deliberately give it to potentially lots of other people.

Piers had previously shared the video on his Twitter where he aired the same sentiment to his followers.

Find him, arrest him, imprison him, & deny him any healthcare if he gets the virus.
See how funny the disgusting little pr*ck finds it when his chest is collapsing & he can’t breathe.

On the same show, Phillip Schofield got his own back at Piers Morgan after he made a ‘coming out’ joke at the This Morning host’s expense.

Whitney Houston And Notorius B.I.G Hall Of Fame Inductions Moved To November And Will Now Air On HBO

The Story Of A Pastor And A Prostitute