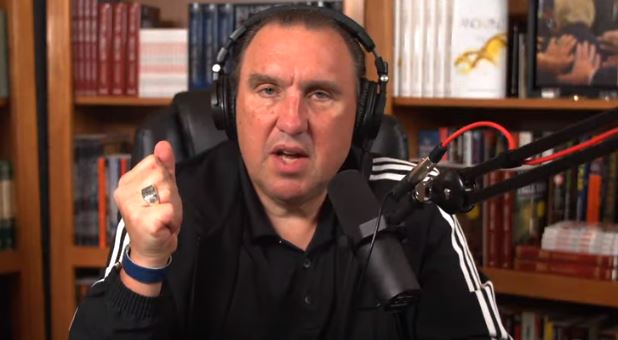 Florida Governor Declares Church Is Essential. Mega Pastor Says Church Will Go On. People Are Shooting At The Church Sign

2:50 PM PT — Governor Ron DeSantis might have just helped out the megachurch pastor who got busted for holding a massive service this weekend, ’cause he just issued clear, statewide guidelines...
by Zach Freeman April 1, 2020 257 Views

2:50 PM PT — Governor Ron DeSantis might have just helped out the megachurch pastor who got busted for holding a massive service this weekend, ’cause he just issued clear, statewide guidelines on what is and isn’t essential businesses amid their just-announced quarantine order … and turns out, gathering in places of worship is one of them. How ’bout that?

Yes … in a crazy turn of events, on Wednesday DeSantis issued mandatory stay-at-home guidelines that are no longer suggested, but required. In the official public document outlining what’s what and what sort of public activities are permitted, the Gov. made sure to get churches and the like in there right at the top. Going out to care for a loved one is 4th.

It’s wild, ’cause Pastor Rodney Howard-Browne just got picked up by cops in Tampa this week for allegedly violating public health rules. Now, it looks like the state’s top dog is saying otherwise, which begs the question … what’s the D.A. gonna do there?

You would think the charges would be dropped by default, but it might be more complicated than that. It’ll also be interesting to see if an apology of some sort will be issued to him for jumping the gun.

As for allowing massive public gatherings like church services and deeming them essential … Florida, man. That’s all we can say 😑Play video content

The Florida pastor who got hauled in by cops for hosting a megachurch service despite quarantine and stay-at-home orders is doubling down … insisting he did NOTHING wrong.

The Tampa-area minister is Rodney Howard-Browne, and he took to his own podcast/telecast shortly after being released Monday night to explain why he did what he did — namely, put hundreds of people’s lives at risk by hosting the service.

RHB has a lot to say, but the gist is that he was simply exercising his First Amendment right — i.e., freedom of religion and separation of church and state. His logic is bizarre. Watch.

There’s more though … Rodney goes IN on the media, sounding very Trump-like by suggesting a lot of outlets are hyping the threat of coronavirus and fear-mongering to get everyone scared and panicked. BTW … more than 800 people in the U.S. died Tuesday.

One interesting note … it sounds like Rodney here thinks the charges he was brought in on — which he incorrectly calls First Amendment violations — will be resolved shortly.

He says he’s willing to do interviews, but only once his lawyers and theirs (the county/state’s) have a chat and put this matter to bed. He also talks TMZ a bit. 👀

One last thing … the guy shows ZERO remorse for his actions, insisting he had no choice. Wrong again, Rod — but go ahead and tell us why you think that is. We’re listening …

685 confirmed cases and 33 deaths In Albany, Georgia as Coronavirus Continues To Hit The City Hard