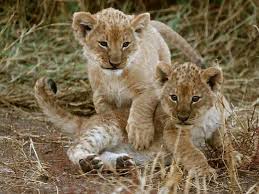 THE birth of the world’s first “test-tube” lion cubs have sparked hope that the some of the world’s most endangered big cat species could be saved from extinction. The...
by Kimberly Botts September 4, 2018 912 Views

THE birth of the world’s first “test-tube” lion cubs have sparked hope that the some of the world’s most endangered big cat species could be saved from extinction.

The male and female lion cubs were born in South Africa last week and mark the first time a successful pregnancy has been achieved through artificial insemination.

A research team at the University of Pretoria pioneered the research of in-vitro fertilisation in which the harvested sperm of a male lion was placed inside the lioness to impregnate her.

Just three and a half months later, the lioness gave birth to the two healthy cubs named Viktor and Isabel at Ukutulu Game Reserve & Conservation Centre.

The South African study examined artificial insemination protocols for the female African lion but the scientific breakthrough may lead to the successful IVF breeding of endangered big cats in the future to help animals like the tiger, snow leopard and Iberian lynx beat extinction.

Professor Andre Ganswindt of the University of Pretoria Mammal Research Institute said: “There are tremendous threats to wildlife due to the loss of habitat and anthropogenic pressures which also affect big cats.”

He continued: “That is why a number of species are listed as vulnerable or endangered but this research could combat the threat of extinction facing several types of big cat around the world.”

Professor Ganswindt added that the research was carried out as a pre-emptive measure as, in order to stabilise populations of endangered animals, the techniques must be developed on a stable population, such as lions in South Africa.

The project’s main researcher Dr Isabel Callealta said: “This was a world first for lions and the idea is to improve our knowledge and understanding of the big cats and move the research quickly forward.”

She continued: “The research will hopefully mean we can start working towards carrying out similar procedures on some of the much rarer big cats like the snow leopard and the tiger in the future”.

The owner of Ukutulu Game Reserve & Conservation Centre Willi Jacobs, 60, said: “They are both absolutely perfect cubs in every way and we decided to honour the researcher Isabel by naming the female cub after her and the male cub after her fiancé Victor.

“When they are big enough they will be introduced to the other lions but meanwhile they are happy and healthy and playful and leading us a merry dance.”

Ukutula, in conjunction with University of Pretoria and international researchers, established the conservation centre, laboratory and biobank at the beginning of 2017 for scientific research.

There are thought to be less than 4000 tigers left in the wild in Asia and less than 7000 snow leopards in the mountains of Central Asia and as few as 300 Iberian Lynx in Spain.

In Africa there are 18,000 lions left in the wild thanks to successful conservation and breeding.

Viola Davis Discusses Hollywood Issues and Tips on Dealing with It!