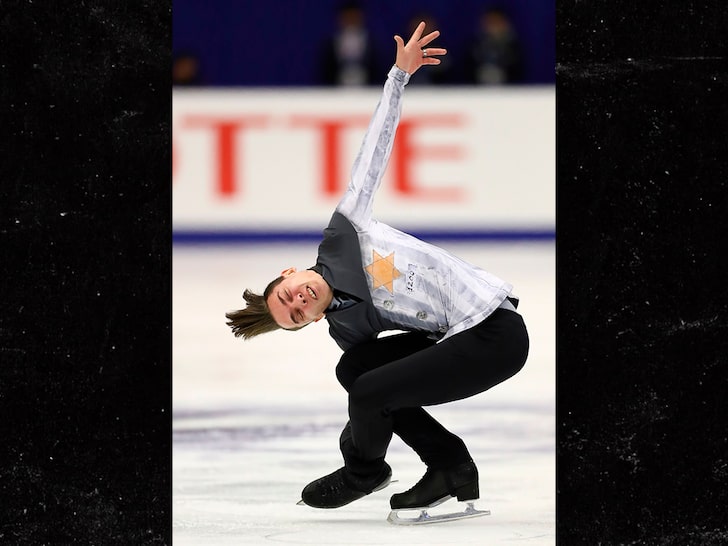 A Russian figure skater wore an Auschwitz-themed costume during a November competition — while skating to music from “Schindler’s List” — and now people are FURIOUS!!! The skater is...
by Zach Freeman December 3, 2019 226 Views

A Russian figure skater wore an Auschwitz-themed costume during a November competition — while skating to music from “Schindler’s List” — and now people are FURIOUS!!!

The skater is 23-year-old Anton Shulepov — who competed in the costume during his free skating performance at the Grand Prix of Figure Skating event … a prestigious tournament featuring top skaters from all over the world, including Israel.

Of course, the outfit contains imagery from Nazi concentration camps — including the yellow star they forced Jews to wear … and other elements of a Nazi prison guard uniform.

If the outfit isn’t offensive enough, things got WORSE this week, when it appeared on a Best Costume list provided by the International Skating Union … a contest that allows fans to vote on their favorite outfits.

The ISU has since removed the costume from the list — insisting it meant to feature Shulepov’s costume from his “Short Program” routine, a plain blue outfit.

The Anti-Defamation League has obviously condemned the costume AND the ISU for including it on the list in a statement from CEO Jonathan A Greenblatt.

“While we understand the need for skaters to be creative in their choice of costumes, Anton Shulepov’s apparent decision to evoke painful Holocaust imagery as part of his routine was insensitive and offensive.”

“We are surprised that the International Skating Union initially posted a picture of this costume as a nominee for ‘costume of the year.’ Yellow Stars of David or other concentration camp imagery have no place in figure skating.”