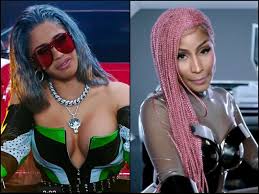 Fight breaks out between Cardi B and Nicki Minaj at Harpers Bazaar!

View this post on Instagram   More footage of the altercation between #NickiMinaj and #CardiB (swipe) (via @tmz_tv) A post shared by Baller Alert (@balleralert) on Sep 7,...
by Joy Smith September 8, 2018 1079 Views

#PressPlay: #CardiB allegedly tried to fight #NickiMinaj at a fashion party tonight! 👀👀 Update: A source connected to the situation said that Cardi tried to fight Nicki but Rah stepped in and ended up fighting #Cardi.

We’re told Cardi said, “Let me tell you something” … as she lunged toward Nicki, but security stopped her inches from contact.

But, Cardi wasn’t done … she pulled off her shoe and threw it at her enemy … missing her target.

Cardi B & Nicki Minaj Got into a fight. Cardio got a big bump on da head. pic.twitter.com/PTLEoP4Kl1

As for Nicki … we’re told cool as a cucumber. She didn’t even flinch.

Cardi was escorted out by security, and she left the building with one shoe on her foot. 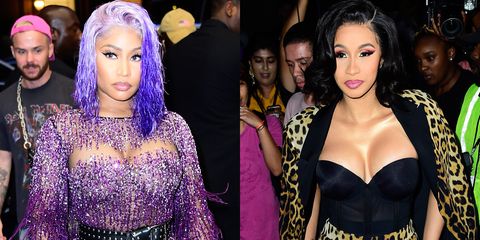 Cardi B and Nicki Minaj got into a major fight as they entered tonight’s high-profile Harper’s Bazaar ICONS Fashion Week event—take a look at the video:

Tonight marks the fifth annual #BAZAARICONS party, where the likes of Lady Gaga and The Weeknd have performed. Kendall Jenner and Bella Hadid walked the carpet tonight shortly before the fight started. A crowd of party-goers were upstairs waiting to watch a performance by Christina Aguilera when the fight broke out.

Uhm Cardi def just got in a fight at the Bazaar party just now. pic.twitter.com/6PlQTLFiho

We’ll update with more as the story develops.

Here’s Cardi taking off her shoe to throw at Nicki (later, part of Cardi’s wig was pulled off):Sources from inside the party say Cardi threw her shoe at Nicki—Cardi had a bump on her face when she walked out and the back of her dress was torn. Here’s a look at the bump:Contrary to reports, Cardi did not fight with Rah

Nicki Minaj leaving after getting in a fight with Cardi B pic.twitter.com/a9truUUBja

Aretha Franklin’s dresses and hats to go up for auction

Cardi B left with injuries and sends a message to Nicki Minaj on Instagram after the fight!