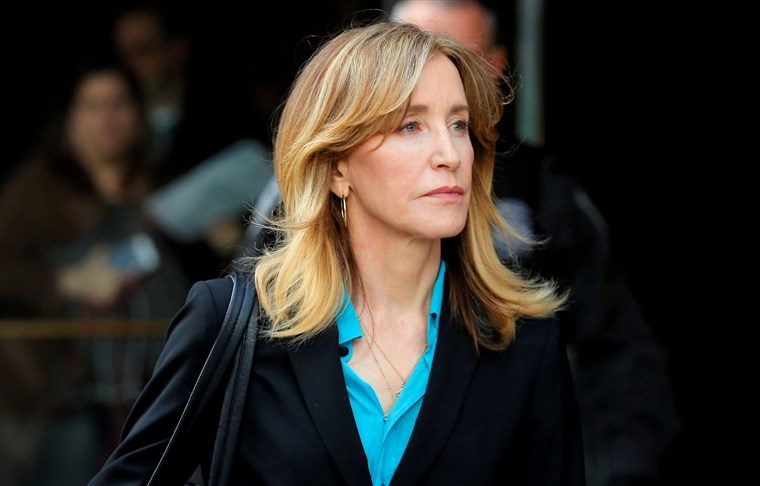 Actress Felicity Huffman reported to a federal prison in Northern California on Tuesday to start a 14-day sentence for her role in a massive college admissions scandal that rocked elite universities around the United States.

The “Desperate Housewives” star surrendered to authorities at the Federal Correctional Institution in Dublin, California, which is about 40 miles east of San Francisco, her representative said.

Huffman, a one-time Oscar nominee and the wife of actor William H. Macy, will also have to pay a fine of $30,000 and perform 250 hours of community service under the sentence handed down by U.S. District Judge Indira Talwani last month.

The 56-year-old actress admitted to paying for someone to proctor and correct her daughter’s college board test, which resulted in the score jumping 400 points above her PSAT performance to 1420 out of a possible 1600.

In prison, she will have the number 77806-112, and she is expected to serve the full 14 days because there is no time off for good behavior in the federal system for sentences less than a year.

“Ms. Huffman is prepared to serve the term of imprisonment Judge Talwani ordered as one part of the punishment she imposed for Ms. Huffman’s actions,” Huffman’s representative said in a prepared statement.

“She will begin serving the remainder of the sentence Judge Talwani imposed — one year of supervised release, with conditions including 250 hours of community service — when she is released.”

Huffman, best known for TV shows “Housewives” and “Sports Night” and her Oscar-nominated work in the movie “Transamerica,” is the most famous of of 50 people charged in the sweeping college entrance cheating scheme.

The FBI probe, dubbed “Operation Varsity Blues” found that well-heeled parents had paid ringleader Rick Singer to get their children into elite universities by boosting their college board exam scores or passing them off as top athletes worthy of special admission.

The case’s supervising prosecutor, U.S. Attorney Andrew Lelling of the District of Massachusetts, said Loughlin should get a tougher punishment than the 14 days handed down to Huffman.

“I don’t think I’d be giving away any state secrets by saying we would probably ask for a higher sentence for her than we did for Felicity Huffman,” Lelling told the Boston station WCVB earlier this month.

Loughlin has pleaded not guilty to money laundering and conspiracy charges and remains free on a $1 million bail.

CUBA GOODING JR. Turns Himself In Again This Morning!