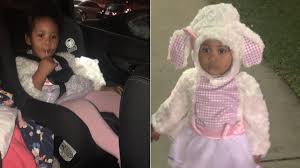 Father and daughter fatally hit by a car while walking in the neighborhood!

A 2-year-old girl was fatally struck and her father was critically injured in a crash that occurred while they were holding hands and crossing a street in the Whittier...
by Joy Smith November 6, 2018 418 Views

A 2-year-old girl was fatally struck and her father was critically injured in a crash that occurred while they were holding hands and crossing a street in the Whittier area Sunday evening, according to the California Highway Patrol.

The crash occurred about 5:30 p.m. along Santa Gertrudes Avenue about a quarter-mile south of the intersection of Leffingwell Road.

The pair, identified as Robert Ferris, 32, and his daughter Harley Ferris, were crossing the street when they were struck by a car heading north on Santa Gertrudes Avenue, the CHP reported. There was no marked crosswalk where the father and daughter crossed the street, according to the CHP.

The driver of the car, William Hurlbut IV, 39, stopped after the crash and cooperated with responding officers. He was driving a 2015 Lexus ES350 sedan.

Harley died after being taken to UC Irvine Medical Center, according to CHP.

A GoFundMe account for her memorial fund spelled the girl’s name differently from the agency, identifying her as Harlee Paige Ferris.

The fundraising page also said her second birthday was on Monday, contradicting CHP’s information that she would have turned 3.

The mother described Harlee as “a very happy care free girl who loved to dance,” telling KTLA “That her mommy and daddy will love her forever.”

Her father remains in critical condition, the CHP reported.

The driver and the victims are all from Whittier.

The crash, which occurred in the unincorporated East La Mirada area south of Whittier, is being investigated, and alcohol and/or drugs do not appear to be factors.