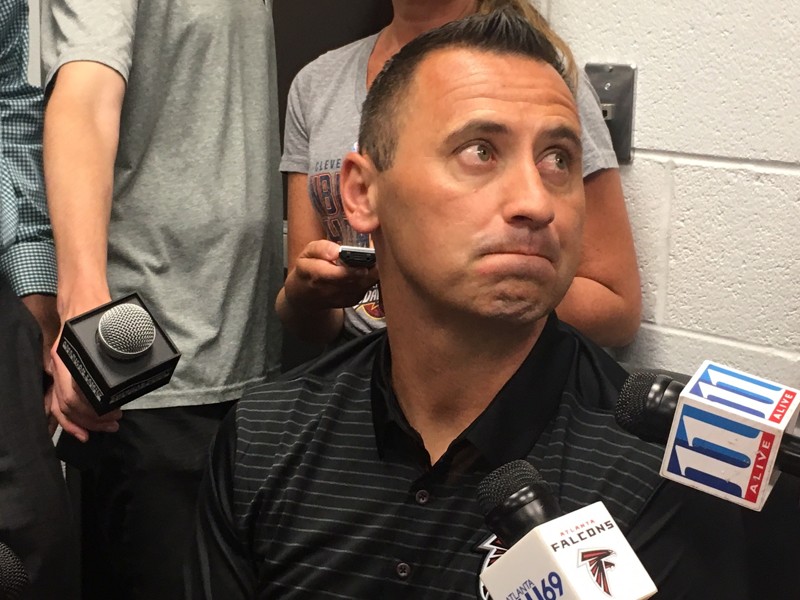 FLOWERY BRANCH, Ga. (AP) – Steve Sarkisian will return as the Atlanta Falcons’ offensive coordinator despite a decline in production in his debut 2017 season. Sarkisian has been the target...
by Zach Freeman January 18, 2018 556 Views

FLOWERY BRANCH, Ga. (AP) – Steve Sarkisian will return as the Atlanta Falcons’ offensive coordinator despite a decline in production in his debut 2017 season.

Sarkisian has been the target of criticism as the Falcons, who lost at Philadelphia in the divisional round of the playoffs last week, fell short of a return trip to the Super Bowl.

Coach Dan Quinn announced Thursday that Sarkisian will return in 2018.

After leading the league in scoring in 2016, the Falcons fell to 15th this season . Quinn said Sarkisian doesn’t deserve the full blame for the offense’s struggles.

“To be clear with you, if this was about one person, that decision already would have been made,” Quinn said, adding he has “no issue with making changes, no problem with that but I have no interest in making change just for the sake of change.”

The Falcons finished 10-6 in the regular season and won a wild card game at the Los Angeles Rams before the 15-10 loss to the Eagles . The Falcons were scoreless in the second half. Sarkisian’s play-calling was second-guessed when Atlanta couldn’t score after having a first down at the Eagles 9. A fourth-and-2 pass from Matt Ryan to Julio Jones was incomplete.

Sarkisian was hired from Alabama after Kyle Shanahan was hired as San Francisco’s coach. Quinn offered the reminder that Shanahan also faced harsh criticism following is first season leading the offense in 2015. Atlanta led the league with 33.8 points per game in 2016.

“A number of people wanted his head” after the 2015 season, Quinn said. “What has stayed the same and what I learned during that process is what you’re doing in order to build consistency, you better be consistent.”

Quinn said the struggles on offense were “not an indication of one play-caller or one player. It’s on all of us.”

Meanwhile, Falcons general manager Thomas Dimitroff said reaching an agreement on a contract extension with Ryan will be “the number one focus” of the offseason.

Ryan is entering the final year of his six-year, $103.75 million contract. He will be 33 next season but is still seen as the team’s long-term starter who, like New England’s Tom Brady, can play to or beyond the age of 40.

“Personally that is my feeling,” Dimitroff said. “He’s a guy who takes care of his body both on and off the field properly. … And of course we’re fortunate with the way the rules are set up in the league, they’re going to preserve our quarterback, hopefully. Again, we want him to be part of this organization for a long time coming.”

“I think it’s not going to be that difficult of a negotiation, quite honestly,” he said. “I think we’re going to be in a good spot with it.”