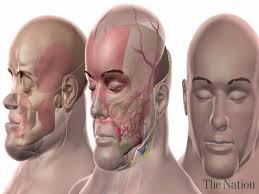 Stubblefield, who went through a hard breakup and a series of medical issues over a short period of time, shot herself in the face with her brother’s hunting rifle...
by Joy Smith August 15, 2018 2857 Views

Stubblefield, who went through a hard breakup and a series of medical issues over a short period of time, shot herself in the face with her brother’s hunting rifle during a 2014 visit to his Tennessee home. The brother, Robert, told National Geographic that he found the then-18-year-old covered in blood and her face “gone.”

According to the report, the bullet tore through her forehead, nose, sinuses, jaw bones and badly damaged her eyes. Surgeons responsible for saving her life in Memphis attempted to cover her facial wound using a tissue graft from her abdomen, but failed, and she arrived at the Cleveland Clinic with “her brain basically exposed.”

A surgical resident carefully cradles Katie’s head to keep it still as she’s situated in the intensive care unit after the 31-hour procedure concluded. To protect her eyes, her eyelids were sutured shut.  (Lynn Johnson/National Geographic)

His team of 15 specialists helped create a nasal passage for Stubblefield, as well as patch her face and form jawbones using her fibula and titanium. They moved her eyes closer together with a distraction device that had to be tightened daily. Part of her thigh and Achilles tendon helped cover the wounds, but Stubblefield had grown accustomed to going out in public with a surgical mask or covered with scarves.

According to the report, Stubblefield was placed on a transplant list and waited for over a year for a donor match. During that time, two potential donors didn’t work out. Her eventual donor, 31-year-old Adrea Schneider, has helped at least seven people through organ donation.

Adrea Schneider, pictured in 2017, became Stubblefield’s face donor after she died of an overdose. Her organs also helped save at least seven others.  (Courtesy of the Bennington Family)

Scheider’s grandmother, Sandra Bennington, who gave consent for the donation, met Stubblefield in person recently, and said she recognized her granddaughter in small features on Stubblefield.

Stubblefield’s surgery marks the 40th face transplant conducted in the world, and the third to occur at Cleveland Clinic.

The procedure is considered experimental and is largely funded by the Department of Defense through the Armed Forces Institute of Regenerative Medicine, National Geographic reported.

Stubblefield faces several more procedures and will remain on anti-rejection medications for the remainder of her life.

She said she hopes to heal to the point where her young nephew isn’t afraid to look at her.

“I want to go out and be a face in the crowd that no one looks at,” she reportedly told her mother, Alesia.

“We all like her nose; her lips are pretty,” Gatsman told National Geographic. “There are things we know are going to get better when we fix them, like the jaw reduction. But some things we can only do so much to improve upon. Her injury may have been the worst injury of any face transplant injury ever. We can’t necessarily make all of her muscles move again. Her tongue is not working well because she lost a lot of tongue muscle and nerves.”

Watch This Season’s Trailer For Greenleaf On Own Network! The Bishop Is In A Little Trouble!

50th Birthday Gift: Will Smith is inviting a fan to watch with him to bungee jump the Grand Canyon!