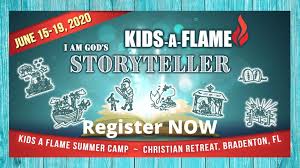 After one of its employees tested positive for COVID-19, Christian Retreat in Bradenton has reconsidered future events. The revelation came one week after its summer camp, where children and...
by Zach Freeman July 1, 2020 757 Views

After one of its employees tested positive for COVID-19, Christian Retreat in Bradenton has reconsidered future events. The revelation came one week after its summer camp, where children and adults huddled together, embracing each other during an evening service.

Home of the Family Church and a year-round resort, the campus hosted more than 100 guests during its annual Kids-A-Flame summer camp from June 15 to 19. The man learned of his test results about one week later, and Pastor Phil Derstine said the employee was “not particularly connected to the summer camp.”

In a recent video on the church and its COVID-19 precautions, Derstine assured viewers that Christian Retreat was constantly cleaning and practicing social distancing. Though on Monday afternoon, he said it was “a little bit hard for children.”

“We’re blessed here in Florida because our governor has said the church is an essential service,” Derstine said in the video. “He never wanted the church to close. And also, just recently, he said the summer camps can go on as usual.”

“In our overnight camps, we’re going to do everything that we can to keep our young people safe,” the pastor continued.

At the weeklong Kids-A-Flame summer camp, about 100 children were huddled in a group, singing and dancing to a musical performance, according to a June 17 video of the camp.

The video shows adults giving the children high-fives and side-hugs, while others placed their hands atop the kids’ heads during a prayer session. Neither the campers nor the adults wore masks in the video.

In an interview on Monday afternoon, Derstine said the crowd “looks closer on television than in real life,” and that “people get caught up and forget in the moment.”

“We instructed everybody — all of our leaders — not to do that, but I saw some of that as well. A lot less, maybe, than we usually see. At the same time, I have to say, these summer camps are just so important for the kids, for the churches, for the parents.”