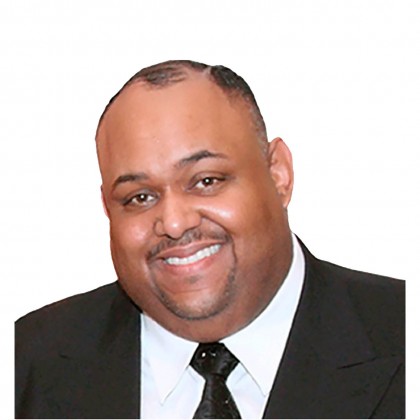 Los Angeles – Edward V. Hill II, who pastored both Mt. Zion Missionary Baptist Church and Spirit of Zion, passed away on August 12, 2019 at his home. He was 52.

“E. V. Hill II, was a true follower of Jesus Christ, said Bishop Charles E. Blake, Sr., Presiding Bishop of Church of God in Christ (COGIC) and Senior Pastor of West Angeles Church of God in Christ. “I am proud to say that he was a dear and beloved friend of mine and of each member of my family. My world has diminished since he is no longer in it. I am comforted by the fact that Heaven is richer by his presence there. Well done friend. Enjoy eternity!”

“We are in shock,” said Pastor K.W. Tulloss, president of the Baptist Minister’s Fellowship. “E.V. Hill held a special place in the faith community aside from his father, though preaching was in his DNA. That he was both Apostolic and Baptist made for a powerful combination and he was not only a huge supporter of clergy but a tremendous prayer warrior.”

“He was regarded as a gentle giant,” said Pastor Michael Fisher. “One who took the mantle of his father and carried it with grace.“

Hill, who was born and reared in Los Angeles, found his passion early in the church.
“My sister says I got it easy from my Dad, but my passion was church,” Hill told a reporter in 2010. “If my dad would tell me ‘son you have homework so you can’t come to the revival tonight,’ I’d pout and scream and start praying through the house.’

“At one point, I went to church musicals so often that I would do my duties at Mt. Zion, we’d get out and I’d run over to West Angeles or to First Apostolic. All of that praising ushered me right on into the filling of the Holy Spirit at 16.’”

Though heavily involved in the church, Hill — who graduated from USC with two degrees, a major in Communications and a minor in Spanish—enrolled at Pepperdine, intent on becoming a lawyer at his father’s urging.

“But,” Hill recounted, “I would be in the library thinking about choir rehearsal or who was handling Bible Study. After one year I had to wrestle with the fact that becoming a lawyer wasn’t what I wanted to do. I confessed my calling to the ministry right then.”

Turning his attention to his passion, Hill worked in every aspect of Mt. Zion ministry from choir director to associate minister, labeling the church as a veritable boot camp in evangelism.

In 2001, he was named senior pastor of Calvary Temple Pentecostal Holiness Church, and following the passing of his Dad, Hill took the reins of Mt. Zion Missionary Baptist Church in 2005.

“His life was a prophecy fulfilled,” said longtime Mt. Zion member and close family friend, Gwen Troy who recalled how as a boy he was always inquisitive about the Bible and would make her kids play church. “Edward being back at Mt. Zion was full circle and he was an excellent pastor and shepherd,” Troy said. “He preached for transformation. He really wanted to see people’s lives change because they heard his messages and he was a hands-on, caring person. He could be touched. Troy also pointed to Hill’s “out of the box” creativity, noting that he had started a theater ministry at Mt. Zion where the church would purchase group tickets to plays at the Music Center and attend together.

“His prophetic gifts, dynamic preaching ability and his tender heart as a pastor, blessed countless individuals beyond the walls of Mt. Zion and the Spirit of Zion,” observed Quaford Coleman, administrator at Mt. Moriah Baptist Church. “The son of a father that was a-giant and a towering-mother in Christendom, Pastor Ed stood on his own merits. Our hearts are broken. He will be missed.”

At the time of his sudden death, Hill and his wife, Tisa, had been preparing to celebrate their 28thwedding anniversary. The couple have an adult son, Edward V. Hill III.

A musical concert and memorial service will be held at Mt. Zion Missionary Baptist Church on Friday, August 23, 2019 at 6 PM. Funeral services are scheduled for Saturday, August 24 at West Angeles Church of God In Christ at 10 AM. Both services are open to the public.

About Pastor Edward Victor Hill, II, M.Div., DPhil, DD
Pastor Edward Victor Hill II was born on April 3, 1967, in Los Angeles, California, to Dr. E.V. Hill Sr. and Jane Edna Coruthers Hill who have both transcended. Pastor Hill accepted Christ into his heart and was baptized in July 1971. Pastor Hill attended the Inglewood Christian School, The Pilgrim School of Los Angeles, and later attended the University of Southern California. He received a BA degree in Communications and a Minor degree in Spanish in 1989. He attended Whittier School of Law of West Los Angeles, and then completed his first year at Pepperdine University School of Law in Malibu.

Pastor Hill was ordained as a Minister of the Gospel in December 1996, at the Mount Zion Missionary Baptist Church of Los Angeles, by his father, Dr. E.V. Hill Sr. In March of 1997, Bishop B. E. Underwood ordained him as a Minister of the International Pentecostal Holiness Church (IPHC) in Palmdale, California.

In November of 1997, Pastor Hill was called to the pastorate of the Calvary Temple Pentecostal Holiness Church as Senior Pastor. At Calvary Temple, Pastor Hill organized 30 different church ministries, with a unique multi-cultural membership consisting of over 32 different nationalities. Under his leadership, Calvary Temple mothered six other churches: Iglesia Peniel – North Hollywood and Los Angeles, The Faith, Hope & Love Church of Glendale, Spirit & Life World Ministries Church in Phoenix, Arizona, Calvary Temple Romanian Church – North Hollywood, and The House of Deliverance PH Church of Lancaster. Pastor Hill was the first African-American to serve on a Conference Board of the IPHC.

On October 13, 2004, Pastor Hill was elected to become the pastor of the Mount Zion Missionary Baptist Church of Los Angeles, where his father served for 42 years. The first Sunday, in January 2005, officially began his pastorate where the church began the processes of restoration and renewal.

In December 2012, Pastor Hill resigned as the Senior Pastor of the Calvary Temple Pentecostal Holiness Church. In January 2013, Pastor Hill founded the Spirit of Zion Fellowship Church in North Hollywood, which is a satellite ministry of the Mount Zion Missionary Baptist Church of Los Angeles.