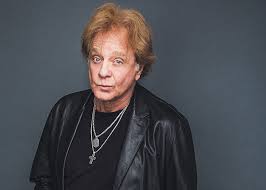 Eddie Money died on Friday, less than a month after he announced that he had been diagnosed with stage 4 esophageal cancer

Eighties hitmaker Eddie Money died on Friday at age 70. A representative confirmed to PEOPLE he succumbed to complications from a recent heart valve replacement.

“The Money family regrets to announce that Eddie passed away peacefully early this morning,” his family said in a statement to PEOPLE. “It is with heavy hearts that we say goodbye to our loving husband and father. We cannot imagine our world without him. We are grateful that he will live on forever through his music.”

The “Two Tickets to Paradise” singer’s death came less than a month after he announced that he had been diagnosed with stage 4 esophageal cancer.

“I thought I was just going in to get a checkup and [the doctor] told me that I got cancer,” Money said in a clip from season two of his reality show Real Money. The show follows the daily lives of the musician, his wife Laurie and their five children.

Money received his diagnosis in the fall of 2018 while filming for the second season of his AXS TV reality series, which began airing that year. The news was announced as the musician recovered from his heart valve procedurethis summer.

Money went on to cancel the rest of his 2019 tour dates in July after developing pneumonia.

“We are incredibly saddened to hear that Eddie Money passed away,” AXS tells PEOPLE in a statement. “Our thoughts are with Laurie, Jesse, Dez, Joe, Julian Zach at this time.” The network plans to air the final five episodes of the series, in addition to a special tribute on Sunday, Sept. 15.

EOPLE in a statement. “Our thoughts are with Laurie, Jesse, Dez, Joe, Julian and Zach at this time.” The network plans to air the final five episodes of the series, in addition to a special tribute on Sunday, Sept. 15.

As the son of a New York City Police Officer, Money initially tried to follow in his father’s footsteps, and actually entered an NYPD training program before quitting and moving to California.

“I would have been a very lenient cop,” Money told Rolling Stone in 2018.

Over the course of his career, Money scored 11 Top 30 hits on Billboard’s Hot 100 and his hit “Take Me Home Tonight” earned him a Grammy nomination.

In 1981, Money overdosed on fentanyl. The incident left him with a badly damaged sciatic nerve, which he recounted in his hit 1982 album No Control.

After falling for his wife Laurie in 1985, Money decided to join a 12-step program and they went on to marry in 1989.

Frank Ocean Sighted​! Frank Ocean Gets Mobbed By Fans at The Tyler the Creator Show (WATCH)