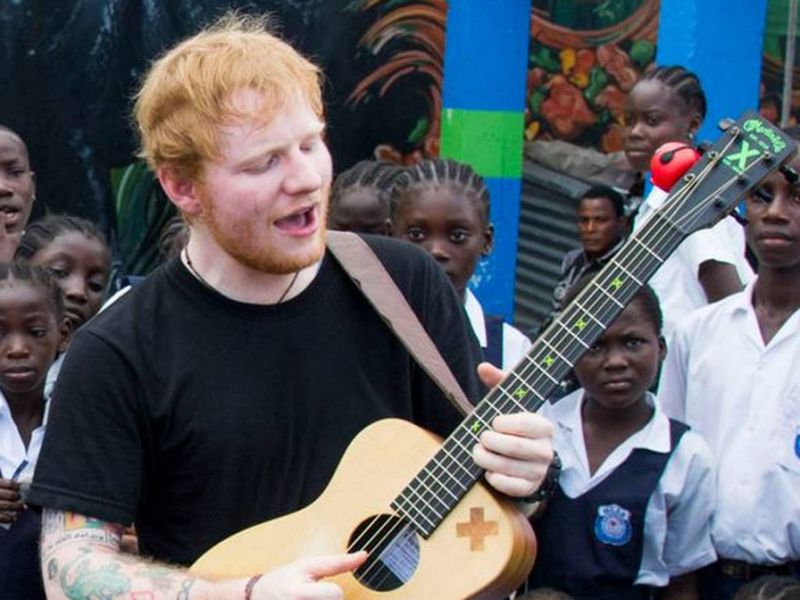 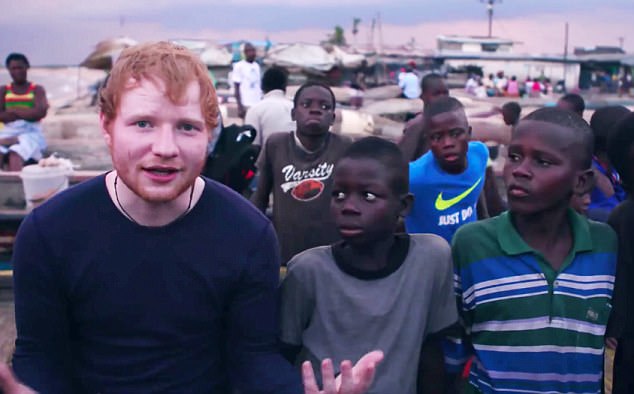 It said that a Comic Relief video showing pop star Sheeran meeting a street boy in Liberia and offering to pay for his housing was ‘terrible’, adding: ‘This video is about Ed Sheeran.

‘It’s literally poverty tourism… What an irresponsible thing to do.’

And a Disasters Emergencies Committee (DEC) film fronted by actor Tom Hardy featuring images of malnourished children in Yemen was described as ‘devoid of dignity to those starving’.

The three films are nominated in the ‘Most Offensive’ campaign category in the Radi-Aid awards from SAIH, which aim to challenge aid groups over repeating stereotypes about those who are living in poverty.

SAIH president Beathe Ogard said: ‘Ed Sheeran has good intentions. But the problem is the video is focused on Ed Sheeran as the main character. He is portrayed as the only one coming down and being able to help.’ 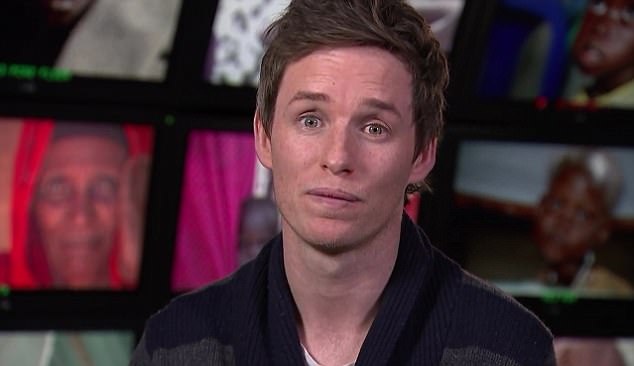 Nicola Peckett, of the charity, said: ‘DEC is not about general poverty in Africa and the developing world.

‘It is specifically for urgent and large-scale humanitarian crises where rapid action and funding are needed. We need to mobilise the public and the response very quickly.’

Liz Warner, the chief executive of Comic Relief, said that its nomination by SAIF would serve as a ‘constant reminder of the need to stay as relevant as possible going forwards and to give a voice to the people affected by the issues we care about’.

But she added: ‘If we do win this award, I would still like to say thank you to the artists whose support means we have reached mass audiences and raised vital funds for life-changing projects in the UK and around the world.’

‘It is not surprising,’ she told the Guardian. ‘Pity and shame are easy emotional levers to pull.

‘They are proved to bring in the dollars. It’s a transactional way of looking at viewers and readers, to say, “I just want your money.”’

Miss Ogard said that, by contrast, small organisations were coming up with more creative ideas – nominated for the watchdog’s ‘Golden Radiator’ award.

They included a ‘powerful and positive’ film by the group War Child Holland which features a child in Yemen, laughing and playing with a Batman character.

When bombs drop and the family are forced to move, ‘Batman’ morphs into the boy’s father and the tag line appears: ‘For some children, fantasy is the only way to escape reality.’

Miss Ogard said: ‘It shows it is possible to play on our emotions without playing on guilt.

‘You see a child using his imagination and playing. It is a refugee in Yemen but could be a child in Norway. It really hits a nerve.’