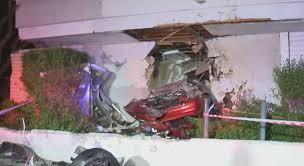 Authorities are investigating a crash Wednesday morning that left a BMW inside a building in Norwalk. The incident was reported just before 2 a.m. at the Coast Plaza Medical...
by Joy Smith May 15, 2019 279 Views

Authorities are investigating a crash Wednesday morning that left a BMW inside a building in Norwalk.

Arriving deputies found a red BMW had crashed through the wall of building and ended up inside.

One person who was inside the car at the time of the crash was taken to a local hospital with injuries that were not considered to be life threatening, Chavez said.

A tow truck driver who has worked in the area for 27 years said the “T” intersection of Studebaker Road where the 105 Freeway ends is no stranger to crashes.

“It’s either into the building, or against a wall, or into the guardrail,” Vernola’s Towing driver Martin Kunkel said.

It was unclear whether drugs or alcohol were a factor in the crash, which is under investigation.