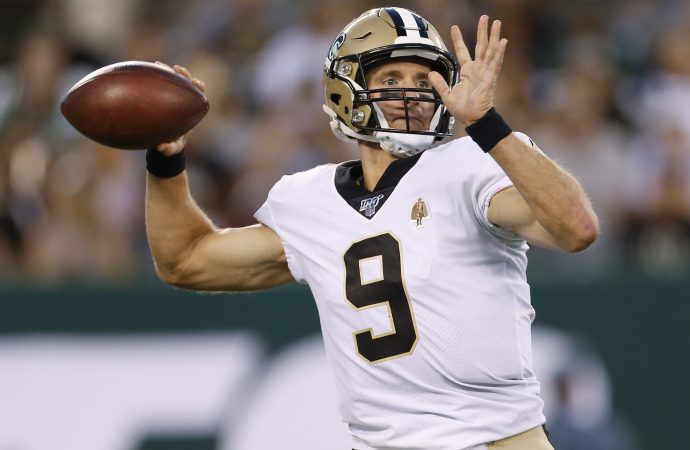 New Orleans Saints quarterback Drew Brees throws a pass during the first half of the team’s preseason NFL football game against the New York Jets on Saturday, Aug. 24,...
by Raquel Jayson September 14, 2019 248 Views

NEW ORLEANS – A Louisiana court’s recent dismissal of a lawsuit against the NFL over officiating at a January playoff game is now being cited by attorneys for the Catholic Church as they fight civil lawsuits over alleged sex abuse by clergy.

A Tuesday filing by church attorneys quotes from the Supreme Court’s Sept. 6 decision dismissing a suit filed by attorney and Saints fan Antonio LeMon. LeMon and three others had sued the NFL for alleged fraud after officials failed to call blatant pass interference and roughness penalties during a key play in a Saints playoff loss to the Los Angeles Rams.

“Just as it is ‘not the role of judges and juries to be second-guessing the decision taken by a professional sports league purportedly enforcing its own rules,’ it is certainly not the role of judges and juries to adjudicate whether or not a religious entity such as the Archdiocese has complied with its own rules, doctrines, or policies,” the filing says. “Moreover, the right of religious entities to govern themselves is guaranteed by both the United States and Louisiana Constitutions, while professional sports leagues have no similar constitutional protection.”

That case involved a victim identified as John Doe who says he was abused when he was a child by defrocked deacon George Brignac, now in his 80s. Brignac has denied improperly touching children. An independent review board at the archdiocese deemed at least one of multiple sexual abuse claims against Brignac to be “credible” in 2002.

On Friday, the dismissal of the NFL suit was cited again by church attorneys in a lawsuit by a victim identified as “J.W. Doe” involving allegations against former priest Lawrence Hecker. Hecker’s name was among those on a list the Church released in November of defrocked clerics who were the subject of credible allegations of sexual abuse. Hecker has denied the allegations.

Lower courts have declined to throw out the cases and the Church is seeking to have the Supreme Court review those decisions.

In past court responses to church lawyers’ moves to dismiss the lawsuits, attorneys for plaintiffs in both cases have argued that constitutional protections for the Church do not extend to matters involving child molestation.

“Even the most devout Saints fans and Catholics understand that there is a vast difference between grown men of the cloth raping children, and a referee blowing a call in a game, and how each organization should deal with these issues,” attorneys for the plaintiffs said in a statement Friday.