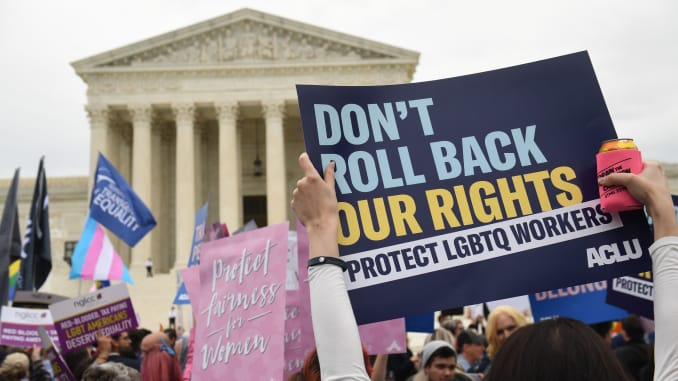 The Supreme Court appeared deeply divided Tuesday on a major civil rights question: whether gay and transgender people are covered by a federal law barring employment discrimination on the basis of sex. The...
by Raquel Jayson October 8, 2019 188 Views

The Supreme Court appeared deeply divided Tuesday on a major civil rights question: whether gay and transgender people are covered by a federal law barring employment discrimination on the basis of sex.

The court’s rulings in three cases, which are not expected until next year, seemed to hinge on President Donald Trump’s two nominees. Associate Justice Neil Gorsuch called the dispute over transgender rights “close” but more likely an issue for Congress to address. Associate Justice Brett Kavanaugh directed his only question to a lawyer for two employers that fired gay workers, leaving his position in doubt.

The court’s four liberal justices forcefully denounced the firings of two gay men and a transgender woman from Georgia, New York and Michigan and made clear they believe all three should be protected by the statutory ban on sex discrimination.

“We can’t deny that homosexuals are being fired merely for being who they are and not because of religious reasons, not because they are performing their jobs poorly,” Associate Justice Sonia Sotomayor said, calling it “invidious behavior.”

The three cases are among the most significant on the high court’s 2019 docket, and the justices’ rulings are likely to come in the heat of the 2020 presidential campaign.

The challenges pick up where the same-sex marriage battle left off in 2015, when the court ruled 5-4 that states cannot bar gay men or lesbians from getting married.

What’s different is the court itself: The author of four major opinions expanding gay rights, Anthony Kennedy, retired last year and was succeeded by the more conservative Kavanaugh. If his vote was counted on by those taking the employers’ side, he gave no hints. He was mostly silent during Tuesday’s two hours of oral arguments.

Gorsuch said sex was at least “in play,” an acknowledgment that the gay and transgender workers claiming sex discrimination have a reasonable argument. What he did not say: that the courts should fix it.

Instead, Gorsuch said the “massive social upheaval that would be entailed in such a decision” in the fired workers’ favor points more toward Congress. “It’s a question of judicial modesty,” he said.

The three plaintiffs are Gerald Bostock, 55, a former child welfare services coordinator from Georgia; Donald Zarda, a former New York skydiving instructor who died at 44 in 2014 but is represented by his sister and former partner; and Aimee Stephens, 58, a former funeral home worker from Michigan who is transgender.

Throughout the debate inside a packed courtroom, the court’s conservative and liberal justices tangled over the text of the 1964 statute, the proper male-female and gay-straight comparisons to make and the role of the courts in righting societal wrongs.

The conversation veered from comparisons made by liberal justices between same-sex relationships and interfaith marriages, to concerns voiced by conservative justices that a win for LGBT rights would endanger men’s and women’s restrooms, dress codes and fitness tests.

Rather than claiming a constitutional right to equal treatment, the challengers must convince at least five justices that the word “sex” in the Civil Rights Act of 1964 incorporates sexual orientation and gender identity.

“All you need to do is show that sex played a role here,” said Pamela Karlan, the lawyer representing Bostock and Zarda.

That clearly was a stretch for some conservative justices.

“You’re trying to change the meaning of what Congress understood sex to mean in 1964,” Associate Justice Samuel Alito said. While Associate Justice Clarence Thomas stayed characteristically silent, Alito seemed most aligned with the employers and the Trump administration.