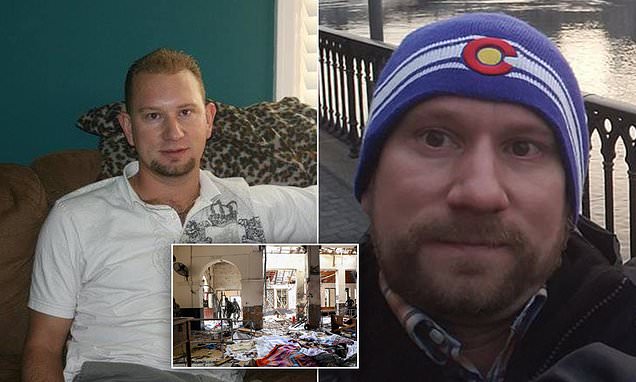 Denver Man Posted On His Social Media He Was Excited To Be Heading To Sri Lanka Now He’s Confirmed Dead From The Attack!

A Denver man who had been missing in Sri Lanka since the deadly attacks on Easter Sunday has been confirmed dead, according to his employer. Dieter Kowalski, 40, of Denver, landed...
by Raquel Jayson April 22, 2019 387 Views

A Denver man who had been missing in Sri Lanka since the deadly attacks on Easter Sunday has been confirmed dead, according to his employer.

Dieter Kowalski, 40, of Denver, landed in Colombo for work on Sunday. On Monday morning, his employer confirmed to FOX31 and Channel 2 that he was among those killed at the Cinnamon Grand Colombo hotel.

Kowalski, who was originally from Wisconsin, worked as a senior technical operations lead for Pearson, an education publishing company.

In an email shared with FOX31, the company confirmed Kowalski’s death:

“We mourn Dieter deeply today. We pray for his soul, and for his family and friends,” the email from Pearson’s CEO John Fallon said. “We pray, too, for our colleagues in Sri Lanka, and Denver, and Boston, and in Pearson offices around the world.”

“We’re angry that a good man, who took simple pleasure in fixing things, has been killed, along with many others, by evil men and women who know only how to destroy,” he said. “In these desperately difficult days, let’s honour Dieter by showing that love ourselves, by taking extra care of each other – at work, at home and in our communities.”

“We are doing all we can to support Dieter’s family, colleagues and friends”

More than 200 people were killed and hundreds more were wounded in Sri Lanka’s deadliest violence since a devastating civil war in the South Asian island nation ended a decade ago.

The explosions — mostly in or around Colombo, the capital — collapsed ceilings and blew out windows, killing worshippers and hotel guests in one scene after another of smoke, soot, blood, broken glass, screams and wailing alarms. Victims were carried out of blood-spattered pews.

The U.S. said “several” Americans were among the dead, while Britain, China, Japan and Portugal said they, too, lost citizens.

The scale of the bloodshed recalled the worst days of Sri Lanka’s 26-year civil war, in which the Tamil Tigers, a rebel group from the ethnic Tamil minority, sought independence from the Buddhist-majority country. The Tamils are Hindu, Muslim and Christian.

Sri Lanka, situated off the southern tip of India, is about 70 percent Buddhist. Scattered incidents of anti-Christian harassment have occurred in recent years, but nothing on the scale of what happened Sunday.

There is also no history of violent Muslim militants in Sri Lanka. However, tensions have been running high more recently between hard-line Buddhist monks and Muslims.

Two Muslim groups in Sri Lanka condemned the church attacks, as did countries around the world, and Pope Francis expressed condolences at the end of his traditional Easter Sunday blessing in Rome.

Billionaire fashion mogul loses 3 of his 4 children in attacks