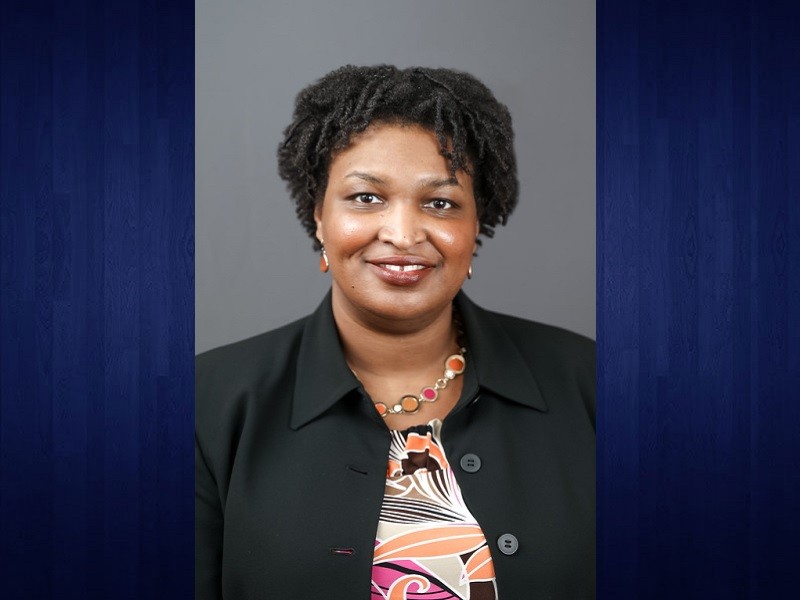 Stacey Abrams will be doing more than rebutting President Donald Trump next week. As the first black woman to deliver a Democratic response to a State of the Union...
by Katricia Brown January 31, 2019 381 Views

Stacey Abrams will be doing more than rebutting President Donald Trump next week. As the first black woman to deliver a Democratic response to a State of the Union address, she’ll represent what many in the party see as their political future. 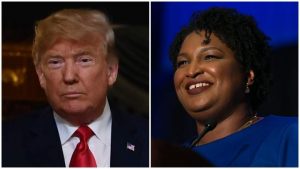 In picking Abrams, the Georgian who narrowly lost her bid to be the nation’s first African-American woman governor, Senate Minority Leader Chuck Schumer is reflecting the party’s hope to win future elections with appeals to women and people of color. He’s also signaling the party’s desire to make inroads in the diversifying South and Sun Belt after disappointing losses there during last year’s midterms.

Abrams, 45, represents the growing political clout of black women. That’s something Schumer wants to tap into by recruiting her to compete in next year’s Georgia Senate race, a decision that could have national implications for Democrats if she successfully flips the seat and, in the process, turns out enough voters to make the Deep South state competitive at the presidential level.

Schumer and others “understand the power and prowess and contributions of black women … and choosing Stacey Abrams is the physical embodiment of that recognition,” said Democratic strategist Symone Sanders.

The speech offers Abrams a high-profile launching pad to a Senate campaign. Though she hasn’t decided whether she’ll run, Schumer has spent the past several weeks courting Abrams to challenge first-term Republican Sen. David Perdue. She has also met with Nevada Sen. Catherine Cortez Masto, chairwoman of Senate Democrats’ 2020 campaign efforts, House Speaker Nancy Pelosi and Sen. Kamala Harris, a presidential contender who is currently the lone black woman in the Senate.

There’s virtually no path to a Democratic Senate majority without defeating Perdue, who raised the prospect of an Abrams challenge in a fundraising appeal Wednesday. But beyond the Senate math, some Democrats hope an Abrams candidacy could help them win Georgia’s 16 electoral votes in a presidential election. 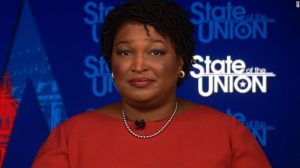 With its growing diversity and urbanization, Georgia is being eyed as one of the next battleground states. Abrams’ performance in 2018 surprised observers who assumed a toss-up environment was several elections away. Her 1.92 million votes were about 85,000 more than what Democrat Hillary Clinton received in a higher-turnout presidential election two years earlier.

Despite Abrams’ loss, her presence at the top of the ticket helped others. Democratic Rep. Lucy McBath flipped a suburban Atlanta congressional seat Republicans had occupied for decades. A neighboring suburban district went narrowly to the GOP incumbent and is again a top Democratic target in 2020. Democrats also flipped at least a dozen state legislative seats across the northern Atlanta suburbs, mirroring trends in metro areas across the country.

Abrams’ high-wattage return to public life elevates her — at least for now — above fellow 2018 candidates who drew national attention but lost: Texas Senate nominee Beto O’Rourke and Andrew Gillum, the former Tallahassee mayor who ran to become Florida’s first black governor. O’Rourke is considering a presidential bid, but has taken a back seat as high-profile senators formally launch campaigns. Gillum recently opted to join CNN as a political commentator.

Yet for all Abrams’ star power, the juxtaposition with Trump could highlight Democrats’ struggles among white voters outside metro areas, where Trump draws his strongest support. During her gubernatorial campaign, Abrams emphasized the importance of Medicaid expansion to Georgia’s rural hospitals, trying to reach both small-town white voters and the considerable black populations in central and southern Georgia.

Returns nonetheless showed her losing ground from Democrats’ 2014 and 2016 performances in rural counties. Had Abrams replicated Democrats’ 2014 percentages across rural Georgia alongside her strength in cities and suburbs, she’d likely be governor.

Former Georgia Democratic Chairman DuBose Porter, a longtime Abrams mentor and confidant, is a small-town white Democrat who insists Abrams’ message has wide appeal. “She will talk about the issues that really do matter to working Americans and families who Stacey Abrams speaks for more than anyone else I know,” Porter said.

As she prepares for the biggest political speech of her life, Abrams will have to decide what kind of tone to strike.

Running for governor, she rarely mentioned Trump directly unless asked, sticking mostly to state-based issues. She won’t have that luxury in a nationally televised address.

She’s built her reputation as a wonkish but optimistic politician who argues both a visionary and pragmatic liberalism. But her last high-profile speech was unapologetically terse as she ended her gubernatorial bid without a traditional concession. Instead, she accused now-Gov. Brian Kemp of using his last post as Georgia secretary of state to deny thousands of Georgians access to the ballot box, effectively ensuring his own promotion.

“So let’s be clear,” she said. “This is not a speech of concession because concession means to acknowledge an action is right, true or proper. As a woman of conscience and faith, I cannot concede that.”

Porter said he expects Abrams will be “thoughtful” in her approach.

“She’s speaking on behalf of an alternative to what we’ve had in Washington the last two years,” Porter said. “It’s not about her. It’s about something better for everyone.”