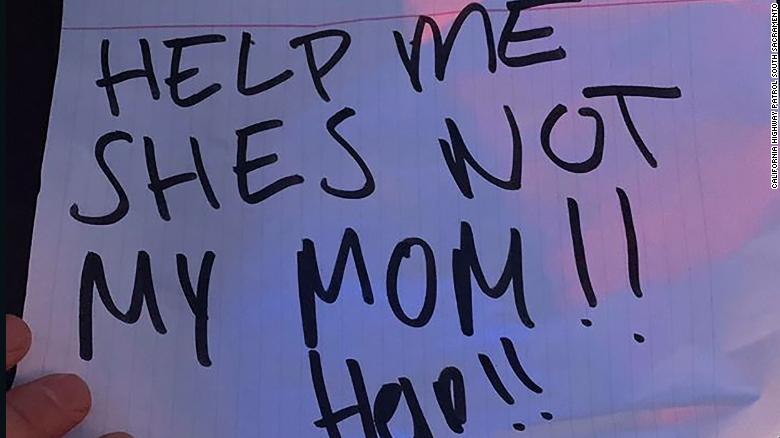 Officers in California pulled over a car after people spotted a girl holding up this note. (CNN)Concerned drivers called police in California this weekend after seeing a child hold...
by Raquel Jayson January 13, 2020 204 Views

Officers in California pulled over a car after people spotted a girl holding up this note.

(CNN)Concerned drivers called police in California this weekend after seeing a child hold up a sign with a plea for help.Passing motorists spotted the sign, “Help me, she’s not my mom!! Help!!” in the Sacramento area Saturday, according to authorities. A girl was holding up a piece of notebook paper in the back seat.

Two motorcycle officers and a K-9 unit responded in a “high risk enforcement stop,” California Highway Patrol South Sacramento said in a statement on Facebook.After speaking with the driver, officers discovered it was all a joke. The girl’s mother was driving, and she had no idea what her daughter was doing in the back seat.

The child had “made it all up and thought it was a fun thing to do,” CHP South Sacramento said. CHP did not report the age of the child.Once the terrifying plea was dismissed as child’s play, the mother and daughter were free to go, CHP said.McDonald’s employees assist woman who mouths ‘help me’ in the drive thruOfficers reminded parents to keep an eagle eye on their children, even when they’re in the back seat.”This is a reminder that parents need to be aware of what their children are doing in the back seat at all times,” CHP South Sacramento said in a statement. “Six CHP units were assigned to this call instead of responding to legitimate calls or patrolling their beats because of this hoax.”

Parents had a lot to say about the incident. More than 2,000 people commented on the Facebook post.Some people suggested the child should get a ticket, while others recommended community service.One mom wanted to make sure the child’s parent was not to blame.”The parent was driving.

How do you expect her to be responsible and drive without distractions if you also want her to be focusing on a teenager in the back of the car that I can assume she thought was being well behaved?” Heather Lynn Wood wrote on Facebook. “Not fair to mom shame.”