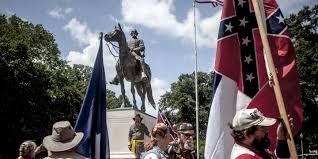 Confederate statues may be coming down in Atlanta, Birmingham and Memphis

The Confederate soldier presides over Piedmont Park, a lonely but still heroic figure. The Civil War has ended; now an angel is guiding him to lay down his rifle. Atlanta’s...
by Joy Smith February 12, 2019 447 Views

The Confederate soldier presides over Piedmont Park, a lonely but still heroic figure. The Civil War has ended; now an angel is guiding him to lay down his rifle.

Atlanta’s Peace Monument, erected in 1911, honors the Peace Mission led by Southerners to reconcile with the North after America’s deadliest conflict.

What’s missing is the reason that Confederate leaders seceded from the United States and attacked it in the first place: to preserve and extend the enslavement of African-Americans. The reconciliation it depicts is between the whites of the South and the whites of the North – it has nothing to say about black Americans, their experience with slavery, or their struggle for equality and justice.

For that reason, the Peace Monument in recent years has been the target of protests and vandalism.

And it’s why civil rights leaders and public officials in this majority-black city now want it removed.

But there’s one obstacle to taking the statue down: state law.

As public opposition to symbols of the Confederacy has grown, Georgia is one of several states that has moved in recent years to protect them. New laws throughout the South are blocking local governments from removing statues, monuments and other markers from public view.

Now leaders in Atlanta are considering an alternative: adding signs to the Peace Monument to explain that the Peace Mission excluded African-Americans – 200,000 of whom fought in the war. Three other city-owned memorials – the Peachtree Battle monument, the Confederate Obelisk and the Lion of the Confederacy – would also be “contextualized.”

“Don’t leave them uncontested,” says Sheffield Hale, president and CEO of the Atlanta History Center. “If you want to leave them, you’d better tell the truth about them.”

Some say new signs aren’t enough. Heidi Beirich is director of the intelligence project at the Southern Poverty Law Center.

“A plaque standing next to something that massive and already offensive can’t really undo the harm to citizens who are being exposed to it,” she said. “It’s very, very hard to write history correctly about what happened in the Confederacy and in the South when you’re facing monuments.”

It’s the next phase in the national debate over monuments to the Confederacy: What can local officials do when the state says they can’t take them down? 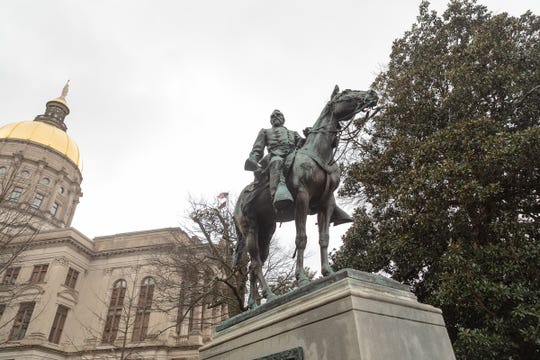 Communities across the South have tried a range of approaches.

► The City of Birmingham, Alabama, covered its Confederate Soldiers and Sailors Monument with plastic in 2017 and built a plywood enclosure around it. The state’s attorney general sued, citing the Alabama Memorial Preservation Act, approved that year. But a state judge threw the law out last month, saying it infringed on Birmingham’s “right to speak for itself.”

► City leaders in Memphis wanted to remove statues of Confederate President Jefferson Davis, Gen. Nathan Bedford Forrest and Capt. J. Harvey Mathes from two public parks. Under the Tennessee Heritage Protection Act, they were required to get a waiver from the state historical commission. When the commission rejected their request, they came up with a different solution:

► Protesters at the University of North Carolina took matters into their own hands last August, toppling a statue of a Confederate soldier that had stood on campus for more than a century. State law prohibits the university from moving “Silent Sam” to another jurisdiction; some officials say the law requires them to restore the statue to its pedestal.

Officials in New Orleans, Baltimore and other cities, unrestrained by state laws, have taken down Confederate monuments.

Each state gets to memorialize two figures in Statuary Hall in the U.S. Capitol. In recent years, some states have replaced Confederate figures with civil rights leaders or other notable figures.

In some places, those moves have drawn opposition. The Sons of Confederate Veterans has filed lawsuits over the removal of memorials.

Walter D. Kennedy, the organization’s chief of heritage operations, says the soldiers and sailors whom the monuments memorialize made honorable contributions to the Confederacy. The public, he says, should look beyond slavery and white supremacy.

“Heroes are not people that are flawless,” Kennedy said. “We look at our history and we point to the positive things in their life.”

Confederate memorials – and flags and place names – have stoked controversy since they began to proliferate a century ago.

The debated heated up in 2015, when a white supremacist murdered nine black church members in Charleston, South Carolina. Dylann Roof had shared racist views and posed on social media with a Confederate battle flag.

The deadly 2017 white supremacist rally in Charlottesville, Virginia, was ostensibly sparked by a proposal to remove a statue of Confederate Gen. Robert E. Lee from a public park.

Flowers, signs and chalk messages mark the spot where Heather Heyer was run down by a neo-Nazi at the white supremacist rally in Charlottesville, Virginia, in 2017. (Photo: Mike Tripp, The News Leader, via USA TODAY NETWORK)

The rally, and the murder of demonstrator Heather Heyer, prompted other communities – including Baltimore and Birmingham – to take action against their own memorials.

The Georgia law dates to 2001, when then-Gov. Roy Barnes wanted to redesign the state flag. Its close resemblance to a Confederate battle flag was drawing criticism both inside and out of Georgia, threatening tourism and other business.

Lawmakers, split on the redesign, reached a compromise: The state would get a new flag but prohibit the removal of Confederate memorials from public spaces.

The controversy didn’t go away.

State Rep. Renitta Shannon, a Democrat from the Atlanta suburbs, introduced legislation last week that would prohibit the display of Confederate monuments in public places outside museums and battlefields. It also would bar the use of taxpayer dollars to maintain the monuments.

“These are widely recognized symbols of of hate, and it symbolizes a time when black folks were second-class citizens in this nation,” Shannon told USA TODAY. “This bill is about restoring the dignity of black taxpayers.”

State Sen. Jeff Mullis, a Republican from northwestern Georgia, introduced legislation that would increase protections of monuments and require anyone who vandalize them to pay for the damage.

“We need to calm down and respect the wishes of our previous ancestors of whatever kind of monument their city thought was important at that time,” Mullis told the Atlanta Journal-Constitution.

He said his legislation would “apply to all government monuments, not just ones of a specific nature.”

“This legislation is about protecting and respecting the history of Georgia,” he said. 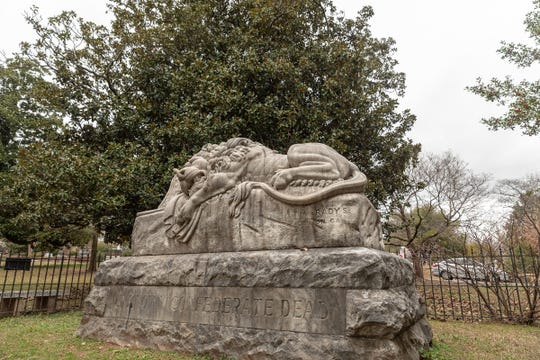 The Lion of the Confederacy at Oakland Cemetery, resting place of Confederate soldiers. (Photo: Lynsey Weatherspoon, for USA TODAY)

The oldest Confederate monuments date to the end of the Civil War in 1865. The earliest were erected in cemeteries to honor the dead.

But in the first decades of the 20th century – the era of Jim Crow – the United Daughters of the Confederacy launched a building campaign, encouraging and sponsoring memorials across the South and beyond.

These monuments promoted the revisionist Lost Cause view of the Confederacy: The war wasn’t about slavery so much as states’ rights; Confederate soldiers were heroes defending their families and homes.

Duke University scholar Tim Tyson has written extensively about the memorials. He says they don’t teach history – they rewrite it.

Tyson speaks of the 1913 dedication ceremony for Silent Sam, at which industrialist Julian Carr boasted of whipping an enslaved black woman.

“I horse-whipped a negro wench until her skirts hung in shreds,” Carr told the crowd. He called it a “pleasing duty.”

“Putting (Silent Sam) in a public place is not commemorative, it’s celebratory,” Tyson said. “The notion that this teaches history is just preposterous.” 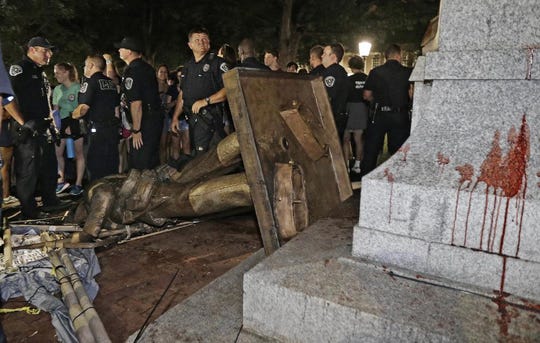 Protesters at the University of North Carolina toppled the statue of a Confederate soldier known as Silent Sam, a fixture on the Chapel Hill campus for more than a century. (Photo: Gerry Broome/AP)

NAACP leaders in Atlanta and Georgia launched a campaign last month to remove all Confederate symbols across the state.

They called on lawmakers to give individual communities discretion to take down statues. They say they would prefer to see them in graveyards or museums with their historical context.

“We are issuing a directive to our elected officials,” said Gerald Griggs of the Georgia State Conference NAACP. “It’s time to bring the country together by removing these vestiges of the past.”

Targets include the massive bas-relief at Stone Mountain, the “Mount Rushmore of the South.”

The 1½-acre carving, the largest of its kind in the world, depicts Davis, Lee and Gen. Stonewall Jackson. Fifteen white men chose the site in 1915 to establish the second Ku Klux Klan. The Klan returned to burn a cross there each Labor Day for decades.

The Atlanta proposal dates to 2017, when then-Mayor Kasim Reed appointed a committee to study what to do with the city’s Confederate monuments. Hale, of the Atlanta History Center, co-chaired the panel.

The Atlanta City Council is expected to vote on the measure soon.

Atlanta Councilwoman Natalyn Archibong said the signs would honor history while also sending a message that slavery and racism shouldn’t be repeated.

“I do think it starts with a conversation an unpacking of how we got here and where do we want to go,” Archibong said.

Man Shot With ‘Sponge Gun,’ Tasers Dies on the Way to Hospital

Snow, ice, and more causing over 4,000 flight changes frustrate commuters across much of US!