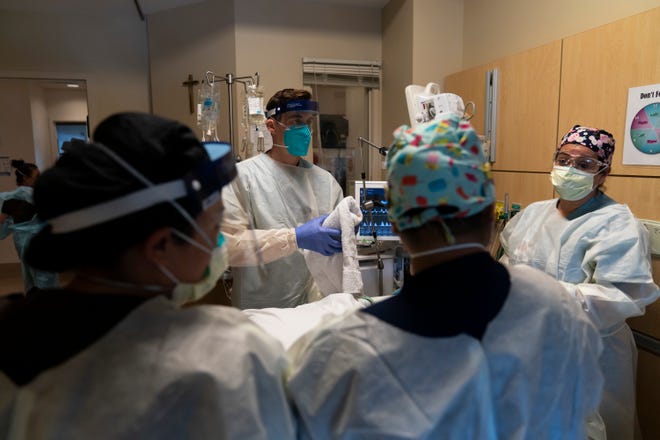 More than 2,900 U.S. health care workers have died in the COVID-19 pandemic since March, a far higher number than that reported by the government, according to a new analysis by KHN and The Guardian.

Fatalities from the coronavirus have skewed young, with the majority of victims under age 60 in the cases for which there is age data. People of color have been disproportionately affected, accounting for about 65% of deaths in cases in which there is race and ethnicity data. After conducting interviews with relatives and friends of around 300 victims, KHN and The Guardian learned that one-third of the fatalities involved concerns over inadequate personal protective equipment.

Many of the deaths – about 680 – occurred in New York and New Jersey, which were hit hard early in the pandemic. Significant numbers also died in Southern and Western states in the ensuing months.

The findings are part of “Lost on the Frontline,” a nine-month data and investigative project by KHN and The Guardian to track every health care worker who dies of COVID-19.

One of those lost, Vincent DeJesus, 39, told his brother Neil that he’d be in deep trouble if he spent much time with a COVID-19-positive patient while wearing the surgical mask provided to him by the Las Vegas hospital where he worked. DeJesus died on Aug. 15.

Another fatality was Sue Williams-Ward, a 68-year-old home health aide who earned $13 an hour in Indianapolis, and bathed, dressed and fed clients without wearing any PPE, her husband said. She was intubated for six weeks before she died May 2.

“Lost on the Frontline” is prompting new government action to explore the root cause of health care worker deaths and take steps to track them better. Officials at the Department of Health and Human Services recently asked the National Academy of Sciences for a “rapid expert consultation” on why so many health care workers are dying in the U.S., citing the count of fallen workers by The Guardian and KHN.