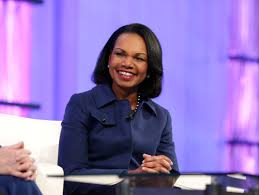 Condoleezza Rice Wants You To Stop Calling People Racist — Even If They Are Condoleezza Rice, who once shopped for Ferragamo shoes while people who looked like her died...
by Jasmin Williams September 20, 2019 307 Views

Condoleezza Rice, who once shopped for Ferragamo shoes while people who looked like her died in Hurricane Katrina, thinks it hurts to call people racist. This appears to be her solution to healing the racial strife in the country.

The former Secretary of State from 2005 until 2009 in the administration of President George W. Bush, told CBS that the White House “needs language that recognizes how raw race is as a factor in America.”

She also added, “But I think we could all be better in the way that we deal with this very raw nerve which is race. I think it’s time to stop labeling each other and using explosive terms like ‘she’s a racist, he’s a racist,’ that stops the conversation. When you say that, that’s meant to stop the conversation and we need to have the conversation.” Watch below around the 6:00 minute mark.

Not calling out racism is insane. Furthermore, Trump’s racism is clear and dangerous: housing discrimination lawsuits in the 1970s, the racist birther movement against Obama, the Muslim travel ban (a federal judge said it was racist), the Exonerated Five (Trump called for the execution of five Black teenagers with a full page ad in theNew York Times in 1989), saying a judge of Mexican heritage could not do his job because he is Mexican and constantly attacking Black public figures (Jay Z, Maxine Waters, Jemele Hill, Colin Kaepernick, etc.), but ignoring people like Eminem… just to name a few.

Even Michael Cohen‘s testimony before the House Committee on Oversight and Reform in March, he said, “He is a racist. The country has seen Mr. Trump court white supremacists and bigots. You have heard him call poorer countries ‘shitholes.’ In private, he is even worse. He once asked me if I could name a country run by a Black person…’ This was when Barack Obama was President of the United States.”

He continued, “While we were once driving through a struggling neighborhood in Chicago, he commented that only Black people could live that way. And, he told me that Black people would never vote for him because they were too stupid.”

In addition, 45 rolled back Obama-era prison reform policies. For example, the Justice Department will use private prisons to house federal inmates, which reverses an Obama-era policy. In addition, as The Washington Post reported, the Trump administration has “Overturned the sweeping criminal charging policy of former attorney general Eric H. Holder Jr. and directed his federal prosecutors to charge defendants with the most serious, provable crimes carrying the most severe penalties reports.” President Barack Obama made more criminal justice reforms than any president in U.S.Trump also ended the 21st Century Task Force on Policing, commissioned by the Obama administration to address tensions between police and the communities they serve. Sessions and Trump rolled this back under their “law and order” mandate.

How Is Kenya Handling Her Divorce?