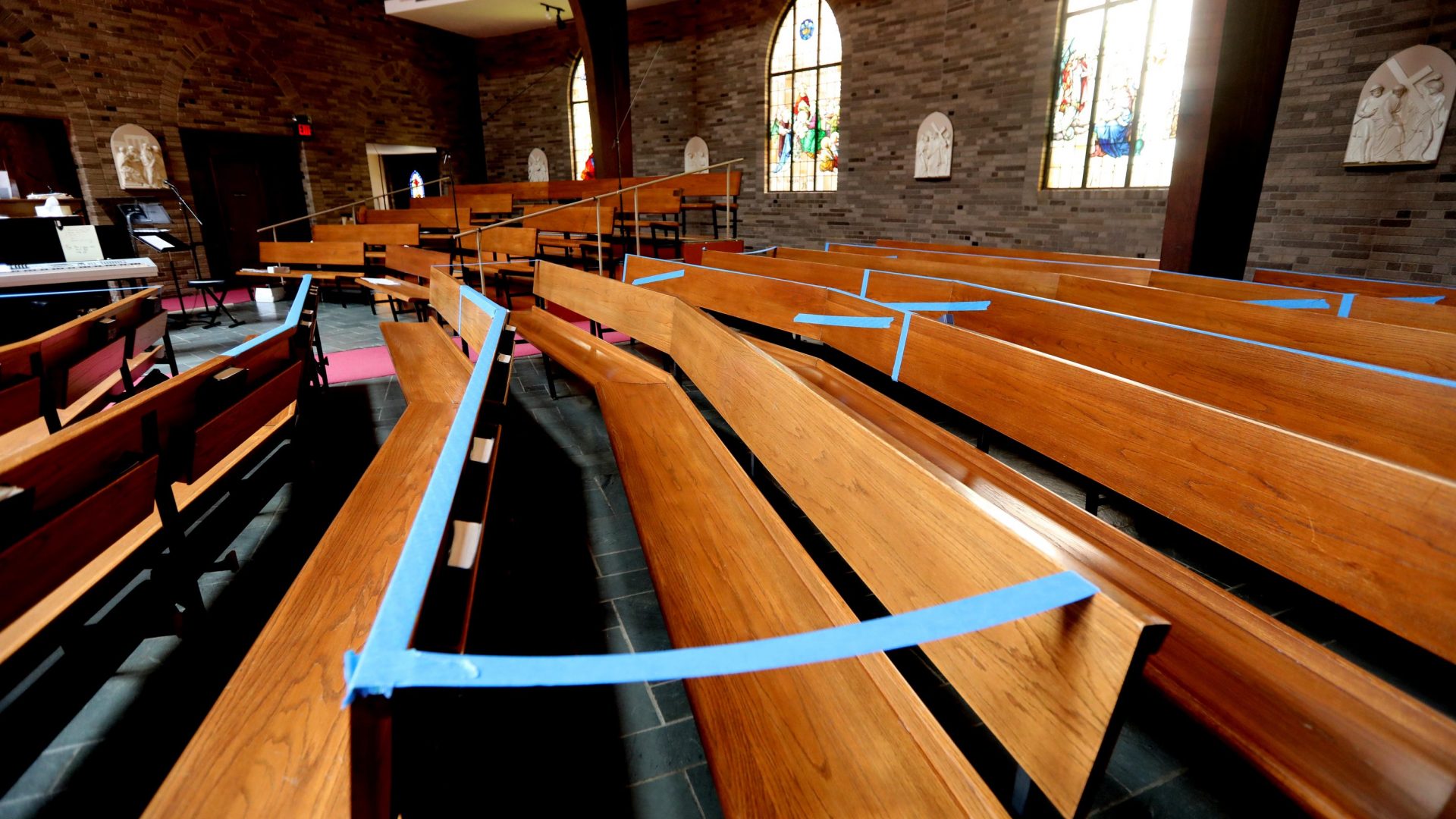 Before the novel coronavirus pandemic, Katie Gress couldn’t remember a time she missed a daily Catholic Mass, even while traveling outside the United States. So when all Masses were...
by Zach Freeman June 29, 2020 80 Views

Before the novel coronavirus pandemic, Katie Gress couldn’t remember a time she missed a daily Catholic Mass, even while traveling outside the United States.

So when all Masses were canceled for nearly three months as part of efforts to halt the spread of Covid-19, Gress called it the worst suffering of her life.

That suffering finally ended June 10, when Gress attended a 7 a.m. Mass inside St. Gregory the Great Church in Amherst for the first time since mid-March.

“The joy to go back and take the Eucharist, I think even if I gained the whole world, it won’t be comparing to that moment of my life,” said Gress, a St. Gregory parishioner for more than 40 years. “For me, it was heaven open to me again.”

With more than 6,300 registered families, St. Greg’s is the largest Catholic parish in the Buffalo Diocese. While many parishioners were enthusiastic about returning, others remained tepid due to worries about the coronavirus, said the Rev. Leon Biernat, pastor.

St. Greg’s offers seven weekend Mass times and has a sanctuary that can seat up to 1,300 people. Attendance at each of the weekend Masses has averaged between 150 and 200 people since state officials said it was OK for houses of worship to offer services at no more than 25% of total capacity, said Biernat.

Those who do show up have been dutiful about registering online beforehand to attend and wearing masks and maintaining social distance, he said. Inside the church, every other pew row is roped off and parishioners are ushered to their seats. Worshipers are discouraged from singing, missalettes have been removed from the pews and entry and exit doors have been restricted.

During Communion, rather than have people line up and process to receive the Eucharist, Biernat and eucharistic ministers go into the vacant pew rows and deliver Communion to anyone who remains standing.

“Honestly, I think it’s faster than if they were lining up,” he said.

Biernat said he’s been trying to keep Masses to 45 minutes or less because some parishioners struggle with wearing masks for long periods of time.

Bill Christ of Amherst said he and his family appreciated the online Masses that Biernat celebrated during the shutdown period, allowing them to worship from home.

“That certainly helped, but it was not like being in the church,” he said. “To be in the church the last few weeks was amazing.”

In Hamburg, Watermark Wesleyan Church’s worship services have been limited to online until Sunday, when Lead Pastor Ken Nash greeted a few hundred mask-wearing members of the congregation in person for the first time in months.

“Amen. So good to see your faces, or your eyes, at least. I’ve been missing your eyes very much,” Nash said at an 11 a.m. service.

The Chapel at CrossPoint in Amherst first reopened for in-person services on June 7.

But on Sunday the church took its worship outdoors, with two parking lot services that drew about 1,100 cars, said Jon Cook, worship and creative arts pastor.

“We actually had planned it when we weren’t sure if we were going to get to reopen or not,” said Cook.

The Chapel was able to increase its capacity by having worship services outside, but it plans to return for the rest of the summer to indoor worship, he said.

Currently, capacity inside is restricted to about 500 people under the state’s 25% capacity guidelines, he said.

But Cook expects that to change soon, especially after a federal judge ruled on Friday that the state can’t limit indoor religious gatherings to 25% capacity if other types of gatherings, such as restaurant seating, are limited to 50%.

“That number is going to grow,” he said.

The Chapel requires worshipers to register online if they plan to attend a service and has hit the maximum registration capacity on the website a few times, said Cook.

Still, he said, “people haven’t necessarily come back in droves, because of the 25% rule, which we’re still waiting for some clarity from New York State on that.”

Cook said church members who have returned have responded positively in surveys of their experience.

“We’re feeling good about the fact that people feel safe coming back into the building and are feeling comfortable joining us in person again,” he said.

Digital Learning Or In-Person Georgia Parents Have To Decide By July 10th.